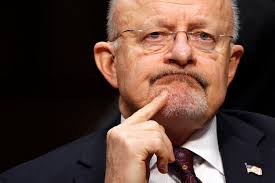 Just as the first casualty of war is said to be the truth, the first casualty of the new Cold War is irony. Our most prominent journalists seem to have missed the Orwellian irony of Sen. John McCain (R-Ariz.) asking Director of National Intelligence (DNI) James Clapper at Friday's Senate hearings if Julian Assange has any credibility. Assange has maintained that the hacked or leaked emails of Democratic Party officials did not come from the Russian government, or any other government.

As is well-known, Clapper lied to Congress about a serious violation of the constitutional rights of tens of millions of Americans. This lie is a crime for which he actually could have been prosecuted. In March 2013, Clapper falsely answered, "No, sir" to the question, "Does the NSA [National Security Association] collect any type of data at all on millions, or hundreds of millions of Americans?"

He later admitted that his answer was untrue.

Clapper lied again in Friday's testimony, saying that Assange was "under indictment" for "a sexual crime." In fact, Assange has not been indicted for anything, and the government of Sweden has never even charged him with a crime. (He was initially questioned by Swedish police but allowed to leave the country.)

In reality, he is a political prisoner, and the United Nations Working Group on arbitrary detention has found that he has been arbitrarily detained since 2010 by the United Kingdom and Sweden, and ordered his release and compensation.

He has offered from the beginning of his political persecution to cooperate with the Swedish authorities in any investigation, and to be interviewed at any time in London. He could not safely return to Sweden without guarantees that he would not be sent to the U.S., where he currently faces a high likelihood of imprisonment (even before any trial) for having published leaked documents that exposed U.S. war crimes and other embarrassments.

For years, neither Sweden nor the U.K. would agree to that because, it appears, their foreign ministries are collaborating with the U.S. government to keep him imprisoned.

For anyone on a jury who had to weigh the testimony of Clapper against that of Assange, it would be a no-brainer. Not only is Clapper a proven and serial liar, but in 10 years of WikiLeaks revelations, Assange has never been shown to have lied about anything.

That said, it is entirely possible the Russian government was involved in the hacking of emails here, and that Assange and WikiLeaks would not necessarily be able to identify the original source of the leaks, which is very difficult to do.

However, we the people have yet to be presented with evidence that Russian hacking is what actually happened.

But the media has become so distracted with the festivities at America's new 1950s theme party, hating on Russian President Vladimir Putin and Russia like there's no tomorrow, that the lack of evidence has become almost irrelevant to the big media conversation.

The DNI report released on Friday, supposedly to provide the public with evidence that the Russian government had indeed hacked emails in order to influence the U.S. elections, contained no actual evidence that they did so. There was a lot of evidence that Trump was the preferred candidate of Putin and his government. But we didn't need evidence for this; pure logic would have sufficed.

Related Topic(s): American Hypocrisy; Assange; Donald Trump; Intelligence; Media; Putin; Wikileaks, Add Tags
Add to My Group(s)
Go To Commenting
The views expressed herein are the sole responsibility of the author and do not necessarily reflect those of this website or its editors.