"I pledge allegiance to my Flag and the Republic for which it stands, one nation, indivisible, with liberty and justice for all."

In these times of hyper-partisanship, the reciting of the pledge has become a competitive sport. I have long noticed that Tea Party types like to emphasize "under God", perhaps to compensate their imagined attacks on their Christianity. In the Trump era, progressives have taken to putting an emphasis on "justice for all" in a display of resistance. Still said out of habit but ignored in deed is poor "indivisible". There is little room for such a quaint notion as the opposing sides prepare to engage in verbal, and sometimes physical, battles.

The truth is that deep divisions have been ingrained in our country since its birth. The men who fathered our nation and who are looked at with great reverence only counted some humans as worth 3/5 the value of others and excluded women from all the rights granted "we the people". Still, they were able to set aside their differences and compromise their moral principles to set a foundation that could be improved upon. The greatness America has not always been about our accomplishments but what we aspired to be.

Aspiration is a powerful trait that will not allow a permanent compromise with evil. Eventually, our nation paid the price for its original sin with the Civil War. This purged us of slavery, but not its residual effects. Black Lives Matter is an attempt at drawing attention to how the past echoes into today. Unfortunately, those who would benefit the most from hearing their message are too busy vilifying the messengers to listen. Instead of providing a starting point for dialog it shows just one more way that we are divisible.

As a progressive in the age of Trump, it is important to realize how much our country changed in my lifetime. I remember the feeling of pride as we elected Obama, the first African-American president, an accomplishment that I did not truly believe was possible. Yet, in that same election, California voters voted to discriminate against people based on their sexual orientation with the passage of Proposition 8. Just a few years later the Supreme Court legalized same-sex marriage on a nationwide basis. The winds of change were blowing at hurricane levels.

On November 8, 2016, further change seemed imminent with the breakage of the glass ceiling and the election of our first woman president. Instead, the presidency was handed to a man with no government experience who propagated the Birther movement that tried to delegitimize President Obama, ran six companies into bankruptcy and had so little respect for women that he bragged about being able to "grab 'em by the p*ssy." What could go wrong? 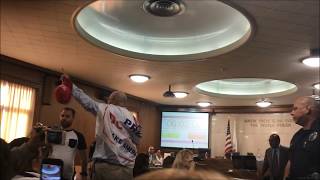 The election of Trump has brought the deep divisions within our country out into the open. My fellow progressives have stood their ground, determined to protect the hard-fought changes of the Obama years, drawing insults and sometimes violence from their opposition. Bigots who would like to make America great again by returning to the days when they did not have to hide their hatred have been emboldened by the Trump presidency and feel free to show the real content of their character. The Republicans control all three branches of government, but Trump complains that it is the Democratic minority who is obstructing progress. Meanwhile, right-wing mobs shut down city council meetings, obstructing local politicians from doing the work of the people.

The unwillingness of the right to condemn Russian meddling in our elections shows that even a common enemy cannot inspire cohesion in today's political life. Their liberal use of "alternative facts" means the real debate about policy is out of the question. Progressives should not acquiesce to the right's fear of change by compromising on the rights of women and minorities. Clearly, we are divisible. Can we remain one nation under these circumstances?

Related Topic(s): Compromise, Add Tags
Add to My Group(s)
Go To Commenting
The views expressed herein are the sole responsibility of the author and do not necessarily reflect those of this website or its editors.