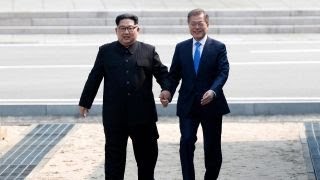 Holy Smoke, who could have written a better agreement for the first meeting between South Korean President Moon Jae-In and North Korean Chairman Kim Jung Un -- the first time a leader from North Korea has set foot in South Korea in 65 years -- since the end of the Korean War.

In a day filled with remarkable scenes of the two leaders meeting in South Korea, then stepping back into North Korea, talking as equals, with respect toward each other, incredible, historic statements of peace and reconciliation, calling for a new era for peace after suffering so much hostility.

Elements of the agreement are:

--No more war on the Korean peninsula.

--Cease all hostile Acts on Land, Sea and Air.

--Family Reunions between North and South Korea on August 15.

--Transform the DMZ into a "Peace Zone."

The full text of the joint declaration issued at inter-Korean summit is below...

PANMUNJOM, April 27 (Yonhap) -- The following is an unofficial translation of the full text of a joint declaration signed and issued by South Korean President Moon Jae-in and North Korean leader Kim Jong-un at the end of their bilateral summit held Friday at the Joint Security Area of Panmunjom inside the heavily-fortified Demilitarized Zone that divides the two Koreas.

Panmunjeom Declaration for Peace, Prosperity and Unification of the Korean Peninsula

During this momentous period of historical transformation on the Korean Peninsula, reflecting the enduring aspiration of the Korean people for peace, prosperity and unification, President Moon Jae-in of the Republic of Korea and Chairman Kim Jong Un of the State Affairs Commission of the Democratic People's Republic of Korea held an Inter-Korean Summit Meeting at the 'Peace House' at Panmunjeom on April 27, 2018.

The two leaders solemnly declared before the 80 million Korean people and the whole world that there will be no more war on the Korean Peninsula and thus a new era of peace has begun.

The two leaders, sharing the firm commitment to bring a swift end to the Cold War relic of longstanding division and confrontation, to boldly approach a new era of national reconciliation, peace and prosperity, and to improve and cultivate inter-Korean relations in a more active manner, declared at this historic site of Panmunjeom as follows :

1. South and North Korea will reconnect the blood relations of the people and bring forward the future of co-prosperity and unification led by Koreans by facilitating comprehensive and groundbreaking advancement in inter-Korean relations. Improving and cultivating inter-Korean relations is the prevalent desire of the whole nation and the urgent calling of the times that cannot be held back any further.

' South and North Korea affirmed the principle of determining the destiny of the Korean nation on their own accord and agreed to bring forth the watershed moment for the improvement of inter-Korean relations by fully implementing all existing agreements and declarations adopted between the two sides thus far.

Ann Wright is a 29-year US Army/Army Reserves veteran, a retired United States Army colonel and retired U.S. State Department official, known for her outspoken opposition to the Iraq War. She received the State Department Award for Heroism in 1997, after helping to evacuate several thousand (more...)
Related Topic(s): Agreement; North Korea And South Korea Talks, Add Tags
Add to My Group(s)
Go To Commenting
The views expressed herein are the sole responsibility of the author and do not necessarily reflect those of this website or its editors.