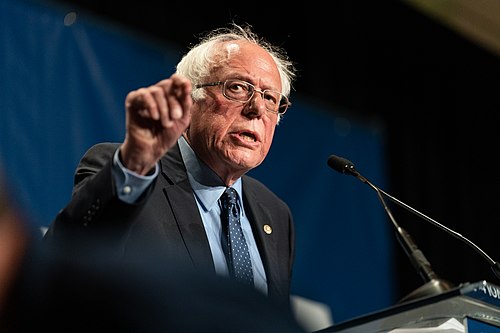 Why is Bernie still refusing to say anything at all re: his unlikeliest "defeats" in this election cycle -- in Iowa, Massachusetts and elsewhere? If he thinks doing so would make him "a sore loser," he hasn't read today's NYTimes, which has already gleefully (and illiterately) depicted him as "an aggrieved outsider" for blaming various other "factors"everything except election theft -- for his improbable "decline" against the ludicrous Joe Biden. (See below.) So if his muteness on the all-important subject of our rotten voting system is his effort not to seem unsportingly "aggrieved," he should ungag himself ASAP, because that effort is a failure -- and American democracy will be absolutely fucked beyond salvation if he doesn't do the right thing and speak up at last, as Jill Stein (very bravely) did last time.

Let me be still more blunt about the man whom I've supported all along (with some misgivings): Bernie's failure to say anything about that crucial subject is especially contemptible because one "factor" that he has now "cited" is the failure of "young voters" to turn out for him. "Let me tell you the bad news, to be honest with you: young people vote at much lower rates than older people," he told a young crowd in St. Louis Monday morning. "All right? That is the facts [sic]. I hope all of the old people vote, that's great, but I want young people to vote at the same rates."

So how does Bernie know that those young people have stayed home? How does he know that many of them didn't try to vote, didn't have their votes erased, flipped, or fractionalized? Does his campaign know nothing of the tricks and tactics that were used to steal the Democratic nomination four years ago, and that are evidently being used again? If they and he don't know, they're either ignorant, or -- in denial -- or playing their part in the pro wrestling spectacle that is "American democracy" today.

We know that they're not ignorant, because a lot of activists have clued them in, with rising desperation; and it's unlikely that the man and his campaign are in denial vis-a-vis election theft, since Bernie is a seasoned politician, and election theft is plenty older than himself. This leaves the chilling possibility that Bernie -- like John Kerry in '04 -- is only playing the role of challenger, and will step back once Biden stumbles to the-fore, or (take a sip of dramamine) when Hillary rides her broomstick to the rescue; and when Joe and/or Hillary, or maybe Liz, steps in to save "the center" from the rest of us, he -- Bernie -- will surrender to "reality," and help the Democrats deliver the United States from Orange Julius.

Of course, it's possible that Bernie won't cave in like that, but would respond by doing something arguably cool like making a third-party bid, with Tulsi at his side. That would be cool -- if the USA had a legitimate voting system (like in Venezuela). Since We the People don't have such a system, no third party can do anything but help "elect" whichever of the "choices" on the menu the election gremlins, and their masters, have decided on, and then that theft, however flagrant, will be handily "explained" as the result of that third party having hurt the "losing" candidate (as Nader has been wrathfully -- and wrongly -- blamed for Al Gore's losing Florida back in 2000).

And so -- again -- we need to reaffirm our right to vote, and to have our votes all counted fairly and transparently, before we can get anywhere but here.

Mark's new book, Loser Take All: Election Fraud and the Subversion of Democracy, 2000-2008, a collection 14 essays on Bush/Cheney's election fraud since (and including) 2000, is just out, from Ig Publishing. He is also the author of Fooled Again: The Real Case for Electoral Reform, which is now out in paperback (more...)
Related Topic(s): Bernie Sanders; Bernie Sanders 2020; Democrats; Election Fraud; Election Theft; Elections And Campaigns; Gore Al; John Kerry, Add Tags
Add to My Group(s)
Go To Commenting
The views expressed herein are the sole responsibility of the author and do not necessarily reflect those of this website or its editors.

This bill will kill small farms, and wreck our food supply

Scott Walker Goes To Chicago, Gets His Mic Checked! (Must-See)

Peter B. Collins going off the air

Obama won by MILLIONS MORE than we've been told