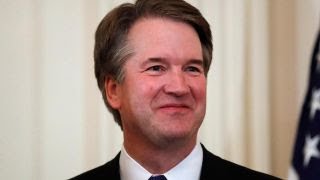 Although he professes to interpret the Constitution as written by the founders, Kavanaugh has apparently overlooked the supremacy clause and simply scorns customary international law.

Jordan Paust, international law scholar and professor emeritus at University of Houston Law Center, told me in an email, "The unanimous views of the Founders, Framers, and Supreme Court Justice opinions is that the President and all members of the Executive Branch are bound by international law." Paust also referenced a 2016 article he wrote in the Houston Journal of International Law documenting this fact.

Kavanaugh, however, erroneously conflates international law with foreign law. The U.S. agrees to the terms of treaties it ratifies. And in most instances, the United States can opt out of a customary international law norm if the U.S. objected while the norm was being developed. Foreign law, on the other hand, is the law of other countries -- such as French law, German law, etc.

In the 2016 case of Al Bahlul v. United States, a Guanta'namo detainee argued that since "conspiracy" was not an offense under the international laws of war, he should not be tried for conspiracy before a military commission.

Kavanaugh's concurrence in that case characterized al-Bahlul's argument as "extraordinary" because "it would incorporate international law into the U.S. Constitution as a judicially enforceable constraint on Congress and the President."

That would mean, Kavanaugh cynically wrote, that wartime decisions made by the president and Congress to try unlawful enemy combatants before military commissions "would be subject to the dictates of foreign nations and the international community, as embodied in international law."

Kavanaugh and the War on Terror

For 12 years, while serving as a judge on the D.C. Circuit Court of Appeals, Kavanaugh had the opportunity to rule on several cases stemming from the "war on terror." In nearly all of them, he demonstrated nothing but disdain for international law and an uncritical deference to executive power.

During the Bush administration, the Supreme Court checked and balanced the executive branch in several war on terror cases. They included Rasul v. Bush (which established that federal courts have jurisdiction to hear Guanta'namo detainees' habeas corpus petitions); Hamdi v. Rumsfeld (which held that a U.S. citizen held as an enemy combatant has due process rights to contest his or her detention); and Hamdan v. Rumsfeld (which concluded that Bush's military commissions violated the Uniform Code of Military Justice and the Geneva Conventions).

In 2008, the high court ruled in Boumediene v. Bush that Guanta'namo detainees held as enemy combatants have the right to file habeas corpus petitions in U.S. federal courts to challenge their detention.

But in the wake of the Boumediene decision, Kavanaugh tried to neuter detainees' habeas corpus rights in cases that came before him on the Court of Appeals, such as Omar v. McHugh and Uthman v. Obama. University of Texas law professor Stephen Vladeck noted in a 2011 article that since Boumediene was decided, commentators "have accused the D.C. Circuit in general -- and some of its judges in particular -- of actively subverting [Boumediene] by adopting holdings and reaching results that have both the intent and the effect of vitiating the ... decision."

"Prominent among those judges is Kavanaugh," Edith Roberts wrote at SCOTUSblog.

Related Topic(s): Foreign Policy Failure Iraq; International Law; Judge Brett Kavanaugh; Laws; Power; President; Supreme Court Nominee; Unconstitutional, Add Tags
Add to My Group(s)
Go To Commenting
The views expressed herein are the sole responsibility of the author and do not necessarily reflect those of this website or its editors.