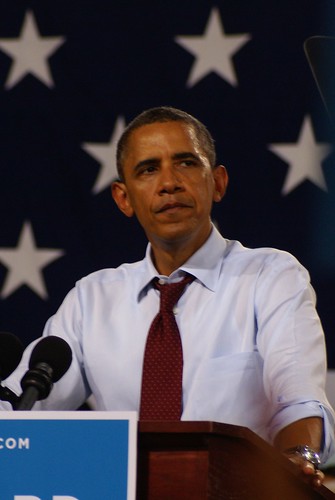 President Barack Obama Owner: marcn at flickr.com/people/37996583933@N01/ License: Attribution
(Image by marcn)   Details   DMCA
Former US Attorney General Ramsey Clark has often reminded people that the Nuremberg Principles of International Law long enshrined in the UN Charter, are by Article Six of the US Constitution, an integral part of the law of the land.

Noam Chomsky, Prof. Emeritus of MIT, long considered the dean of dissent in America, warned in 1991,"Every US President after the Second World War would have been hanged if tried under the same Nuremberg Principles, which the Nazis were tried under," and Chomsky has continued to repeat and update his statement to include recent presidents Clinton, Bush Jr., and Obama.

Only two years after Barack Obama assumed the presidency, OpEdNews, among other independent newsletters published an article by this writer, an archival research peoples historian working for some years for Ramsey Clark titled: No US President Hanged Under Nuremberg Principles Obama Bellicose Bombs On Tempts Fate Obama is playing out his front man role in the world political economy of America's wild capitalist imperialism. That we, with all the wonderful ordinary Americans around us follow a fool is lamentable. Those who accept his leadership and encourage his homicidal foolishness are even more pathetic than Obama. If he ever stands trial for crimes against humanity, in the eyes of the world, we will be in the dock alongside him.

Prof. Cornel West of New York's Union Theological Seminar and Princeton University's Center for African American Studies, after being earlier in favor of Obama's election, has often called America's first imperialist African American President, "a black mascot of Wall Street oligarchs and a black puppet of corporate plutocrats, heading up the American killing machine and proud of it," and has kept pointing out that Obama was put in office by arch criminals like David Rockefeller to fool the non-white world into believing America with a black president would be less imperialist and less murderous.

Related Topic(s): Barack Obama; Genocide; Justice, Add Tags
Add to My Group(s)
Go To Commenting
The views expressed herein are the sole responsibility of the author and do not necessarily reflect those of this website or its editors.