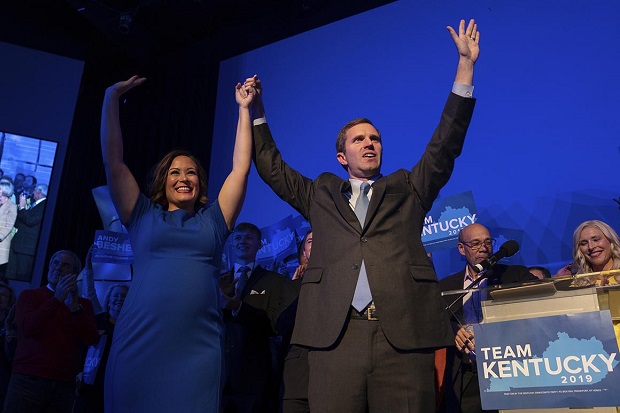 Frankfort, the capital of Kentucky, which most people get wrong in trivia contests, may soon be in the headlines around the world. What Republican state Senate President Robert Stivers said about the close gubernatorial election that saw Democratic Attorney General Andrew Beshear edge out a close victory over Republican incumbent Matt Bevin, a Trump loyalist, should normally shock the nation. But in the era of Trump, taking non-democratic actions to maintain political power is the new reality.

Showing once again that if Republicans cannot win an election, they will simply steal it, Stivers suggested that the Republican-controlled state legislature could ultimately decide the victor of the gubernatorial race. With all precincts reporting, Beshear declared victory over Bevin with about a 5100-vote margin. Although Secretary of State Alison Lundergan Grimes declared Beshear the winner of the race, that did not stopped Stivers and other Trump loyalists in the commonwealth from suggesting that Bevin could be ultimately be declared the winner by the state's highest courts working in conjunction with the GOP-controlled Kentucky General Assembly.

Stivers reasons that the 2 percent won by Libertarian candidate John Hicks, should have gone to Bevin. Stivers, therefore, has suggested that the General Assembly might simply add Hicks's vote count to that of Bevin, thus ensuring Bevin's re-election to another four-year term. It should be noted that Bevin lost his re-election, in part, due to his scrapping the popular Affordable Care Act, which provided coverage under programs like KentuckyCare to rural parts of his state.

Bevin has refused to concede the election to Beshear, citing unspecific "irregularities" in the voting. Bevin had no qualms about accepting his 2015 victory over Democratic candidate James Comer with an 83-vote margin. Under Kentucky law, there is no automatic recount. However, Bevin has the right to petition the Franklin Country Circuit Court for a recanvassing thirty days following the certification of the election by the State Board of Elections. Bevin could also request a recount, for which he would be required to pay the costs. Stivers believes that if the governor's race ends up in the courts, the ultimate arbiter of the election could be a joint session of the Kentucky General Assembly, which Stivers and his Republican colleagues control, following a decision favorable to Bevin rendered by Kentucky Court of Appeals or the Kentucky Supreme Court.

The last time the General Assembly decided on a governor's election was in 1899. Democrat William "Boss Bill" Goebel lost the election to Republican William S. Taylor, edging out Goebel by 2,393 votes. The three-man state Board of Elections, all Goebel cronies, decided by a 2-1 vote that the General Assembly should decide on what irregular Taylor votes should be counted or not. The Assembly declared that enough Taylor votes were invalidated that the election went to Goebel, even though Taylor had already been sworn in as governor. After the Assembly's decision, the commonwealth was on the verge of civil war. On January 30, 1900, Goebel was shot and seriously wounded at the state capitol building in Frankfort. On February 1, Goebel was sworn in as governor. On February 3, Goebel died. Most Kentuckians would prefer not to remember the last time the General Assembly selected a governor. However, that is not the case with Bevin or Stivers.

The 2020 presidential election should serve as a stark reminder of the Republican Party's opposition to the democratic principle of "one person, one vote." In election after election since 2000, the Republicans have conceived various methods to game elections, including suppression of targeted electorates through caging voter registration lists and closing or moving polling locations, relying on vote-altering direct-recording electronic (DRE) machines, and distributing bogus election or candidate information via mail, social media, or flyers.

Some political observers believe that Donald Trump, who appeared at a Lexington rally for Bevin on the eve of the election, is urging Bevin, Stivers, and others to contest Beshear's victory as a trial balloon for what Trump might decide on doing if he should lose his own re-election bid. During the Lexington rally, Trump made several comments about his staying in office well beyond the constitutional two-term limit for the president. Trump 2020 campaigner manager, Brad Parscale, made an ominous statement in claiming that Trump "dragged Bevin across the finish line." Parscale, whose fingerprints are all over the misuse and abuse of social media data manipulated by Cambridge Analytica in the 2016 presidential election, appeared to be saying that Bevin had eked out a narrow win over Beshear, which, of course, is not true.

The smoke signals being sent aloft in Kentucky point to Trump refusing to concede a loss in the 2020 election and having the Republican-controlled U.S. Senate and/or the U.S. Supreme Court decide the outcome in his favor.

Meanwhile, the people of Kentucky, who voted out the unpopular Bevin at the ballot box, may still be faced with the possibility that Trump loyalists, combined with crooked attorneys and bought-off state judges, could keep Bevin in the Kentucky Governor's Mansion for another four years.

Related Topic(s): Andy Beshear Governor Of Kentucky; Democratic; Donald Trump; Governors; Kentucky; Kentucky Elections; Kentucky Politics; Matt Bevin; People; Republican; (more...) State; Trump, Add Tags  (less...)
Add to My Group(s)
Go To Commenting
The views expressed herein are the sole responsibility of the author and do not necessarily reflect those of this website or its editors.