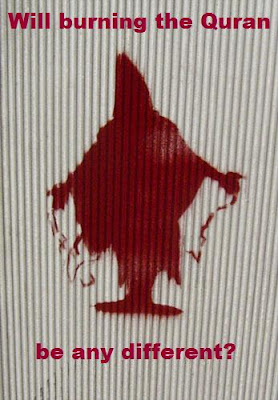 "But in America, there is the

freedom to be ignorant"

Today I looked up the definition of inflagrante delicto: it comes from Latin - "in a blazing offence" - from which we get the term "caught red-handed." So it may be it ironic that the act of burning a religious holy book has brought out the Christian Right's Islamophobia: it's been there all along, but this time it was caught in the act just as its homophobia was caught in the act with Fred Phelps' antics at Matthew Shepard's funeral.

And while we might argue that anything associated with Westboro Baptist Church would be discounted as in bad taste, an ally of the church - the Dove World Outreach Center of Gainesville, Fla, however, is trying to prove that bad taste can be deadly. In a news item that summarily falls into the WTF? category:

(CNN) -- The U.S. commander in Afghanistan on Monday criticized a Florida church's plan to burn copies of the Quran on September 11, warning the demonstration "could cause significant problems" for American troops overseas.

And to further solidify the proof of his idiocy, Pastor Jones of Dove World Outreach Center

...insists the event is "neither an act of love nor of hate," but a warning against what it calls the threats posed by Islam.

The website of Dove World Outreach Center (activew membership - 50) is a chilling affair, primatily because he so purposely demonizes Islam and the Christian Right's usual targets (the LGBT community and Obama, e.g.) referring to them all as "evil." The undertone of "destroy them before they destroy us" is so prevalent that it renders his "neither an act of love nor hate" statement totally meaningless. He expounds on the "unbelivable cruelty" of radical Islam while negating the fact that his rhetoric will cause harm to Muslims in this country because, of course, there are no Muslims in America who are not part of radical Islam.

BTW: Jones boasts that he has never read the Quran.

There is, of course, a plethora of Christian leaders calling the proposed September 11th International Burn A Koran Day an abomination. The most insightful and glaring protests, however have come from the Gainesville, FL communities. One of them has a website to which people can affix their name to a petition

From Please Don't Burn The Koran:

Rev. Dan Vojir is has been writing/blogging on religion and politics for the better part of ten years. A former radio talk show host (Strictly Books €" Talk America Radio Network) and book publisher, Dan has connected with some of the most (more...)
Related Topic(s): America Is A Christian Nation; Bigotry; Book Burning; Bryan Fischer; Christian-taliban; Christians Only; Dove World Outreach Center; Evil; Koran; STUPIDITY; (more...) Terry Jones, Add Tags  (less...)
Add to My Group(s)
Go To Commenting
The views expressed herein are the sole responsibility of the author and do not necessarily reflect those of this website or its editors.