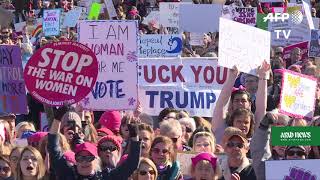 On Nov. 6, American women will rise up at the polls, in such large numbers and with such determined resolve, that Democrats will regain control of the House and make a strong run to win control of the Senate.

2018 will be the year when American women say no to President Trump and the brand of politics he represents. They are fearful of his anger and rage, appalled by his politics of destruction and alarmed by his attacks against their rights, including his intensely repeated vow to achieve the reversal of Roe v. Wade.

2018 will be the year when American women say no to the perpetual politics of division and humiliation that Trump has brought to our daily national life.

2018 will be the year that American women say no to a politics based on fear and anger by a president who views America not as a great and diverse national family, but as a battleground of warring tribes fighting bitter feuds against our neighbors.

2018 will be the year that American women say no to a president who has insulted a long list of women he disapproves of, most recently the chancellor of Germany and the prime minister of Great Britain, while his fixer arranged payoffs to keep secret the dark side of his private affairs.

2018 will be the year that American women say no to an immigration policy so hostile to family values that boys and girls were placed in cages and ripped apart from their mothers and fathers.

2018 will be the year that American women revolt against GOP health-care policies that attack Planned Parenthood, which has always received strong bipartisan support, while Trump seeks to overturn Roe v. Wade and strip insurance coverage from patients with preexisting conditions.

Of course when I refer to "American women" I mean the majority of American women who disapprove of Trump and are so fearful, offended and appalled that they are hypermotivated to vote in much larger than expected numbers.

While there is a surge of enthusiasm among the vast Democratic and liberal base, a surge of anti-Trump sentiment among a growing number of moderate and suburban Republican voters, and increased voter registration appealing to black and Hispanic voters, the two groups whose turnout will skyrocket above historical levels in the coming midterms are women and young voters.

When I marched with the Women's March in Washington, and later with the students who marched on Washington, I was struck by how both marches brought surges of voter registration. The women and student marchers have grown into a national movement and cause of registering and turning out voters.

Opposition to Trump has fueled a powerful surge of high-quality female Democratic candidates for office at all levels, in all states. Fear of Trump mobilizes women to action, making donations large and small to good candidates and causes. Anger about Trump and the desire to bring change against Trump inspires a generation of female voters, young voters, black voters, Hispanic voters and others to register a wave of new voters who will turn out in droves in November.

2016 was the year when Hillary Clinton defeated Donald Trump for president by almost 3 million popular votes, leaving Trump with an obsession so abnormal he compulsively attacks her almost two years after the election!

2017 was the year when women rose up with a fury, supported by the men who love them, against those who abuse them.

Related Topic(s): 2018 Elections; Anti-trump; Trump Hypocrisy; Trump Sexual Abuser; Women Against Trump, Add Tags
Add to My Group(s)
Go To Commenting
The views expressed herein are the sole responsibility of the author and do not necessarily reflect those of this website or its editors.