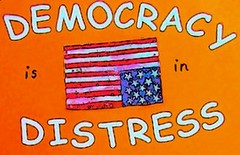 Democracy in distress
(Image by jarnocan from flickr)   Details   DMCA

Democracy is hanging on by a thread not due to marauding Trumpsters -- but because of bipartisan support for neoliberal policies.

The impeachment circus has mercifully come to an end. The public have endured rank hypocrisy and a cynical show meant to give both parties cover for their wrong doing. The Republicans defended Donald Trump on the charge of inciting an insurrection because that's what their people want them to do. Their rank-and-file members are Trump defenders, and senators took a risk if they voted to convict the man who garnered more than 74 million votes in his losing effort.

As usual the Democrats want to look like an opposition party without really opposing anything. They made media stars of their impeachment managers, who talked a lot about the need to punish Trump for the January 6 Capitol riot and the threat to democracy if that didn't happen. It wasn't hard to make the case that Trump's claims of election theft were the impetus for the mob attack. But in the end they preached to their choir, while hyperventilating over video footage of Mitt Romney and Chuck Schumer running down hallways.

But in the end, they did what their party always does. The plan was to kick Trump while he was down, repeat ad nauseum how bad he is and distract attention from their collusion in the duopoly. Democrats knew they wouldn't get the two-thirds majority vote in the Senate that was needed to convict. After weeks of hyperbole and a vote to call witnesses, they chose not to in exchange for reading a statement into the record. They made a mockery of claims that the sky was falling.

Cheap praise was the order of the day. Black Capitol police officer Eugene Goodman's name is now a household word simply because he did what he was paid to do. He led an angry mob away from senators he is charged with protecting. As a result of doing his job he has been lauded by Congress and the media. He was already invited to escort Kamala Harris to the inauguration but the accolades don't stop.

The New York Times calls him a "reluctant hero" but pours on the propaganda just in case Goodman continues to demur. We learn that he served in the army in Iraq, where he was sent to kill people. (That is the point of the military after all.) According to the Times he was "calm, cool, and collected under fire," "serious and focused," yet "quick with a joke," and that his commanding officer "trusted my life with him." He and others in the Capitol police force will be given the Congressional Gold Medal, an obscure honor but now useful to the fake opposition as they use bait and switch to cover their tracks.

Meanwhile, the stimulus with its inadequate help for working people winds its way through the process. No wonder democracy is said to be on its last legs. It certainly is, but not because Trump loving yahoos overran the capitol building.

Democracy is hanging on by a thread because of bipartisan support for neoliberal policies. Democrats and Republicans alike depend upon their respective donor classes and do their bidding. If the rulers want workers back on the job, and they do, they certainly don't want generous income support to become law. That simple fact must be kept hidden with lofty yet phony rhetoric about the U.S. being a good and honorable nation ruined only by the presence of Trump in the White House.

The Democrats can always be counted on to give themselves away. After the vote to convict predictably failed, Nancy Pelosi opined, "Our country needs a strong Republican Party." She needs a strong Republican Party to help cover up her wheeling and dealing. They are a convenient foil who can be blamed whenever the Democrats decide to take a dive. The issue may be Medicare for all, raising the minimum wage, or increasing stimulus payments. Anything that the people need will not be on the agenda.

In a supreme irony of history, the day the trial ended was the 30th anniversary of a U.S. war crime. February 13, 1991, was the day an Iraqi civilian air raid shelter was bombed by U.S. forces. More than 400 people were killed but George H. W. Bush was never impeached for that offense, the rest of the Iraq crime spree, nor for his attack on Panama in 1989.

Impeachments are political affairs, show trials meant to impress the rubes. True criminality that kills people is defended by the political establishment and is never punished. Trump could be impeached for killing thousands of people with sanctions but that will never happen.

But this chapter of name calling and finger wagging is over. It is time for Democrats and Republicans to get back to the business of doing nothing that the people need them to do.

His crime was becoming the accidental president and continuing to behave as an accidental outsider for the next four years. One doesn't turn a mob loose in the Capitol without consequence.

Related Topic(s): Bipartisan; Democracy; Impeachment Trial; Media Corruption; Trump, Add Tags
Add to My Group(s)
Go To Commenting
The views expressed herein are the sole responsibility of the author and do not necessarily reflect those of this website or its editors.