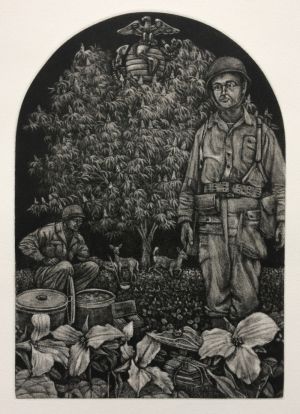 American Veterans and Foreign Allies Deserve More than a One Day Salute
(Image by Akemi Ohira)   Details   DMCA
I stopped laughing at Conservative Republicans when they elected Nixon twice, didn't celebrate Nixon's resignation to avoid Impeachment, but now, it's about more than a president. It is a movement encouraging armed fear to rise again in repetition of sins against humanity.

Primed by men who are redefining America in their own image, speaking language designed to incite our violence against each other, confirms, it's not just Trump, his limited worldview, nor the narrow mindedness of his VP, Mike Pence.

Long before our Civil War and for decades after our saving the world from Nazism and Fascism - following 1963 Dallas assassination, our Fourth Estate glued itself, and us, to repetitious myopic reporting aiding and abetting America into, a nation divided.

Enter the money changers, men like Adelson, Koch(s), Robert Mercer and our unknown unknowns, cashing in on their post WWII investment to assuage their colossally uncontrollable need to curb our freedom at all costs to us reducing our lives to their chump change - from Dulles brothers, Joe McCarthy, Kent State, Watergate, inaugural delayed release of fifty-two American diplomats and citizens, Trickle Down, Iran Contra, Bush/Cheney, perpetual oil war(s), Kavanaugh to a House of Ms. Stefanik, Mr. Conaway and Jim Jordan deserting their oath to the Constitution, in favor of a pledge of allegiance to the 45th president and his executive house of ill repute.

No, not just Trump, but his administration, advisers, deals, and his family; consequently, impeaching Trump will not make America what we thought America was, again - as long as lying to We the People in order to get elected, to elect personal gain, is not a high crime or at least, misdemeanor.

Those denying Trump's divisiveness has awakened a legion of haters fueled by the fear of losing their inglorious supremacy, are the alliance chiseling away at the vital pillars of our potential for a free society secure in its faith in, justice for all.

So, Trump/Pence is hardly the first time America has been knocked down and counted out, only to rise again above the fray of mob rule, worshiping a new demagogue du jour. Sadly, we've been here before, glazed over, willingly reelecting leaders who allow themselves to be rented by America's worst systemic hackers of our Constitution: both greed of Corporate Boards of Directors directing our branches of government through puppetry, and what was never defeated in 1865 now released to turn off our affection for each other.

Wake up: America is caught in the web of a political party that long ago abandoned the statutes of Abraham Lincoln, turned its back on Theodore Roosevelt's environmental dreams, deserted both Veterans and our children's climate future - all for a president sacrificing Ukrainians and all our allies, to preserve, protect and defend Vladimir Putin.

We need spare another generation of young Americans the over the top-heavy oppression of powerful older white men prioritizing profit over people and planet remembering most under thirty-five don't vote, and those who do, State Governments, not Russians, suppress the votes of College and University students.

Being both embroiled and enthralled with live coverage of Nixon-like conduct unbecoming, on steroids, let us try to see through the thinly veiled hypocrisy of trumped Republicans with the civil unity of Middle Class families, the working poor, descendants of America's immigrant forebears, Dreamers, the fallen we memorialize every May, Veterans who need our thanks and support beyond one November day and finally through the creative challenge of a thirty-five year-old, Francis Scott Key.

According to the New York Times , the Trump White House is a toxic stew of personality disputes, policy differences, political rivalries, ethical debates and a fundamental rift over the president himself.

Worse still perhaps: when an Exxon CEO and a Marine four star General think the embodiment of The Peter Principal is America's best hope, you're in danger girl.

Might I suggest we remain vigilantly focused on the welfare of all the Trump Administration has sacrificed:

In the midst of self-serving, reelect me please, political rhetoric, most Americans retain more in common with the heroism of Marie Yovanovitch, than increasing gun violence.

Remember too, our Declaration of Independence from leaders abandoning, the consent of the governed - choosing instead to be a destructive government, We the People have the right to alter Mitch McConnell's Republican Senate, abolish the Trump/Pence anti-American Administration and re-institute a renewed government of, by and for the people in solidarity with: You can't promote principled anti-corruption action without pissing off corrupt people.