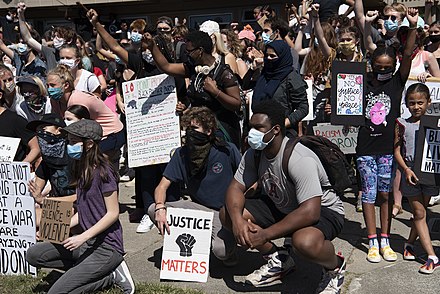 The Saker writes that "the systemic collapse of the US Society has begun." Actually, US societal collapse has been underway for a long time. What The Saker means is that now it is obvious.

Organized violence and looting in many American cities with pre-deliveries of bricks as weapons of destruction. Police and government officials kneeling in submission to the rioters, thus encouraging the rioters in their actions. The police unsupported and standing down. Destroyed businesses. Looters emptying even the big box stores. Enormous economic loss. As I wrote, "the external cost of one Minnesota cop is very high."

I should have said, "the external cost of American police training is very high." US police are trained in Israeli practices that view protesters as enemies justifying very aggressive restraint techniques. The training produces such a high level of police anxiety that police feel compelled to handcuff 5-year olds before putting them in a squad car. I doubt the Minneapolis police officer meant to kill George Floyd by employing a restraint technique that is taught to the police. The Minneapolis cop was a catalyst, not the cause of consequences set in motion with the second round of Reconstruction imposed on the South.

The first Reconstruction had to be closed down because its excesses were giving rise to a guerrilla movement in the invaded and occupied South. The second Reconstruction was the integration of neighborhood schools by force rather than by persuasion. Force required denunciation, and the white liberals enjoyed their self-righteousness as they sowed the seeds of racial hatred. In the South I grew up in there was no hate. People don't employ people they hate to look after their children, cook their meals, run their households, and people who hate don't perform these tasks for those they hate.

As Richard Weaver said, "ideas have consequences." We are now experiencing the consequences of decades of teaching black Americans to hate white Americans and of teaching white Americans to accept guilt for the black slave trade that originated in the black Kingdom of Dahomey in 1600. A black labor force was inherited by the United States and by the Confederate States of America. It was the gift of history. But in the history that is mistaught, the inherited institution of slavery was imposed on black people by white supremacy.

These lies that have been institutionalized in American education are inconsistent with a diverse multicultural society and are now visibly at work unraveling it.

The Saker thinks that there is no going back from George Floyd. Blacks have gotten away with massive looting. Antifa is not being held accountable for massive violence and property damage. The Democratic and media establishments are using the events against President Trump and all other public officials who tried to protect private property. Leftists have gone beyond justifying violence to glorifying in it.

The Camp of the Saints is playing out before our eyes. We are living the novel. It is impermissible to put down violent protests of "stigmatized and marginalized" black Americans. But who is more stigmatized than white people, written off as "Trump deplorables" and "racist white supremacists"? It is white people, not blacks who have to be careful in their language, to be careful about what parts of what cities they can safely enter. It is white people who are fired, sanctioned, evicted from social media for offending a black person, not the other way around. A white player for the professional soccer team, Los Angeles Galaxy, was let go not because of anything he did, but because his wife posted an Instagram of a black looter holding a shoe-box with the caption, "Black Nikes Matter."

It is perfectly acceptable to offend white people. All is permissible. The governor of Virginia has ordered the removal of a statue of Robert E. Lee from Richmond, the Virginia capital that Robert E. Lee honorably defended for three years from being looted and burned by Union invaders. Thanks to Lee, Richmond escaped Atlanta's fate, but Lee's statue is being taken down. It was racist of Lee to defend his state and the property and lives of those in Virginia. The truth of the matter is that it is not blacks that have been genocided, it is Southern people and their history.

The New York Times' 1619 Project is spreading this genocide of white history to all of North America. Northern cities are in flames, and Canada won't escape. Nor will Europe. The idiot Northern liberals who think they can use black anger against the despised American South are going to find themselves flayed with the same whip.

Related Topic(s): History; People; Police; Protest; South; Violence, Add Tags
Add to My Group(s)
Go To Commenting
The views expressed herein are the sole responsibility of the author and do not necessarily reflect those of this website or its editors.