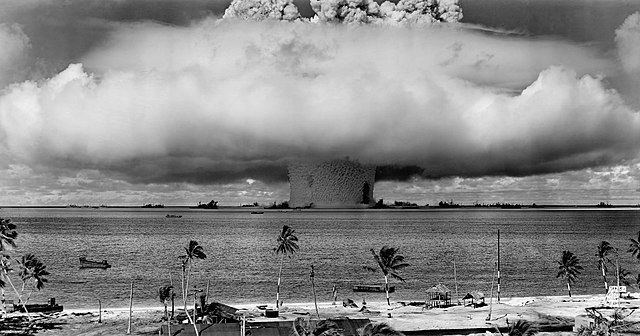 On November 15, US Senator Ed Markey (D-MA) and US Representative Ted Lieu (D-CA) introduced one of the shortest bills in the histories of their two parliamentary bodies. Shorn of the obligatory "be it enacted, blah, blah, blah" boilerplate, the bill's content comes to 14 words: "It is the policy of the United States to not use nuclear weapons first."

It's a short bill and it's a good bill, but it could be made both shorter and better by eliminating the word "first."

What America needs is a "no use of nukes, period" policy, followed quickly by an "elimination of the nuclear arsenal" policy.

In July, 122 United Nations member countries endorsed a treaty banning nuclear weapons altogether and providing for their elimination. The US abstained from the vote and won't be signing the treaty. I'm not sure why, since the treaty wouldn't really impose any new obligations and since unstated US doctrine is that only other countries, like Iran, should be expected to live up to their treaty obligations. The US is already formally committed to nuclear disarmament by virtue of its participation in the Nuclear Non-Proliferation Treaty. It's just never taken that obligation seriously.

Congress recently took up the question of whether or not President Donald Trump can be trusted with the authority to order a nuclear strike. His personal temperament alarms them. That temperament may or may not truly be more prickly than that of past presidents, but in the age of Twitter it's more openly alarming.

Unfortunately, Congress has ceded so much of its authority over foreign and military policy to the presidency since the end of World War Two -- the last time the US entered a war by congressional declaration, as required by its Constitution -- that trying to claw back just this one little bit of that authority is theater without substance.

Possession of the "nuclear football" is nine tenths of the law. To keep Donald Trump, or any other president, from using nuclear weapons wickedly (as if there were some other way to use them), Congress needs to get rid of the nukes, not just tinker with the legal authority to use them.

Nuclear weapons have no legitimate military use. They are weapons of terror, not of war. It's time that the first and only government to ever use them become the second (after South Africa) to voluntarily give them up, for its own sake and the world's.

Related Topic(s): Nuclear Disarmament; Nuclear Weapons, Add Tags
Add to My Group(s)
Go To Commenting
The views expressed herein are the sole responsibility of the author and do not necessarily reflect those of this website or its editors.