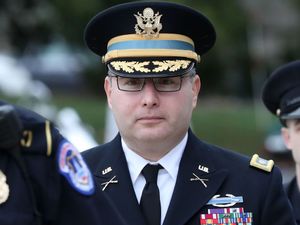 In a time of deceit, telling the truth is a revolutionary act.

National Security Council staff Lt. Col. Alexander Vindman lost his position and was escorted out of the White House for having the "temerity to object to Trump's 'perfect' phone call with Ukrainian President Volodymyr Zelensky and then committed the unforgivable sin of telling the truth about the matter when the House impeachment investigation sought his testimony," according to Benjamin Whittes' article, "The Crime of Doing the Right Thing" in the Atlantic.

Whitte continues, "The conduct for which his career has been attacked, what the president calls Vindman's "insubordination," was exceptionally brave truth-telling, both in real time and later when Congress sought to hear from him. When that happened, Vindman did not shrink from the obligation to say what had happened."

The timing could not be better, since nominations for the John F. Kennedy Profiles in Courage 2020 award are accepted through February 15. These awards are typically for living individuals, and the site says, "an emphasis will be placed on contemporary acts of political courage. "

Any citizen can make a nomination here.

This is a good time to send a message to truthtellers that we have their backs. Trump tried to make an example of Vindman by having him publicly humiliated with an escort out of the White House. Time to turn that little bit of karma back on the perpetrator. It would be great if the number of Vindman nominations was so huge that it made the news.

Related Topic(s): Lt Col Alexander Vindman; Profiles In Courage; Truth, Add Tags
Add to My Group(s)
Go To Commenting
The views expressed herein are the sole responsibility of the author and do not necessarily reflect those of this website or its editors.