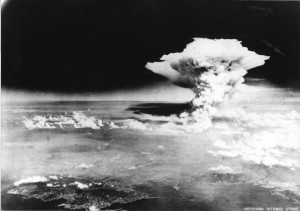 We now know that nuclear winter, ozone layer destruction, phytoplankton reduction and other effects of a nuclear exchange would massively impact health and life everywhere on Earth. How can we respond to something so overwhelming, so huge, so threatening that there is nowhere to hide except in denial? We've been trying that for almost 70 years. The numbers of weapons are down, their accuracy and lethality are up. It is time to try something new.

After the disaster of Fukushima, several nations, including Germany, abandoned nuclear generation because of its dangers. But 13 nations are now constructing new power reactors. The problem is that the refinement of nuclear reactor fuel, if carried further, becomes weapons grade highly enriched uranium. The operation of nuclear plants results in the byproduct of plutonium, which also can be used to make a bomb.

Since 9/11/01 the United States has been following a policy of expanding its influence through military bases around the world, particularly in Central Asia, Africa and the Pacific. This process is greatly aided by the presence of our vast stockpile of nuclear warheads and far-reaching delivery systems, a fearful "deterrent" to any potential resistance.

At the same time, the manufacture and maintenance of nuclear warheads and the missiles, planes and submarines to deliver them anywhere in the world has grown into a huge business. In excess of $50 billion a year, this business -- including Air Force bases, nuclear laboratories, manufacturing plants and other facilities -- employs people in almost every Congressional District, though far more Americans could be employed rebuilding infrastructure, teaching, or providing health care if an equivalent sum were spent creating those jobs.

The corporations that manufacture and manage these facilities spend millions a year in campaign contributions and lobbyists persuading our representatives in Congress not to cut the budget from any part of this huge "defense" conglomerate.

For other nations of the Nuclear Nine, the possession of nuclear weapons supplements their limited conventional forces when compared to those of a potential enemy. They will resist relinquishing their nuclear weapons, unless there is a reduction in all military forces. But it can be managed.

In 1996 the International Court of Justice considered nuclear weapons and concluded that their use was illegal, except as the last resort of an endangered nation. We now know that any use of these weapons threatens life on Earth. It would be useful if the nuclear weapons-free states could persuade the Court to label the manufacture, maintenance, support and any and all preparations for the use of nuclear weapons to be criminal activities.

It seems obvious that any activity that threatens the indiscriminate incineration or poisoning of human beings is a crime against humanity. For the millions involved in this work, or profiting from it, it is high time that they face the criminal nature of their employment, management, study or investment. This potential suicide of the human race cannot be disguised as a military deterrent, a patriotic duty or an acceptable activity for any reason. It is a crime beyond all measure. It must be stopped!

There is now a draft convention for the abolition of nuclear weapons at the United Nations, similar to those that ended chemical and germ warfare. As the step-by-step disarmament process has resulted in the current "modernization" of existing weapons, it is time to take another approach. The more than 180 nuclear weapons-free nations should move to finalize this convention with or without the nuclear weapons states' participation.

In the final analysis, if the nuclear nations continue to resist abolition, they may be subject to sanctions of the nuclear weapons-free states.

There is no time to hesitate on the abolition of these weapons. As more nations get nuclear plants, refined uranium fuel and basic technology, the Non-Proliferation Treaty will lose its force and the number of nations having nuclear weapons will increase.

The choice is clear. Either we exert ourselves to achieve and enforce a Convention to Abolish Nuclear Weapons, or we leave to our children the awful possibility that they will be poisoned by fallout or incinerated by these criminal weapons.

*Peter G. Cohen, writing for PeaceVoice, was a freshman at the U Chicago when Fermi developed the chain reaction, was on a troopship bound for Japan when the bomb was detonated over Hiroshima, and is the author of the website http://www.nukefreeworld.com

Consortiumnews.com was founded by Robert Parry in 1995 as the first investigative news magazine on the Internet. The site was meant to be -- and has become -- a home for important, well-reported stories and a challenge to the inept but dominant (more...)
Related Topic(s): Doomsday Devise; Fukushima; Hiroshima; International; Uranium, Add Tags
Add to My Group(s)
Go To Commenting
The views expressed herein are the sole responsibility of the author and do not necessarily reflect those of this website or its editors.