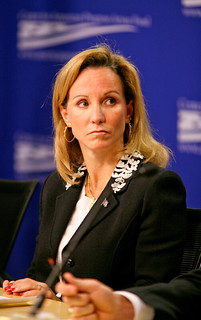 The US military media industrial complex is corrupting our airwaves.

As the debate over ISIS and US actions against that terrorist group continues, we're seeing more and more so-called "policy experts" appearing on the mainstream media, explaining why American military action against ISIS is our only choice.

Well, as it turns out, these "policy experts" who are so quick to pitch war and military conflict are often really just shills for our nation's military industrial complex, and they're being paid very handsomely for all of their fear-mongering.

Lee Fang over at The Nation has revealed the truth about just a couple of the many, many "policy experts" that have been flooding our airwaves in recent weeks.

Keane is the head of the Institute for the Study of War (ISW), which also employs Liz Cheney and neoconservative firebrand Bill Kristol. The ISW itself is backed by a handful of the United States' largest and most profitable defense contractors.

Keane's views and opinions on the current ISIS crisis have appeared in a variety of news outlets, including The New York Times and the BBC.

But as Lee Fang points out, when Keane isn't being interviewed by the mainstream media, he's a very busy man.

Keane is a special adviser to the military contractor Academi (formerly Blackwater), a board member for tank and airplane maker General Dynamics, and a "venture partner" with an investment firm that partners with various defense contractors.

For his work with General Dynamics alone, Keane has been paid a six-figure salary every year since 2004, and last year, he made over $250,000.

So, is it really any surprise that someone who's being paid so handsomely by some of the nation's biggest defense contractors is going on TV and pitching more war and military conflict?

Then there's CNN regular Frances Townsend, a former Bush administration official, who has repeatedly called for more military action against ISIS during her television appearances.

Well, like retired General Keane, Ms. Townsend has multiple connections to defense contractors and the US military industrial complex.

Related Topic(s): Accountability; Disclose; Generals; Military; Pundits, Add Tags
Add to My Group(s)
Go To Commenting
The views expressed herein are the sole responsibility of the author and do not necessarily reflect those of this website or its editors.