The United States hasn't just become a powder keg for social unrest because of the widening of wealth inequality and the crash of the economy, which have been leading to revolts that defy the police state and give the lower classes more power. With the country's neoliberal deterioration has also come the rise of reactionary sentiments and movements, ones which seek to make history's next chapter not one of socialism and equality but one of fascism and war.

This ominous development has been in progress for decades with the rise of patriot militias, the presence of right-wing terrorists like Timothy McVeigh, and more recently the rebranding of the neo-Nazi movement into the "alt-right." What's the ultimate goal of the people at the forefront of these radical reactionary strains? It varies among the different ideological sects, but a picture of their general vision can be gleaned from examining the sects among them that have become the most relevant. 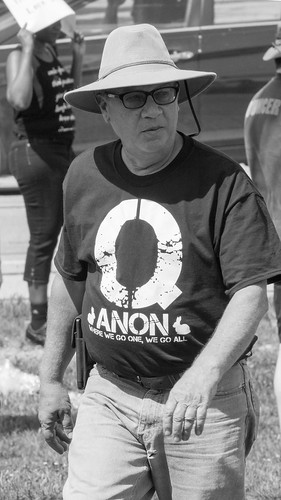 QAnon: a conspiracy theory whose followers want to carry out a violent coup

A recent survey revealed that one in ten Americans now identify as supporters of QAnon, the 4Chan figure who claims that Trump is battling to take down "Satanic" pedophiles within Washington's elite circles. The survey also showed that those who share this belief in Q's stories are three times more likely than the general population to think violence should used to in order to defend what one believes in. But I'm getting ahead of myself.

To understand the depth of the pathology that QAnon has created among its believers, we should assess what its end goal is: a grand apocalyptic event, called "The Storm," where the righteous will be vindicated and the evildoers will be eliminated. In other words, a repackaged version of the Christian doomsday belief that's always driven the American religious right. It's fitting that just as QAnon persuades its followers to support Trump blindly, even consciously accepting outright misinformation and countless false predictions in the process, the Biblical end times prophecy has long persuaded evangelicals to be loyal to the world's reactionary powers. Especially Israel, which is supported by many of these evangelicals paradoxically because they think a catastrophic battle will need to be fought within Israel in order for the world to be reborn.

Amid the introduction of QAnon, this obsession with shaping world affairs based off of a desire to kickstart divine destruction has become tailored for Trump's America. Tailored in a way that's been able to propagandize millions of people into seeing Trump as a kind of American end times Jesus Christ, one who's waiting to purge the country of corruption. It's not hard to jump to some alarming thoughts while examining what Q followers believe; their worldview is a carbon copy of the white supremacist mythology about how the U.S. is controlled by a cabal of Jews whose Zionist Occupied Government (ZOG) can only be defeated through violent insurrection.

Looking at this Q post from three years ago, it indeed becomes very apparent that Q's followers are expecting a vast campaign of violence in order for the evils within the country to be vanquished:

My fellow Americans, over the course of the next several days you will undoubtedly realize that we are taking back our great country (the land of the free) from the evil tyrants that wish to do us harm and destroy the last remaining refuge of shining light. On POTUS' order, we have initiated certain fail-safes that shall safeguard the public from the primary fallout"On POTUS' order, a state of temporary military control will be actioned and special ops carried out"However, the atmosphere within the country will unfortunately be divided as so many have fallen for the corrupt and evil narrative that has long been broadcast. We will be initiating the Emergency Broadcast System (EMS) during this time in an effort to provide a direct message (avoiding the fake news) to all citizens. Organizations and/or people that wish to do us harm during this time will be met with swift fury"--"-certain laws have been pre-lifted to provide our great military the necessary authority to handle and conduct these operations (at home and abroad).

A state of military control? Messaging that's forced by the government onto the masses? A lifting of basic civil liberties? Brutal suppression of those who oppose the regime? If these ideas don't make you feel uneasy, you must already be down the Q rabbit hole, where anything can be rationalized as long as it serves the end goal.

Falun Gong: a cult that believes Trump is fulfilling an end times prophecy where communism will be destroyed

What's important to understand about these reactionary conspiracy theories is that they aren't emerging from random 4Chan trolls or clickbait pseudo-news sites in Macedonia. They're being amplified by, and in many cases directly produced within, the propaganda centers of the state's intelligence agencies. As WikiLeaks hasassessed, QAnon is very likely a "pied piper" operation by U.S. intelligence, making it no coincidence that former U.S. director of National Intelligence Richard Grenell recently retweeted one of the largest QAnon accounts. It's also no coincidence that Q's explosive rise throughout 2020 has largely been the result of law enforcement members throughout the country coming to believe in the conspiracy.

The same dynamic of CIA-created disinformation being promoted by the centers of power is behind this year's rise of anti-Chinese paranoia. And like is the case for Q, the anti-Chinese propaganda is tied in with a religious ideology that anticipates an apocalyptic confrontation.

Falun Gong, which is behind the increasingly prominent pro-Trump news outlet The Epoch Times, is a China-centered religious group which believes that "Trump was sent by heaven to destroy the Communist Party." Last year the China Tribunal, one of Falun Gong's front groups, published a "report" whichbaselessly claimed that China has been systematically stealing organs from the members of Falun Gong.

The alarming thing about lies like these is that since they serve to advance the U.S. cold war against China, they're regularly promoted and portrayed as serious by all of the mainstream American news outlets. Even this year's absurdly misleading claims from The Epoch Times about how China "covered up" Covid-19 have been amplified by a media landscape that's eager to scapegoat China and communism in general. Like has also been the case for Q, the Trump White House has worked to leverage the lies of Falun Gong in its favor; as soon as Covid-19 began wreaking havoc upon the U.S., Trump started enacting a propaganda program to blame China for the crisis, persuading all of Trump's allies in the right-wing media to parrot the new series of anti-Chinese talking points.

The goal of the Washington imperialists who propagate these narratives is to economically and geopolitically subdue China. The goals of these religious fanatics at the forefront of the anti-Chinese propaganda war go even further; they're the Q followers of the American Sinophobic crowd, complete with their own end times prophecies. As Helen Farley wrote in the 2014 paper Falun Gong: a narrative of pending apocalypse, shape-shifting aliens and relentless persecution:

Related Topic(s): America; Election; Far-right; Media; Military; Propaganda, Add Tags
Add to My Group(s)
Go To Commenting
The views expressed herein are the sole responsibility of the author and do not necessarily reflect those of this website or its editors.