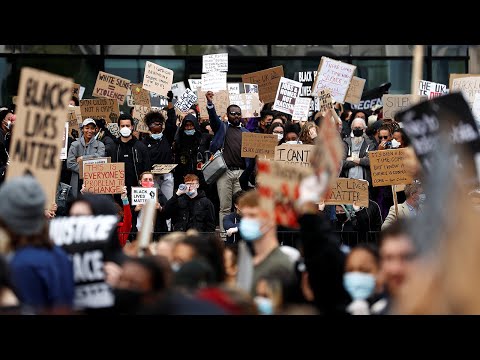 You could feel the Zeitgeist shifting these past days, as culturally powerful parts of our society decided that the future lies with the protesters demanding accountability for America's past and safety from its present authorities. Top brass at the Pentagon apologized for taking part in Trump's Bible-hoisting photo op. The N.F.L. commissioner, Roger Goodell, took to the Internet to say, "We, the National Football League, condemn racism and the systematic oppression of black people." And Nascar -- long the perfect marriage of corporate branding and unrepentant good-ol'-boyism -- banned the Confederate flag at its races and events. Not only that, but Richard Petty -- the winningest driver in stock-racing history and now a team owner, who said, in 2017, that he'd fire any driver who protested the National Anthem -- let the African-American driver Bubba Wallace repaint his car with Black Lives Matter emblems, for last week's race in Martinsville, Virginia. Those actions stem, of course, from the success of organizers in making the Black Lives Matter message resound -- polling shows that, in the course of a few weeks, support for the movement spiked by almost 20 percentage points.

Public opinion doesn't usually move in staccato bursts like that. If you look, say, at polling data about support for interracial marriages, it rises from four percent around the year I was born, in 1960, to about 90 percent now -- it's such a slow and steady curve that you'd almost guess it reflected the death of old people more than of old opinions. Culture usually shifts gradually -- painfully gradually for those of us who want change. But, occasionally, attitudes swing quite suddenly, as if pressure had been silently building up behind a dam until it burst. That silently building pressure usually takes the form of good organizing (in this case, superb work by the current generation of civil-rights activists), and the breach itself usually comes from events. The video of George Floyd's death was so stark that it summed up, in an iconic way no witness could avoid understanding, so much of the country's racial history.

Often, great organizing -- say, by labor unions seeking a new contract -- is for immediate and tangible actions, and the side with more muscle and unity generally prevails. The goal of other types of organizing is precisely to shift the Zeitgeist, the prevailing sense of what's normal and natural and obvious. When that happens, more fundamental change (reexamining the role of police in our society, for instance) can suddenly be on the table. There's no guarantee that the right things will happen, and the pressure must be unrelenting, but what was impossible weeks ago now seems, at the least, plausible. In the climate crisis, each fight against a pipeline or a frack well, against an oil company or a bank that backs it, is important in its own right. But each also serves as a way to build the pressure that will, eventually, move us psychologically from a world that sees the fossil-fueled economy stretching out into the future to one that understands we need to change.

There are signs that we're reaching that paradigm shift, both because of powerful organizing (eight million people in the streets last fall for global climate strikes) and because environmental events, such as the wildfires in California and Australia, demonstrate our scary reality more plainly all the time. Around the world, more and more cities and countries are rolling out economic-recovery plans that emphasize climate action, as if that was the most obvious idea. (It is.) Even in this country, you can see it in the polling: a string of recent surveys shows that the issue of global warming is Trump's single greatest vulnerability. And you can sense it in significant corners of the culture, too -- corners that pay a lot of attention to marketing and branding and predicting the future. Lyft's announcement on Wednesday that all of the cars used in its network will be electric by 2030 will not solve the climate crisis. (Indeed, if it draws people away from the subway, it could make it worse; what we really need are electric buses and electric bikes.) But it's a sign -- like Wallace's car circling the Nascar track -- that, after years and years of organizing, a new logic is beginning to drive events.

The actress Jane Fonda has devoted much of the past year to climate organizing, convening a weekly series of civil-disobedience actions that she calls Fire Drill Fridays. They stretched through the winter in Washington, D.C., and when she went back to California, to film the next season of "Grace and Frankie," the activism relocated with her. She describes the events in her forthcoming book, "What Can I Do?: My Path from Climate Despair to Action."

You've been an activist most of your life. Does the energy around climate justice and racial justice remind you of the nineteen-sixties, or is it different?

It feels different now. The protests are far more diverse. There are all-white communities in Southern California, for instance, where many hundreds of white people have been marching carrying Black Lives Matter signs. No one expected that. Many factors are at play -- the work that's been done by Black Lives Matter, (Showing Up for Racial Justice), and White People 4 Black Lives are some examples. The election of Trump forced many whites to recognize the degree to which white supremacy was still very much alive in this country. This was no surprise to black people, but so many whites felt that Obama's Presidency signaled the beginning of the end of that malignancy. The murder of George Floyd was so visible, so intentional, that it woke a lot of people ... the last straw after Breonna Taylor was shot in her bed, and Ahmaud Arbery was shot while jogging. Many white people were brutalized by the police in the ensuing protests, getting a taste of what blacks have endured for too long. I think the young climate strikers who took to the streets by the millions around the world last fall really had an impact on people's awareness of the gravity of the climate crisis, but also they made protesting and civil disobedience O.K., and showed it was effective. I think this helped make it O.K. for people to fill the streets against police brutality now. Frankly, climate and racial injustice don't seem like two separate causes anymore.

What are the clearest memories in your mind from this year of Fire Drill Fridays?

There were many, but I remember November 1st, the fourth Fire Drill Friday. As we gathered to prepare for that rally, it hit me so clearly: this is working! People are travelling from all over the country to join this growing community, because that's what it was becoming, and put their bodies on the line. A large percentage of them had never engaged in civil disobedience before, and, from what I saw and what they told me, it was transformative for them. Annie Leonard, the executive director of Greenpeace U.S.A., and I were aiming to rouse people who were new to civil disobedience, and that's what was happening, and this must become the new normal.

Another clear memory is December 20th. We were marching to the Hart Senate Building, to do a sit-in. I looked around, and there was the Reverend William Barber II, Ai-jen Poo, Gloria Steinem, Dolores Huerta, and Heather McTeer Toney, all of us marching together, all those leaders of major movements coming together for climate. That felt new.

Some activists say that they can't be bothered voting this year, because Joe Biden is "just another old-school Dem." You've gone through many elections -- does 2020 feel crucial to you?

Bill McKibben is the author of a dozen books, including The End of Nature and Deep Economy: The Wealth of Communities and the Durable Future. A former staff writer for The New Yorker, he writes regularly for Harper's, The Atlantic Monthly, and The (more...)
Related Topic(s): Accountability; Climate; Ecosystems; Protest; Public Health; Public Opinion; Weather; Zeitgeist, Add Tags
Add to My Group(s)
Go To Commenting
The views expressed herein are the sole responsibility of the author and do not necessarily reflect those of this website or its editors.