Snyder's new book asserts that we forget the past at our own peril (and that the robots are winning). 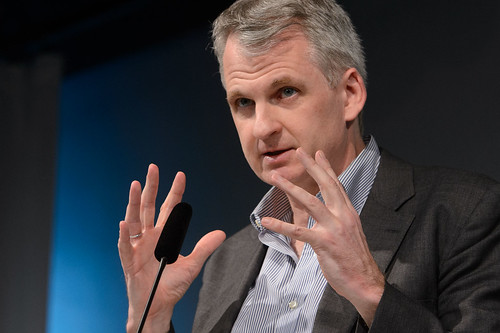 After the 2016 election, Timothy Snyder, a Yale historian specializing in totalitarian regimes in eastern Europe, wrote a heralded pamphlet titled On Tyranny: Twenty Lessons from the Twentieth Century. Snyder warned what a Trump presidency could bring and suggested how to resist authoritarians. His latest book, The Road to Unfreedom: Russia, Europe and America, describes how propaganda is being deployed by authoritarians in the U.S. and abroad with anti-democratic results. AlterNet's Steven Rosenfeld talked with Snyder about how vast slices of society in the U.S. and Europe have been left feeling powerless, and as they turn to social media and the internet, they are easily targeted by provocateurs. This dystopian landscape is today's political stage.

Steven Rosenfeld: In your book, you talk about how politics in the United States, in Europe and Russia are bouncing between these poles of what you call the politics of inevitability and the politics of eternity. In both cases, the role of citizens is shrinking. What is this landscape you see unfolding now?

By the politics of inevitability, what I mean are ideas of automatic progress where we don't think they're really alternatives [remaining] in history. We think capitalism is going to create democracy and there aren't really any alternatives, and history's basically over. A lot of us have been living with that spirit, unfortunately, in the last 25 years and we've educated a whole generation I'm afraid, largely in that spirit.

SR: The problem with that is...

TS: The problem with that, as you say, is that if you think you know the rules of history, if you think everything is at least in broad strokes foreordained, then you don't really have to take responsibility for any particular part of what's going on. More than that, you don't have to remember what happened in the real past because those alternatives are dead. You think those things can't possibly come back. Then when that goes wrong... All I'm trying to do with these ideas of inevitability and eternity, is I'm trying to give us some broader way of thinking, or some more stable place of standing when we think about where we are.

SR: That takes us to what you call the politics of eternity.

TS: What happens when inevitability goes wrong is that people then slip into something that I call the politics of eternity. Let's say inevitability leads to economic inequality, which it does. Let's say people stop seeing that there is a future, which they do. In many parts of the U.S. that's already happened. It's been happening since 2008; it's been happening for a decade now. That means that people have been vulnerable to another idea, which says, 'Well, all the good stuff was in the past and the reason why things aren't good anymore is other people. It's the immigrants. It's blacks. It's Muslims. It's the outsiders.'

That style of thinking takes the future away entirely and just gets people trapped in these notions like "America First," or "Making America Great Again," where you just kind of go around in a cycle and it's not all clear that the government's promising you anything better. It's just promising to remind you that things should be better for you, but maybe not for other people. Then you get caught in the drumbeat of the daily news cycle, and the daily propaganda, which reminds you that you deserve something and other people don't deserve something.

SR: And that takes us to the present.

TS: In a broad way, I think what's happening in the U.S., and not just in the U.S., is we're kind of shifting from one thing to the other thing; of expecting a future where things were automatically going to get better according to certain rules, to then shifting to a situation where we're all kind of spinning around. Whether we're on the right or the left now, we don't really expect the government to be doing anything. We just expect it to give us our daily injection of feeling righteous, or feeling outraged.

SR: Right, and what you have done in not just this book, but in a lot of your writing, is talk about how we've seen versions of this before. It's not as if history repeats itself exactly, but there are dynamics that recur. If I correctly read the book, we're sort of at that tipping point now. Maybe we have been for a while. How would you put it?

Steven Rosenfeld  covers democracy issues for AlterNet. He is a longtime print and broadcast journalist and has reported for National Public Radio, Monitor Radio, Marketplace,  TomPaine.com  and many newspapers. (more...)
Related Topic(s): Computers; Democracy; Facebook; Misinformation; Online; Propaganda And Political Myths; Robots, Add Tags
Add to My Group(s)
Go To Commenting
The views expressed herein are the sole responsibility of the author and do not necessarily reflect those of this website or its editors.