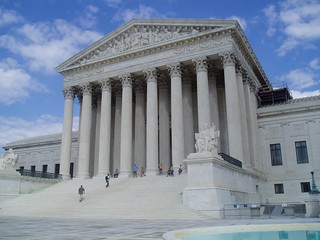 Supreme Court
(Image by ThatMattWade)   Details   DMCA
The Republicans are getting away with their disgraceful strategy of blocking the whole constitutional process for filling a Supreme Court vacancy. All signs show that although roughly two-thirds of voters do not think this stonewalling is right, the issue is simply disappearing from view and thus is falling off the radar as an electoral factor.

Something should be done, and it can.

First, that there is a real chance that Donald Trump could be elected president. The political futures market says it's about a 40% chance, which is far from nothing. And, while I believe the chances are lower than that, I also believe in the general finding that such markets are more accurate than the opinion of individuals. So, there is a genuine possibility that -- unless something is done to break the present impasse -- the Republicans could reap huge benefits from their scandalous conduct. Abuse of the Constitution should never be rewarded.

My second premise is that President Obama's nominee - Merrick Garland - is quite acceptable as a Supreme Court justice. I know many on the left believe otherwise, but I think they are missing the essential reality in the situation. By that I mean that there is good reason to feel confident that Garland's vote on the Court would be in line with the votes of the two justices appointed in the 90s by President Clinton and the two justices appointed by President Obama. To put it another way, I believe it would be a rare case in which the vote of a "centrist" Justice Garland would be different from that of a more solidly "progressive" justice.

Getting Garland onto the Court, in other words, would do the essential job -- in purely political terms -- of obtaining the first liberal-majority Court in over 40 years.

So even if the hopes of Hillary Clinton winning the presidency and the Democrats taking control of the Senate are fulfilled, that would not lead to a meaningfully better result for filling this vacancy.

Fortunately, there's something that can be done.

I propose that the president proceed with a modified version of an idea that was floated over a month ago, by an attorney named Gregory L. Diskant, in a Washington Post op/ed. The president can use this idea to bring in the judicial branch to break the impasse between the executive and legislative branches.

Diskant's essential idea is that the president can declare that the Senate, "having been given a reasonable opportunity to provide advice and consent to the president with respect to the nomination of Garland, and having failed to do so, can fairly be deemed to have waived its right." (Emphasis added)

And with the Senate having "waived its right," the President - who the Constitution says "shall appoint" - can just proceed to make the appointment on his own.

When that op/ed by Diskant came out, I wrote favorably about it.

Developments since then lead me to wish now to make slight modifications in the approach Diskant laid out. Over the past month, it has become ever clearer that the Democrats are failing to punish the Republicans effectively for their shameful power grab.

" The President has shown himself again incapable of inspiring moral outrage in the American people. Or rather, he doesn't really even try.

" With nothing happening, a journalists like Slate.com's legal expert, Dahlia Lithwick, is expressing frustration about their inability to find ways of calling voters' attention to the issue.

Andy Schmookler, an award-winning author, political commentator, radio talk-show host, and teacher, was the Democratic nominee for Congress from Virginia's 6th District. His new book -- written to have an impact on the central political battle of our time -- is
Related Topic(s): Judge Merrick Garland; Obstructionism; President Barack Obama POTUS; Public Opinion; Senate Republicans; Supreme Court SCOTUS, Add Tags
Add to My Group(s)
Go To Commenting
The views expressed herein are the sole responsibility of the author and do not necessarily reflect those of this website or its editors.