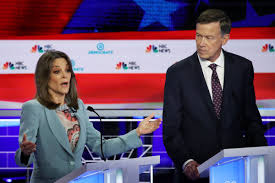 So, we all watched Thursday's debate in which Marianne Williamson finally participated and showed the country who she is. And she was magnificent. She demonstrated what her spiritual guidebook, A Course in Miracles calls a refusal to be insane. She embodied that still small voice of conscience the voice for God that today's liturgy of the word distinguishes from the world's madness.

To begin with consider the madness we witnessed Thursday night. It was a perfect reflection of our insane country, of our insane world, of our insane electoral system. There they were: ten of our presumably best and brightest aspiring to occupy what we're told is the most powerful office in the world. They shouted, talked over their opponents, self-promoted, bragged, and put their opponents down. They offered complicated "plans" that no one (including themselves) seemed to understand. They ignored the rules of the game, recited canned talking points, and generally made fools of themselves and of viewers vainly seeking sincerity, genuine leadership and real answers. Except for that brief exchange about busing between Kamala Harris and Joe Biden, it was mostly embarrassing.

And then there were the so-called moderators who allowed the circus to spin so completely out of control. They issued stern warnings about time limits, frequently set them strictly at "thirty seconds," but then proceeded to allow speakers to go on for three minutes or more. The celebrity hosts were completely arbitrary in addressing their questions unevenly. They repeatedly questioned some of the candidates and ignored others.

Meanwhile, there was Marianne Williamson off in the corner almost completely out of sight and generally ignored by the hosts. When they finally deigned to notice her polite attempts to contribute, no one seemed to know what to do with her comments. There was never any follow-up or request for clarification. Instead, what she said seemed completely drowned out by the evening's "excitement," noise, general chaos, and imperative to change topics. It was as if she were speaking a foreign language. I mean, how do you respond to that "still small voice of conscience" that says:

As expected, the pundits who afterwards declared "winners" and "losers," generally put Marianne in the latter category. Their criteria for that judgment were just what you'd expect: Who was louder? Who was more aggressive, more interruptive? Who spoke for more minutes? Who more effectively transgressed the debate "rules" and thereby showed leadership and dominance?

None of this could be further from the spiritual principles Marianne Williamson has espoused for the last 40 years. That spirituality, like Elijah's, Elisha's, Paul's, and Jesus' in today's liturgical readings holds that the problems that plague our world have simple answers that have nothing to do with bombast, filibusters, or spectacle. However, the world rejects out of hand the solutions of that still-small-voice of conscience as unrealistic and "out there" in the realm of the irrelevant and impractical. Such blind dismissal is what Paul in today's reading calls "flesh;" it's what Jesus elsewhere rejects as "worldly."

So, in an effort to put Thursday's debate in perspective, let me begin by describing where Marianne is coming from; then I'll get to the relevant readings.

A Course in Miracles

For more than forty years, the foundation of Marianne Williamson's life and teachings has been A Course in Miracles (ACIM). It's a three-volume work (a text, 365 daily exercises, and a manual for teachers) that was allegedly (and reluctantly) channeled by Helen Schucman, a Columbia University psychologist and atheist in the three or four years leading up to 1975, the year of the trilogy's publication. It has since sold millions of copies. Williamson has described ACIM as "basic Christian mysticism."

Even tougher than the cryptic text itself is putting into practice the spiritual exercises in Volume II whose entire point is "a complete reversal of thought." According to ACIM's constant reminders, we are all prisoners in a cell like Plato's Cave, where everything the world tells us is exactly the opposite of God's truth.

To counter such deception, A Course in Miracles has the rare disciple(possessing the discipline to persevere) systematically deconstruct her world. It begins by identifying normal objects like a lamp or desk and helping the student realize that what s/he takes for granted is entirely questionable. Or as Lesson One puts it: "Nothing I see in this room [on this street, from this window, in this place] means anything." The point is to liberate the ACIM practitioner from all preconceptions and from the illusory dreams the world foists upon us from birth. Those illusions, dreams and nightmares are guided by fear, which, the course teaches, is the opposite of love. In fact, ACIM teaches that fear and love are the only two energetic forces in the entire universe. "Miracles" for A Course in Miracles are changes in perception a paradigm shift from fear to love. For Marianne, Donald Trump's worldview is based primarily on fear; her's is based on love (which means action based on the recognition of creation's unity).

According to Williamson's guide, time, space, and separation of humans into separate entities are all entirely illusory. Such distinctions are dreams that cause all the world's nightmares, including all the topics addressed in Thursday's debate. For instance:

With such clarifications in mind, the solution to the world's problems are readily available and far easier to understand than complicated health care systems or carbon trading. The solutions are forgiveness and atonement. But for ACIM, forgiveness does not mean overlooking another's sins and generously choosing not to punish them. It means first of all realizing that sin itself is an illusion. It is an archery term for a human mistake for missing the mark something every one of us does.

Related Topic(s): Democrats; Forgiveness; God; Immigrants; Jesus; Love; Marianne Williamson; Reparation; Spiritual; Truth, Add Tags
Add to My Group(s)
Go To Commenting
The views expressed herein are the sole responsibility of the author and do not necessarily reflect those of this website or its editors.