Israel is forcing Palestinian schools in occupied East Jerusalem to switch over to an Israeli-controlled curriculum. 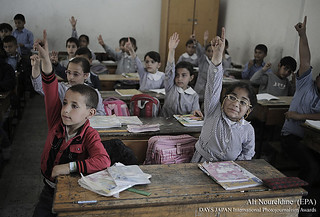 Jerusalem -- Israel is to put financial pressure on Palestinian schools in occupied East Jerusalem in an effort to make them switch over to an Israeli-controlled curriculum, according to local activists and officials.

Almost all of East Jerusalem's schools currently use a syllabus developed by the Palestinian Authority, a Palestinian government-in-waiting created in the mid-1990s by the Oslo accords. Before that, they relied on the Jordanian curriculum.

Palestinian officials have slammed the move, warning that it is part of intensified efforts by Israel to disconnect East Jerusalem from the neighboring West Bank and entrench its control over the 300,000 Palestinians in the city.

Peace efforts have long been premised on Israel ending its occupation of East Jerusalem and recognizing the city as the capital of a future Palestinian state.

"This attack on our curriculum is part of Israel's war on Palestinian identity," Sabri Saidam, the Palestinian education minister, told Al Jazeera. "Israel is working to consolidate its illegal occupation."

Israel tried to impose the Israeli curriculum when it first occupied East Jerusalem in 1967, but was forced to relent after parents and pupils staged months of strikes and protests.

Civil rights groups, meanwhile, fear Palestinian schools will have little choice but to submit to the Israeli scheme if they do not want to face further budget cuts in an East Jerusalem education system already chronically underfunded by Israel.

Palestinian pupils, local activists say, will be presented with a curriculum that denies their history and identity, and places a strong emphasis on Israel's official position that all of Jerusalem is its "eternal, unified capital."

"We don't want our children to be told that al-Aqsa is not our holy place, that the Palestinian flag is not our flag, that the land belongs to the settlers, and that Ariel Sharon is a hero," said Hatem Khweis, a spokesman for the Union of Parents' Committees, a Palestinian group campaigning for improved education in East Jerusalem.

Israel operates an almost entirely segregated education system between Jewish and Palestinian pupils, both in Israel and in occupied East Jerusalem.

Saidam said that Israel was required under international treaties it had signed to provide a public education that respected the occupied population's heritage, identity and culture.

Israel's education minister, Naftali Bennett, who is also leader of the settler party Jewish Home, said he wanted to "provide a strong tailwind to any school that chooses the Israeli curriculum. My policy is clear: I want to aid the process of Israelization."

Related Topic(s): Education; Israel; Palestinian; Schools; Textbook; Zionists, Add Tags
Add to My Group(s)
Go To Commenting
The views expressed herein are the sole responsibility of the author and do not necessarily reflect those of this website or its editors.