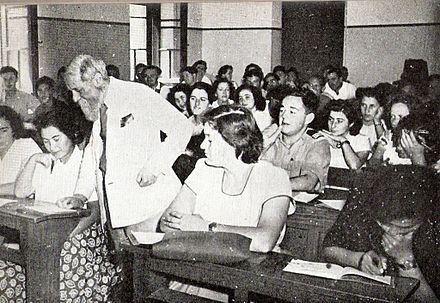 But what does it mean to love God with all your heart? I am writing to call attention to Martin Buber's interpretation of the Talmudic doctrine of the two urges in his short book Good and Evil: Two Interpretations: I. Right and Wrong; II. Images of Good and Evil, translated by Ronald Gregor Smith and Michael Bullock (New York: Charles Scribner's Sons, 1953), in which he routinely uses generic masculine terminology that was commonly used in the 1950s:

"In the creation of man, the two urges [i.e., a 'good' and an 'evil' urge] are set in opposition to each other. The Creator gives them to man as his two servants which, however, can only accomplish their service in genuine collaboration. The 'evil urge' is no less necessary than its companion, indeed even more necessary than it, for without it man would woo no woman and beget no children, build no house and engage in no economic activity, for it is true that 'all travail and all skill in work is rivalry of a man with his neighbor' (Ecclesiastes 4:4). Hence this ['evil'] urge is called 'the yeast in the dough,' the ferment placed in the soul by God, without which the human dough does not rise. Thus, a man's status is necessarily bound up with the volume of 'yeast' within him: 'whoever is greater than another, his urge is greater that the other's.' The high value of the 'evil urge' finds its strongest expression in an interpretation of the scriptural verse (Genesis 1:31) which asserts that God, on the evening of the day on which he had created man, looked upon all he had made and found it 'very good': this 'very good' applies to the evil urge, whereas the good one only earns the predicate 'good'; of the two, it is the evil urge which is fundamental. But that it is called the evil urge derives from man's having made it so. Thus Kain (as is said in the Midrash) might indeed respond to the God who was calling him to account that it was He, God, Himself who had implanted in him the evil urge; but the rejoinder would be untrue, since only through him, man, did it become evil. It became so, and continually becomes so, because man separates it from its companion and in this condition of independence makes an idol of precisely that which was intended to serve him. Man's task, therefore, is not to extirpate the evil urge, but to reunite it with the good. David, who did not dare to stand up to it and therefore 'slew' it in himself as it runs in one of his Psalms (100:22): 'My heart is pierced through within me' did not fulfil it, but Abraham, whose whole heart was found faithful before God, who now made a covenant with him (Nehemiah 9:8), did. Man is bidden (Deuteronomy 6:5): 'Love the Lord with all thine heart,' and that means, with thy two united urges. The evil urge must also be included in the love of God thus and thus only does it become perfect, and thus and thus only does man become once more as he was created: 'very good.' To achieve this, however, man must begin by harnessing both urges together in the service of God. As when a peasant possesses two oxen, one that has always ploughed and one that has not yet ploughed, and now a new field is to be cultivated: he brings both of them together beneath the yoke. But how is the evil urge to be prevailed upon to permit this to happen to it? Why, it is nothing but a crude ore, which must be placed in the fire in order to be moulded: so let it be totally immersed in the great fire of the Tora [sic]. And that also man cannot do of his own strength; we must pray to God to aid us to do His will with all our hearts. Therefore, the Psalmist beseeches (86:11): 'Unite my heart to fear thy name'; for fear is the gateway to love.

"This important doctrine cannot be understood as long as good and evil are conceived, as they usually are, as two diametrically opposite forces or directions. Its meaning [i.e. the meaning of this important doctrine] is not revealed to us until we recognize them [i.e., the two urges] as similar in nature, the evil 'urge' as passion, that is, the power peculiar to man, without which he can neither beget nor bring forth, but which, left to itself, remains without direction and leads astray, and the 'good urge' as pure direction, in other words as an unconditional direction, that towards God. To unite the two urges implies: to equip the absolute potency of passion with the one direction that renders it capable of great love and of great service. Thus, and not otherwise, can man become whole" (pages 94-97).

Related Topic(s): Evil; God; Love; SOUL; Wholeness, Add Tags
Add to My Group(s)
Go To Commenting
The views expressed herein are the sole responsibility of the author and do not necessarily reflect those of this website or its editors.