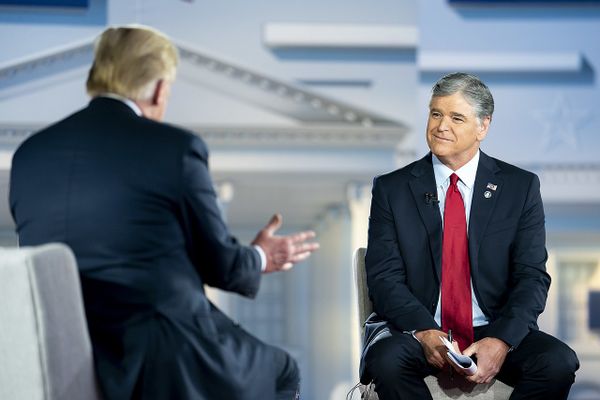 "Our liberty depends on the freedom of the press, and that cannot be limited without being lost."
Thomas Jefferson in 1786, to his close friend Dr. James Currie

In 1983, 90% of the American media landscape (including magazines, books, music, news feeds, newspapers, movies, radio, and television) was dominated by 50 conglomerates.

Just 36 years later in 2019, a mere five conglomerates dominated 90% of the media that Americans consume (Time Warner, Disney, Murdoch's News Corporation, Bertelsmann of Germany, and Viacom). Looking at terrestrial radio in particular, the radio network that airs Rush Limbaugh and Sean Hannity -- iHeartMedia -- owns 850 radio stations in 150 markets across the country. After Reagan stopped enforcing the Sherman Antitrust Act and the Supreme Court started using Bork's strict interpretation of antitrust, there was an explosion of acquisitions and mergers in every sector of the economy. Thirteen years later, Bill Clinton signed the Telecommunications Act of 1996, which led to an even more startling concentration of media in a very few hands by eliminating rules about the maximum number of media outlets a family or company could own. As a result, freedom of the press in America today is as much an economic issue as a political one.

In 2003, after Louise and I sold our last business in Atlanta and retired to rural Vermont, we drove to Michigan to visit family for Thanksgiving. All the way there, we searched the radio dial for an intelligent conversation to listen to, but city after city all we found was Sean Hannity at a Habitat for Humanity site (he called it "Hannity for Humanity"), telling us that "no liberal" was ever going to live in the house they were helping build.

It was a bizarre experience. Having worked in radio back in the '60s and '70s, I had some knowledge of the industry, so when we got home from Michigan, I wrote an article, "Talking Back to Talk Radio," about how liberal talk radio might succeed, if done right. Sheldon and Anita Drobny, a pair of progressive venture capitalists, read my article online, and as Sheldon noted in his book Road to Air America: Breaking the Right Wing Stranglehold on Our Nation's Airwaves (in which he reprinted the article), it became the template for a business plan for that ultimately ill-fated network.

But rather than wait the almost two years it took the Drobnys to launch Air America, Louise and I, with the help of a local radio guy and friend, Rama Schneider, looked around Vermont and found a station in Burlington that was willing to put us on the air. The slot was Saturday mornings at 10 a.m., right after the swap-and-shop, so many of our callers, instead of discussing politics, wanted to know, "Is that John Deere still available?"

Ed Asner was kind enough to come on as a guest, helping us make a tape that caught the interest of the i.e. America Radio Network, run out of Detroit by the United Automobile Workers. Suddenly, broadcasting from our living room in Montpelier, Vermont, in a studio I'd thrown together for a few hundred dollars mostly from parts bought on eBay, we were on the air nationally, including Sirius satellite radio, taking on Rush Limbaugh (and beating him in some markets) in the noon-to-3-p.m. slot to this day.

In 2004, when Air America was finally rolled out, it was successful for as long as it was in large part because its programs were carried by stations owned by what was then Clear Channel and is now iHeartMedia: we were on more than 50 Clear Channel stations in the nation's major markets.

Following a string of Democratic victories in cities and states where Clear Channel was carrying Air America shows, the company was purchased in a leveraged buyout by Mitt Romney's Bain Capital and Thomas Lee.

Meanwhile, the right-wing media machine continues to elect Republicans with big funding from right-wing corporations and the billionaires who own them and fund right-wing think tanks. As Ken Vogel, et al., pointed out in a 2011 article for Politico, "The Heritage Foundation pays about $2 million [a year] to sponsor Limbaugh's show and about $1.3 million to do the same with Hannity's -- and considers it money well spent."

To the best of my knowledge, none of the talkers on the left have ever been funded in such a fashion. Small wonder that Hannity now owns a real estate empire worth tens of millions, and Limbaugh can brag of an eight-figure net worth or more. But more important, the influence of those two well-financed talkers has altered America's political landscape in less than three decades. What this shows is that the movers and shakers on the far right, the libertarian billionaires, understand the power of media (and took Lewis Powell's advice).

Those of great wealth who are aligned with the left in America, however, have always largely ignored media, probably because they grew up in an America with the Fairness Doctrine and before the 1996 Telecommunications Act, and they always just assumed that "the truth will eventually be known."

But investing in political media can produce a huge return on investment and transform the politics of the nation. That's certainly what Roger Ailes and Rupert Murdoch thought when they lost an average of $90 million a year for about five years before the Fox News Channel became profitable.

Related Topic(s): Control Of The People; Controlled Media; Media Bias; Media Radio; Money Buys Power, Add Tags
Add to My Group(s)
Go To Commenting
The views expressed herein are the sole responsibility of the author and do not necessarily reflect those of this website or its editors.