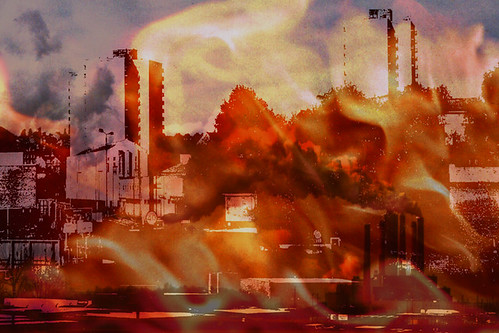 This essay comes with a caveat: that the process of descent into a failed state has already been very much at play. And for a long time, too. At least since the 2008 economic crash, the core of global imperialism has been transitioning into the kind of instability that its military has inflicted upon nations like Libya and Yugoslavia. And during this last year in particular, the collapse has been accelerating.

These initial stages of the societal unraveling, built upon the dismantling of social services, infrastructural neglect, and engineered living standard drops from our half-century of neoliberalism, have become most noticeable during 21st-century America's greatest moments of crisis. This is because during these points, the hollowing out of the country's social-support systems have made it undeniable that our civilization is increasingly unequipped to handle shocks. Hurricane Katrina with its massive needless suffering due to cruel neoliberal policies; Covid-19 with its more than half a million avoidable U.S. deaths due to the country's lack of a universal healthcare system; last year's California fires with their overburdening of a neoliberal state firefighting model that relies on prison slave labor; these are the ways that our late-stage capitalist socioeconomic paradigm has been multiplying the destruction from natural disasters and diseases, many of which have themselves been exacerbated by capitalism's furthering of the climate crisis.

This is the brutal instrument through which our capitalist ruling class is worsening the current stage of our civilizational collapse, the stage where kleptocrats engineer ways to make the crises worse so that the desperate population can be looted further.

The present step: "You never let a serious crisis go to waste"

The statement above was made by Barack Obama's chief of staff Rahm Emanuel, who was observing about the 2008 financial crash that the drivers of capital now had an "opportunity to do things that you think you could not do before." And even before the government put these words into action by funneling hundreds of billions to Wall Street while making the financial system too concentrated to properly regulate, neoliberal policy-makers were applying the same logic when it came to Hurricane Katrina. As Jamie Peck wrote in the 2007 essay Neoliberal Hurricane: Who Framed New Orleans?

What began as a 'decidedly unnatural disaster', in Neil Smith's words, has been ruthlessly transformed into a malformed reconstruction programme that blames, and morally reregulates, the most vulnerable victims, while setting in train '[w]holesale gentrification on a scale unseen in the United States'. This is about as far from a 'people's reconstruction' as one could imagine... a programme of contracted-out urban structural adjustment, designed in Washington and New York. An urban catastrophe that disproportionately impacted the poor, the infirm, and the elderly perversely resulted in the pairing of programmes designated for precisely these groups. According to the neoliberal script, it was not a lack of resources, private transportation, or out-of-town support systems that placed some of the most-needy New Orleans residents in the storm's path; it was the long-run consequences of urban welfarism... and its racialized cast of supported characters, including the workless, the feckless, and the lawless, absentee fathers, inert mothers, and criminalized youths.

In the years since then, as the country has been afflicted by increasingly severe fires, storms, and droughts along with a pandemic, those eager to profit from disaster have expanded upon this model of pushing out the most vulnerable. This systemic driving down of living standards in relation to the climate crisis and our recent public-health catastrophe have been a vicious cycle; Covid-19 and the extreme weather events have both given neoliberal politicians an excuse for further deregulation, austerity, wage cuts, and privatization, and have been made more destructive by the neoliberal policies that existed prior to these events.

In the next several decades, this feedback loop is going to keep getting worse. Our ruling class, facing a decline of U.S. global hegemony and a weakening of capital as a result of the current "Greater Depression," will squeeze us more than they've ever squeezed us. It's estimated that the climate crisis will facilitate the largest upward transfer of wealth in U.S. history, with the country's poorest counties being expected to lose up to 20% of their income by the middle of the century. And this is just the most surface-level aspect of the turmoil which the lower classes are going to be thrust into, in addition to the economic deprivation they're already experiencing.

Last year, environmental reporter Abrahm Lustgarten explained just how many people in the U.S. will be forced into slum conditions, homelessness, and effective refugee status by the coming climatic disasters:

Across the United States, some 162 million people--nearly one in two--will most likely experience a decline in the quality of their environment, namely more heat and less water. For 93 million of them, the changes could be particularly severe, and by 2070, our analysis suggests, if carbon emissions rise at extreme levels, at least four million Americans could find themselves living at the fringe, in places decidedly outside the ideal niche for human life. The cost of resisting the new climate reality is mounting. Florida officials have already acknowledged that defending some roadways against the sea will be unaffordable. And the nation's federal flood-insurance program is for the first time requiring that some of its payouts be used to retreat from climate threats across the country. It will soon prove too expensive to maintain the status quo.

He expands upon these points to explain how the migration created by these destabilizing events will lead to further social breakdown:

One influential 2018 study, published in The Journal of the Association of Environmental and Resource Economists, suggests that one in 12 Americans in the Southern half of the country will move toward California, the Mountain West or the Northwest over the next 45 years because of climate influences alone. Such a shift in population is likely to increase poverty and widen the gulf between the rich and the poor. It will accelerate rapid, perhaps chaotic, urbanization of cities ill-equipped for the burden, testing their capacity to provide basic services and amplifying existing inequities. It will eat away at prosperity, dealing repeated economic blows to coastal, rural and Southern regions, which could in turn push entire communities to the brink of collapse. This process has already begun in rural Louisiana and coastal Georgia, where low-income and Black and Indigenous communities face environmental change on top of poor health and extreme poverty.

Even this understates the magnitude of the migrant crisis we're going to face. Those more temperate areas in the Pacific Northwest and the Mountain West are largely themselves going to be rendered uninhabitable; Lustgarten continues that "13 million Americans will be forced to move away from submerged coastlines. Add to that the people contending with wildfires and other risks, and the number of Americans who might move--though difficult to predict precisely--could easily be tens of millions larger." Already, the Mountain West is in the climate crosshairs in a way parallel to California, with the region experiencing the same kinds of increasing droughts, fires, and heatwaves that California is. It's another feedback loop in our vicious cycle of humanitarian crisis.

The next step: "drain the swamp of non-combatants"

Related Topic(s): Catastrophe; Decline; Empire; Militarization; Pandemic; Refugees; Revolution, Add Tags
Add to My Group(s)
Go To Commenting
The views expressed herein are the sole responsibility of the author and do not necessarily reflect those of this website or its editors.