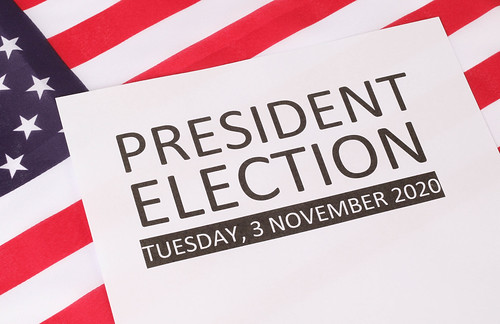 The media is full of speculations about the bedlam that may take place on and after election day when Trump is voted out. I say "when" not only because of Biden's favorable polls but for my tenuous belief in the sanity and wisdom in the majority of the voting public that sees through Trump's fits and antics that spell no good for our future. This trust in the nearly dormant spirit of Democracy to motivate our nation towards higher purposes and the welfare of everyone convinces me of the outcome of the election more than does the doubtful state-by-state analyses of the election experts and the fears of sinister plots to undo the election results.

But perhaps I am overly naive. Trump will not go quietly into that night of oblivion. He is desperate to remain in office, mainly for the selfish ends of protecting himself with the help of his co-conspirators against impending legal actions and potentially criminal disclosures. This should not be surprising, as anticipated in an earlier article posted here on December 31, 2016, quoted here:

"It is happening here: the impending tragedy of the Trump administration. In a nation already in decline by several decades of neo-liberal job-loss economics of corporate globalization, can we afford more of the same, especially with the health of the Earth in delicate balance? Should the president of the most influential nation in the world be a big question mark as to his personal integrity and dedication to the public trust, and even his mental stability - one who could be a danger to a stressed world?"

"What is to admire about Trump and his wealth? Do you measure the prosperity of a nation in terms of hotels, resorts, casinos, and golf courses? And what else don't we know about ""(d)id we ever see his financial status, his taxes? Taxes: there's a point. Should we brag about not paying any taxes when our government operates on taxes? Trump comes from the gambler's tradition - the house of cards, the sleight of hand, an ace up his sleeve."

"This could be a turning point in the Republican party. The consequences of the Trump administration could bring total discredit to the party resulting in a strong backlash, putting them out of power long-term and resulting in a progressive New Deal along the lines of Bernie Sander's "Our Revolution".

Assuming that the election goes according to this prediction, our country will still have to dig itself out of the deep hole it is in with the Covid-19 pandemic and the left-over mistakes and injustices of the Trump and prior administrations. Wherever possible, it is necessary to reverse Trump's reactionary directives and schemes, particularly those relating to environmental degradation and global warming, The first step of the new administration is the intention to counter the blunders of the Trump administration's handling of the Covid-19 pandemic. Could the restoration process go so far as to recall Kavanaugh and Barrett for further questioning by a new senate to redress their aborted confirmation hearings?

Related Topic(s): Election; Naive; Republican, Add Tags
Add to My Group(s)
Go To Commenting
The views expressed herein are the sole responsibility of the author and do not necessarily reflect those of this website or its editors.