Click Here to Remove All Ads
When recently asked by the media about her vote to invade Iraq, Hillary's response was a curt "I made it very clear that I made a mistake, plain and simple."
A MISTAKE? Helping to launch an unjustified war against a country we had no quarrel with? Helping to destroy a nation and thousands of its people? Causing a huge number of our own kids to be killed and horribly wounded? What a limited vocabulary Hillary possesses to reduce such an unconscionable act to a simple MISTAKE! 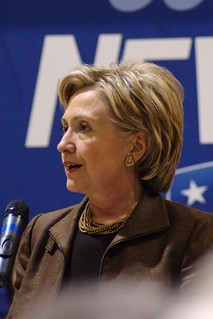 Hillary Clinton
(Image by marcn)   Details   DMCA
It's not so plain and simple, Hillary. and cannot be disposed of so lightly. It appears that your remark was designed to smoothe over the doubts concerning your vote. One can just hear your handlers saying, "They're going to try to make a big stink out of the Iraq thing, Hillary. So, the best way to get it out of the way is for you to admit you made a mistake and then quickly move on to another subject....that should do it." Ever ready to say or do anything to re-occupy the White House, Hillary complied.

If she were speaking from the heart, she would have apologized profusely. She would have admitted agonizing guilt in helping to perpetrate a disaster that resulted in horrendous catastrophe and which profoundly destabilized the Middle East. Were she sincere, she would have offered a detailed plan for re-building Iraq and a blueprint for a policy moving forward to bring peace. But, Hillary was just mouthing campaign gibberish. You can bet your (disappearing) bottom dollar that she feels nothing about that vote except regret that it obstructed to a degree her quest for higher office. One suspects that her vote was calculated to convince Conservatives that she was tough, without regard to its world-shattering implications.

Perhaps she can justify it by telling herself that most other senators voted for it, too. But, that shouldn't give her much comfort, really. She is supposed to be smarter and more analytical. She must have known the WMDs rationale was baloney -- I did, and so did millions of others. And, we didn't have privy to classified information as did Hillary.

When one thinks about it, one wonders why there appears to be such a huge surge for her to be President. She was a not particularly popular First Lady and only seemed to gain favor with the public when her husband cheated on her. Does this qualify her for higher office? Then, she became senator from New York, though not previously a resident. Pat Moynihan had a hand in that. She did not distinguish herself in that office. She went back and forth from an anti-war to a pro-war stance. At one point, she called for more troops to be sent to Iraq. In fact, when there was a lot of criticism for her wobbly stance, she started making noises about how she would end the war the day she assumed the Presidency. But then, another flip-flop -- she refused to say whether she would end the war by 2013. As she continued playing politics with Bush's war, she voted for the Patriot Act ".. TWICE! Hillary seemingly has no core ethics to guide her, but bases her decisions exclusively on her estimation of what will bring her the most votes. She hasn't got the courage of her convictions because she HAS none.

She did not sponsor any significant legislation as Senator. Her most memorable bill was one she co-sponsored at the end of 2003 to ban flag-burning, seemingly out of nowhere. An absolutely pointless action, particularly in view of the fact there had been virtually no flag-burnings to speak of for many years. It so obviously was a strategic move to position herself favorably right smack in the political middle, and of absolutely no value in solving the terribly critical issues facing us at the time.

It is hard to evaluate her performance as Secretary of State. The record is unclear. However, we see that the Middle East is in worse chaos than ever, the Russians have been acting belligerently, Africa is a bloody mess, the United States is perceived negatively in many parts of the world, and generally things don't look too good. We cannot lay the blame at her doorstep, really, until we have more information, but we can at least conclude that nothing much was achieved under her steward(ess)ship.

And now we face the impossible duty of having to vote in the next Presidential election. If expectations that she is the inevitable Democratic Party's nominee are correct, what are we to do? It is unthinkable to vote for any of the Republican clowns currently scrambling to be contenders. To my mind, it is equally impossible to vote for a third party candidate. it has never worked, in my experience, except to pave the way for George W Bush and other frighteningly inept people to assume the office.

What to do? What to do? How did we get to this place? And, will we ever recover?

JOAN WILE -- author of newly-published book,
GRANDMOTHERS AGAINST THE WAR: GETTING OFF OUR FANNIES AND STANDING UP FOR PEACE (Citadel Press, May 2008 -- available at amazon.com and in book stores), which is an account of her founding of (more...)

Related Topic(s): Anti-war; Flip-flop; Hillary Backs Down On Iraq; Hillary Clinton; Iraq; Iraq Occupation Strategy; Peace; Presidency; Vote By Mail; Vote Flipping; (more...) Voter ID Laws; Voter Participation, Add Tags  (less...)
Add to My Group(s)
Go To Commenting
The views expressed herein are the sole responsibility of the author and do not necessarily reflect those of this website or its editors.

I'm a woman, a Democrat, and I don't support Hillary

WAKE UP, AMERICA! YOUR HOUSE IS ON FIRE!