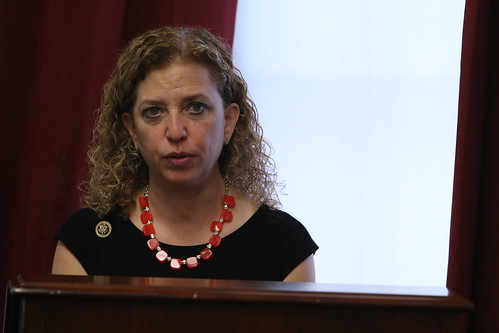 It's no surprise to me or, probably, most Bernie supporters, to see that the DNC platform committee people who are not Bernie supporters are blocking policy that Hillary gave lip service to, particularly TPP opposition.

Just as the time when Colin Powell told us that there were WMDs in Iraq and I shook my head and knew he was lying, I knew Hillary was lying when she said she opposed TPP.
Hillary did say that she'd re-evaluated the TPP and now opposed it. Yet her people at the DNC platform policy committee blocked a policy position that would oppose support of the TPP.
If Hillary wanted her people to oppose TPP, they would oppose it. It's that simple.
There's only one conclusion. Hillary lied about her position on TPP. That's the tip of the iceberg, I'm sure. This is not a small thing. Position on trade deals is huge. Here's what Bernie Sanders says,

"The lesson of Brexit is that while the very rich get much richer, working people throughout the world are not seeing the global economy and an explosion of technology benefiting their lives. In fact, in the United States the middle class has been in decline for 35 years while there has been a huge increase in income and wealth inequality. Unfettered free trade has made multi-national corporations more profitable and their CEOs richer, but it also has led to the loss of millions of good-paying jobs in this country and a race to the bottom.

"The challenge for us today is to take on the greed and power of Wall Street and corporate America, and create a government and an economy that works for all of us and not just the 1 percent."

"Unfortunately... the platform drafting committee voted down some very important provisions. Despite Secretary Clinton's opposition, as a candidate for president, to the Trans-Pacific Partnership, her supporters in St. Louis voted down a proposal to keep the trade deal from coming up for a vote in Congress.

The reality is the DNC represents establishment Democrats, the same ones who are the Superdelegates who committed to Hillary Clinton before Bernie Sanders even entered the primary. The DNC is not your friend, unless you are a big corporation.

Related Topic(s): Democrats DNC; Lies; Party Platforms DNC, Add Tags
Add to My Group(s)
Go To Commenting
The views expressed herein are the sole responsibility of the author and do not necessarily reflect those of this website or its editors.