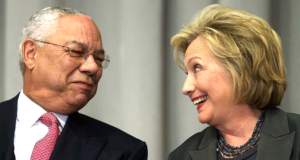 Despite her best efforts and those of her friends in the corporate media, Hillary Clinton cannot escape her email scandal. In an attempt to comingle her responsibilities as secretary of state with her influence peddling at the Clinton Foundation, she used a private server to conduct all of her official, classified government duties.

Hillary Clinton is quite a liar but she was never a very good one. It was only a matter of time before her use of the private email server came to light. She was fortunate to have Barack Obama let her off the hook. Her only punishment was public criticism from the FBI director who nonetheless said that he would prosecute anyone else who did the same thing.

Yet the story is still highly problematic at this stage in her presidential campaign. So much so that damage control was in order. Clintonite courtier and author Joe Conason volunteered to help by shoving former secretary of state Colin Powell under a bus. Conason coincidentally released excerpts from his soon to be published biography of Bill Clinton at just the right moment. It is interesting that the New York Times uses the passive voice in discussing its role in the saga, "The New York Times received an advance copy." In the nick of time Conason gave his friends an advance copy of the book to repeat Clinton's claim that Powell made her do wrong.

The gangsterish "no honor among war criminals" back stabbing shouldn't make anyone feel badly for Powell. As secretary of state in the George W. Bush administration Powell kidnapped Haitian president Jean-Bertrand Aristide and sent him into exile. Colin Powell made the most important public case for invading Iraq and the subsequent killing of one million people.

At a now infamous United Nations presentation he lied to the entire world about the existence of weapons of mass destruction in Iraq. Using nothing but aerial photographs and a laboratory vial as a dramatic prop he claimed to have proof of chemical weapons production. United Nations inspectors had discovered nothing of the kind despite numerous visits to Iraq, but no matter. Powell was the public face of regime change and mass death.

The Conason version of events is also telling in a way that the author may not have intended. Conason and Clinton say that Powell dispensed his sage advice at a dinner party hosted by Madeleine Albright. Not only were Albright, Powell and Clinton in attendance but so were Condoleezza Rice and Henry Kissinger. It was a reunion of war criminals past and present. The gathering is proof that there is always foreign policy continuity from president to president, whether Democrat or Republican.

While millions of people agonize over presidential campaigns and stridently make the case for their choice, foreign policy decisions differ very little no matter which party is in the White House. That much is obvious to anyone who pays attention but the gathering of the in-crowd at Albright's house ought to get as much attention as Clinton using Powell for cover.

"Powell was the public face of regime change and mass death."

When the story first broke Powell said he had "no recollection" of the conversation. But he is a "made" man in the foreign policy/ruling class mafia and realized he had to stick with the rest of the gang. So he had a different response 24 hours later. He conceded that he told Clinton his limited personal email use "transformed communications" in the State Department. It doesn't matter because rules became far more strict by the time Clinton took office. Her actions were clearly a violation of the law. The last gasp effort to put Powell's name in her mess is obviously borne of desperation.

Of course Powell is human and the Clintonian lies still rankle. He was somewhat peevish even after seeming to make peace with the rest of the gangsters. "Her people have been trying to pin it on me," he whined. "The truth is she was using [the private email server] for a year before I sent her a memo and telling her what I did." When asked to explain why he was the subject of Hillary's finger pointing, Powell made an obvious point. "Why do you think?" He then added a lie of his own. "It doesn't bother me. But it's ok. I'm free."

Obviously the blame Colin game does bother him. How could it not? But Colin Powell's history of his own lies makes it hard for him to be the object of sympathy. Even in giving his version of events he lets his co-criminal off the hook with "her people" pinning the blame. The underlings get Colin's wrath but the rules of omerta prevent him from mentioning the true culprit by name.

The back and forth between Clinton and Powell is misdirection for the naive. None of these people are worthy of trust and none of them can ever come out looking very good. The two mass murderers are behaving true to form and Conason represents the corporate media lackeys who always find a powerful person to latch onto. They make connections and money with their high profile patrons and present their collusion as if it were truly journalism.

The public have to thank a right-wing organization, Judicial Watch, for keeping Hillary on the hot seat. Their lawsuit resulted in a federal judge ordering Clinton to respond to their questions in writing and the last minute repeat of blaming Powell had to be resurrected.

The fact that a right wing group is bringing the dirt to light shouldn't dissuade anyone else from using it against Hillary Clinton. If progressives were truly progressive they would have dumped her long ago. Instead she is the meal ticket du jour for NGOs, the black misleadership class of politicians and civil rights organizations and others beholden to Democratic Party success to stay on the gravy train.

Related Topic(s): Colin Powell; Criminally Complict; Hillary Clinton; Hillary Clinton Emails And Server, Add Tags
Add to My Group(s)
Go To Commenting
The views expressed herein are the sole responsibility of the author and do not necessarily reflect those of this website or its editors.