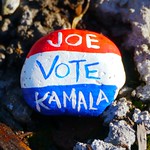 I've followed the Democratic Convention show and can almost believe you are the right person for the upcoming job of president, and that America is ready for you. I've read the Democratic Platform and what it has to say about protecting voting rights. Sounds good, but in the meantime irreparable damage may already have been done to the postal service that could affect the outcome of the election.

Considering the state of the union, we need strong signs that bold and immediate steps are taken to counter the mafia actions of our current administration. The dismantling of the postal service is a clear-cut subterfuge of constitutional magnitude.

The primary responsibility of any high government official in our nation is to perform his duties to the benefit of the people he serves. Don't they all have to swear to uphold the constitution and its stipulation to promote the general welfare? That would require him to maintain and improve the services of his office according to its stated purposes. On that score, to my knowledge, every member of the current cabinet is working against the integral purposes of his department - most notably, the secretaries of environment and education.

As one speaker at the convention said, we should not tolerate the current president in office for four more minutes, not to mention four more years. It would be a good omen for your forth-coming administration if you would speak out now and state, as a warning, how you would pursue justice against these culprits to rectify the crimes they are committing.

Related Topic(s): Subterfuge; Voting, Add Tags
Add to My Group(s)
Go To Commenting
The views expressed herein are the sole responsibility of the author and do not necessarily reflect those of this website or its editors.