Reprinted from www.yesmagazine.org by Yessenia Funes 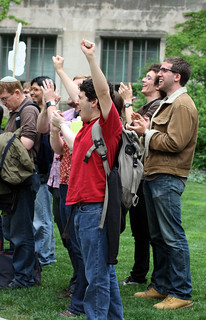 And the crowd goes wild
(Image by quinn.anya)   Details   DMCA

Every college semester, I filled out my financial aid application, hoping I would receive more grants than loans. Either way, my fate was sealed: I was a college student in the United States, so debt was inevitable.

The latest figures from the U.S. Department of Education are for 2012--13, my second year in college. That year, tuition, room, and board for undergraduates averaged $15,022 a year at public institutions, $39,173 at private nonprofit institutions, and $23,158 at private for-profit institutions. Most students spend at least four years in college. No aspiring college graduate I know has $60,000 lying around for four years of public college--let alone almost three times that for a private one. This has led to one of the United States' most crippling debts: $1.3 trillion worth of it.

As for me? I'm below average--but not by far. With $23,000 of student debt, I barely missed the latest average in 2013 of $28,400. But what can people do about this? Debt burdens more than just college students. It troubles the minds of homebuyers and credit card owners. It cripples entire nations.

A class I took last year addressed an option. My professor, Richard Robbins, a distinguished professor of anthropology, proposed a debt strike. He's calling for at least 20 to 25 percent of people to ignore their October 2016 debt bills. "Not pay my bills?" I thought. It sounded radical. But as he discusses in his forthcoming book, Debt as Power, co-authored with Tim Di Muzio, it's not that radical. He says he has a solution to our debt problem. The question is: Will I--or better yet, we--take a chance on it?

First off, I had to understand his idea more clearly, so I sat down to have a conversation with him. "You've got to use the only power that debtors have: simply to withhold their debt payments," Robbins said. How is not paying our bills an act of power, though? It sounds more like an act of cowardice. After Robbins compared the debt strike to a labor strike, an act of civil disobedience, it made more sense.

In a labor strike, employees refuse to work. They could, but they're saying they won't until their demands are met. The factory can't run until its employees return. The employer needs the strikers, so it's forced to hear them out. Well, creditors need debtors too. They rely on us. They give us money so we can make them even more money. They don't lend us money to be good Samaritans. They are running a business, a business that relies entirely on people borrowing their money and then paying it back with interest. Debtors keep the economic system afloat. In Robbins' words, debtors are cultural heroes. So in a debt strike, the heroes would use their now-realized power and refuse to make the villains more money. The strikers have the money to make payments, but they're choosing to ignore the payments--at least until their demands are met.

He also reminded me that he isn't the first to propose this idea. When Republicans in Congress threatened to not extend the debt ceiling last year, they were proposing a debt strike--on a big-boy, national scale. "If U.S. Congress and senators can propose a debt strike to get what they want, then it certainly becomes a legitimate strategy," Robbins emphasizes.Hearing all this inspired me. Then it concerned me. What about my credit rating? In a perfect world, that wouldn't matter, but in our credit-driven world, it does. If the strike goes as planned and a good 20 to 25 percent of debtors participate, Robbins says, no one can be penalized. That would be absurd. The number would be too vast, and creditors don't want to ruin their customers' credit, especially the ones who can afford to pay back their debt. He reminded me: They need us.

A debt strike isn't so far-fetched after all. When I asked Robbins how long we'd have to strike, he said he couldn't see it lasting more than four months without having enough effect on the economy to grab the attention of banks and the government.

Once we have their attention, the negotiating begins. In short, Robbins suggests we change how our current financial system works. Our current system destroys the environment, serves some more than others, and centralizes political power. "The problems that most people recognize as significant really cannot be dealt with in isolation from our financial system," Robbins explains.

If the strike gains momentum, candidates could no longer ignore the 99 percent

To start, he recommends creating more public banks, where governments loan money and return the interest to the public by spending it on the same things we pay taxes for. The United States has only one right now, the Bank of North Dakota, but countries like Brazil, China, and India have major public banking sectors. He doesn't say to get rid of private banks altogether but to have public ones running parallel to them. Right now, private institutions issue our money. They collect interest, which Robbins says amounts to some 15 to 30 percent of the national economy, so they become richer and richer. Big money pays for political campaigns, and it buys a lot of power. As for the rest of us? We get left behind. That wouldn't be the case with a public banking system. Our interest payments would be used for the public good. It would be from the people for the people--not from the people for the 1 percent. Oh, and no more income taxes. Our interest payments would take care of that.

If the strike does indeed happen in October 2016, that would be right before presidential elections. "That would force candidates--if they're speaking in public--to take a stance," Robbins said. If the strike gains momentum as Robbins hopes, candidates could no longer ignore the 99 percent. Even better, the newly elected president could weave the requests of the strike into his or her presidency.

The idea of a strike should appeal to any candidate on the political spectrum, left or right--at least Robbins thinks so. The proposed strike would address income inequality, a focus of Bernie Sanders' presidential campaign, and would aim to reduce taxes, an interest of Rand Paul's campaign. Robbins is even planning on sending Paul a copy of his book once it is out. "There's a lot in there that libertarians would identify with," he says.

The strike would address issues that affect us all: inequality, environmental degradation, and our economy. Everyone should be able to identify with the strike, be they activists, people of faith, or even the 1 percent. Robbins says the 1 percent might be fine now, but their children won't be--not if things continue as they are. The strike should invite people from all walks of life. I wonder if they would all participate.

YES! Magazine reframes the biggest problems of our time in terms of their solutions. Online and in print, we outline a path forward with in-depth analysis, tools for citizen engagement, and stories about real people working for a better world.

You can read new YES! Magazine every day online and every quarter in print. Ready to subscribe to the print magazine?

Today's world is not the one we want"”climate change, financial collapse, poverty, and war leave many feeling overwhelmed and hopeless.

YES! Magazine empowers people with the vision and tools to create a healthy planet and vibrant communities. We do this by:

YES! Magazine is printed on 100% post-consumer waste, chlorine-free paper. We reach more than 150,000 readers quarterly. More than 140,000 people visit our website each month, where we post new stories every day.

Related Topic(s): Student Debt; Student Loans, Add Tags
Add to My Group(s)
Go To Commenting
The views expressed herein are the sole responsibility of the author and do not necessarily reflect those of this website or its editors.

What the Classics Can Teach Us About Cherishing Holiday Foods, From A Christmas Carol to Moby Dick

Hero or Coward: Could Skipping My Student Loan Payments Start a Revolution?

The Education of Bill McKibben: How the Unlikely Activist Learned to Break the Rules