As Elizabeth Warren, Bernie Sanders and other presidential candidates duke it out over whose health care plan would be more ruinous to the American taxpayer, Medicare-for-all is presented to fiercely individualistic Americans as being more acceptable than 'government run' healthcare. The truth is that market-based government health care is inefficient and invasive, while unfettered government health care is cheaper and more effective. In 2019, the Trump administration invested in a massive advertising campaign to force seniors to choose from an array of managed care plans, which, unlike Medicare alone, offer perks such as eye glasses and dental care.

If Senator Warren's or any other plan is adopted, it is likely to be modeled on the system that Trump forced seniors to 'choose' in 2019 via aggressive marketing of extra benefits such as eye, dental and hearing care. It is referred to as "managed-care", and I can tell you that it is a nightmare. Within days of signing on, I received a large format publication listing the health-related pharmacy products that would be free up to a certain amount each quarter. (This is in addition to the monumental volume all Medicare recipients receive each year titled Medicare and You.)

Almost immediately, a nurse was on the phone wanting to schedule a three-way conversation with my GP, which I didn't think was necessary. A few days later another caller offered to have my medications reviewed by the plan's pharmacists in case there was incompatibility, or to eventually save me money by delivering them to my home. Every time I initiated or picked up a call, I was asked for my name, date of birth and street address, when I last saw my GP, and whether I'd got my flu shot.""(Doing some of these things actually go met a small cash 'reward'!)

Months later, hardly a day goes by without mail from my health plan marked, 'important health care information'. First, it's a rundown of recent doctors visits and tests, (backed up by several pieces of legally required information). A few days later you will receive the same list to which have been added the amounts paid accompanied by the same four or five pages of legalese. Each medication delivered is wrapped in several pages of detailed information, making it difficult to believe that the government is not subsidizing the wood industry. I have had to reserve an entire file box for this output.

Now, this typical bureaucratic abuse might be acceptable, were the services efficiently delivered. Sadly, they are being dispensed by companies that appear to have little or no experience, some of which one suspects may have been created ad hoc.

Take something as simple as a hearing aid. The person who picks up the phone on behalf of your plan will direct you the hearing coordinator, who will set you up with an ear, nose and throat doctor to test your hearing and order the device. A month will go by, and he will do nothing to find out why you have not received it. After several phone calls back and forth between the plan, its ENT coordinator, the doctor and the manufacturer, you will be informed that the device is 'on back-order because you chose gray'. No one will think of asking whether you would settle for a different color, and soon it turns out that the company doesn't know when it will resume deliveries. (Only then will the doctor be authorized to turn to another supplier.)

After a few of these episodes, your realize that the system responds to two basic American tropes: partly based on the cumbersome bureaucracy that handles daily military lives, the government is deemed inefficient by definition, and given the bootstrap conviction that any individual who asks for help is just lazy, government health care will be shabby, while claiming it's all about you.

So how does real 'government-run' health care work? France is considered to have one of the best health systems in the world, while spending much less than the US. Separate from their income tax, employees pay a health care tax based on earnings. (The self-employed pay a higher percentage, due to the fact that governments assume they are cheating the system.) But the decisive factor is that, instead of trying to appeal to the better instincts of insurance companies, every year, the government decides how much doctors, hospitals and pharmacies will be allowed to charge for every little thing, corrected for inflation. In a country where health care is truly a right, there is no such thing as the government refusing to pay for something and people going bankrupt from health care bills. At the same time, if you want to consult a high value specialist, or go to a private hospital, you're free to do so and pay your own bill, (with the help of a private insurer). I lived in France for 30 years, as well as in several other countries, including behind the Iron Curtain, so what I'm saying is based on direct experience. 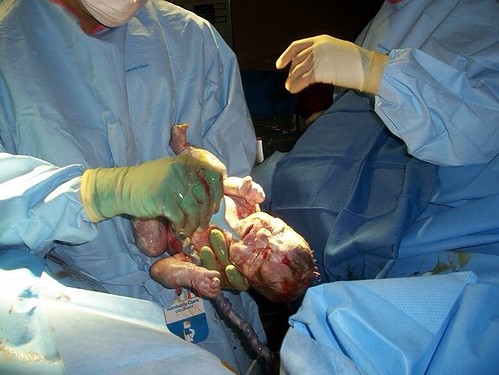 In France, the minute a baby is born (at no cost) she is assigned a social security number, and the proud parents receive a booklet in which they and health care providers will record her growing height and weight, inoculations at the prescribed time and any hiccups along the way.

Adults are expected to keep their own records up-to-date, and after every doctor's visit, they countersign the doctor's form proving you've paid your share (the equivalent of about $10 for a standard visit), so that he/she will receive the balance. Besides not being billed for hospital stays or maternities, you will have access to every imaginable ancillary care, not only dentistry and eye care, but physical therapy and even medical massages. Children are offered camp stays in summer, and the government subsidizes ski vacations during winter break for those who cannot afford them. I remember accompanying my eleven-year-old to the Gare de Lyon, where trains to the southwest originate, around ten o'clock at night, most of the students carrying their own skis. And after my hysterectomy, I was offered a caretaker for my ten and thirteen year olds so I could go to a rehab, although they were perfectly capable of taking care of themselves. There was no internet yet, so everything happened by phone. Although Paris at the time had three mail deliveries a day (subsequently reduced to two) I never received any mail from the health system.

Although it intervenes in the occasional African crisis, - and clings to its nuclear power - France can afford all this partly because it rarely signs on to America's expensive wars. Curiously, while making cost a determining factor, American candidates never mention this small detail.

P.S. There is another element worth mentioning: The 21st century medical system is based on technology rather than training and caring. In a system organized for profit, ninety-year olds who can barely walk are sent for physical therapy, which keeps them alive for a few more months, contributing to the health system's bottom line.

Related Topic(s): Healthcare; Healthcare Propaganda, Add Tags
Add to My Group(s)
Go To Commenting
The views expressed herein are the sole responsibility of the author and do not necessarily reflect those of this website or its editors.