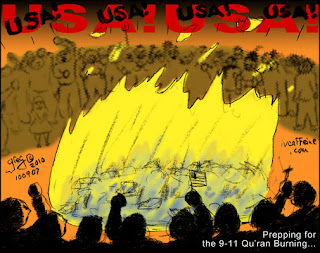 Burning books is an act of desperation and a lesson in futility. And a method of control. Forget the images of Fahrenheit 451 where books were kept from a hedonistic society by the government. Censorship and distrust of literacy have almost always been in the provenance of religion - at least in Western Civilization. And it should come as no big surprise that the first major book burning in recorded history was caused by righteous zealots:

The Western world's great storehouse of knowledge was in Alexandria, a cosmopolitan Mediterranean seaport in Rome's Egyptian province, where the wisdom of the ancient world was supposedly kept on scrolls. That centuries-old knowledge was preserved until 391 CE, when Emperor Theodosius, a Christian convert, ordered all non-Christian works eliminated. The Library at Alexandria, storehouse of the world's knowledge, was burned, the first of many book-burnings "inspired" by Christianity.

- from Don't Know Much About The Bible by Kenneth C. Davis

In other words, Rome had seen the light, became a "Christian Only" empire, and could no longer tolerate any form of non-Christian thought. Historians have opined for years that the reasons for stashing away the Dead Sea Scrolls and the Gnostic Gospels were primarily because of the Emperor's edict. In fact, after 391 CE, books were basically outlawed for several centuries, and the Gnostic Gospels were written in Coptic before the 5th century. During Nero's day, Rome boasted 29 public libraries. By the 5th century, there were none.

"There was a time when religion ruled the world.

It is known as the Dark Ages."

With the Roman Rule of Religion came the closing of Plato's Academy and all other "secular" schools. When good Saint Augustine came along and invented Original Sin (as we know it) only the rich could afford to have their children tutored by the religious authorities (Augustine himself studied under Bishop Ambrose of Milan). Scribes of the Bible were encouraged in literacy only insomuch as it would help them make copies of the Bible. Then after the fall of Rome, monasteries gained control of much of Europe's land. Monks, priests and (some) nuns were highly literate, but they kept literacy to a minimum outside the walls of churches, monasteries and abbeys to a point where kings could not sign their own names to documents. Charlemagne was basically illiterate.

When the printed word started to become common, it was forbidden for Bibles to be written in the vernacular. In 1380, John Wycliffe produced on of the first English Bible translations...

[Ken Davis] ... The authorities were not amused. Denounced as a heretic after his death, Wycliffe couldn't be executed. Church officials did the next best thing: they exhumed his corpse and burned it.

And as for the Quran or any other books written and read by Muslims, Queen Isabella's Spain trumped our own Rev.Terry Jones by 500 years and a few more books:

Thus on December 18, 1499, three thousand Muslims were baptized by force. These Moors had been told to bring all their books with them so they could watch them burn on the Plaza de Vivarrambla in Grenada.

The blaze was so spectacular that the estimate of burned volumes numbered about one million.

Control. Religious control. Of nations. Of denominations. Even the King James Bible itself came under fire when, in 1844, Catholics protested against it being read aloud in public schools.

Rev. Dan Vojir is has been writing/blogging on religion and politics for the better part of ten years. A former radio talk show host (Strictly Books " Talk America Radio Network) and book publisher, Dan has connected with some of the most (more...)
Related Topic(s): Book Burning; Books; Christians Only; Hitler; Monks; Predatory Religion; Religion; Roman Catholic Church; Uganda; Westboro Baptist Church, Add Tags
Add to My Group(s)
Go To Commenting
The views expressed herein are the sole responsibility of the author and do not necessarily reflect those of this website or its editors.