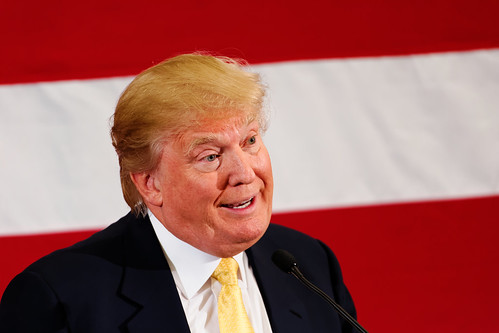 Even by Trump regime standards, the past several weeks have been unusually tumultuous. First, Trump botched aid to Puerto Rico; then he muffed condolence calls to widows. Now he's being condemned by two Republican Senators. Have we reached the long-awaited 'tipping point"? Is this the beginning of the end of the Trump era?

Since Trump took office, Democrats have been waiting for one of two events. Either Trump would mature and begin to act presidential, or his base would desert him. After nine months, it's clear that Trump is not going to change. (On October 24th, Republican Senator Jeff Flake deplored Trump's "reckless, outrageous, and undignified behavior.") Given Trump's inflexibility, are we nearing the point where his base deserts him?

According to the political website 538 (https://projects.fivethirtyeight.com/trump-approval-ratings/) Trump's popularity has remained stable for five months. It's currently at 56.7 percent disapprove and 37.2 percent approve; since May, Trump's approval ratings have stayed within a band of 54 to 56 percent disapprove and 37 to 39 percent approve. He's an unpopular President but, based on this metric, his base is sticking with him.

Democrats find Trump so repugnant that's it's hard to imagine that any American would support him. Nonetheless, he's tightened his grip on most Republican voters. There are three reasons for this.

The first is that Trump commands the right-wing media. While the mainstream media (MSNBC, CNN, New York Times, Washington Post...) has reported adversely on Trump's behavior, the distinctly right-wing media (Fox, Breitbart...) has been supportive. New Yorker columnist Elizabeth Drew noted Trump's political skills: "He can... make use of social media, Fox News, and friendly talk shows to keep [his base] loyal."

To gauge the gap between left-wing and right-wing media, turn on your TV and use the remote control to switch back and forth between "The Rachel Maddow Show" on MSNBC and "Sean Hannity" on Fox News. They two shows emphasize different topics and have dramatically different perspectives on Trump.

In addition, Republicans no longer trust the mainstream media. In August, The Economist (.economist.com/news/united-states/21725822) published a poll indicating, "When Republicans were asked whether they trusted Mr Trump more than the New York Times, the Washington Post or CNN, at least 70% sided with the president each time."

A second reason why Trump has tightened his grip on the Republican base is that he expresses their worldview. (The latest Gallup Poll indicates that 80 percent of Republicans approve of Trump.) In his classic, "Moral Politics," University of California professor George Lakoff notes that conservatives and liberals have two vastly different world views; conservatives have a "strict father" worldview and liberals have a "nurturant parent" worldview. Recently Lakoff observed: "Most Trump supporters have Strict Father morality... They see Trump as bringing America back to their values in a powerful way, making their values respectable and in line with the way the country is being run. Trump's presidency has given them self-respect. Their self-respect is more important than the details of his policies, even if some of those policies hurt them."

This worldview chasm is made clear by the difference between Democrats and Republicans on key issues. Recently Pew Research (click here) updated their landmark study of American political behavior on the left and right. On immigration, study participants were asked if immigrants "Strengthen the U.S. with hard work and talents." The average participant agreed (65 percent) but no "Country-First Conservatives" agreed (0 percent); they saw immigrants as "a burden."

Most Republicans see the world so differently from Democrats that they approve of a President whom most Democrats deplore.

The Pew study indicates why Trump has Trump has held onto his base but also suggests his vulnerabilities. Obviously, at some point he has to deliver on his promises.

In addition, the Pew study indicates that Trump's aberrant behavior is beginning to wear on Republican voters. Core Conservatives and Country First Conservatives generally approve of the way that he conducts himself. In contrast, only 24 percent of Market Skeptics like the way that Trump conducts himself as President; only 32 percent regard him as "even tempered." (Only 49 percent of New Era Enterprisers describe Trump as honest.)

The Pew data suggests there is room for Trump's approval ratings to plummet due to his "reckless, outrageous, and undignified behavior" and his failure to deliver on his key promises. We're inching closer to Trump's tipping point.

Bob Burnett is a Berkeley writer. In a previous life he was one of the executive founders of Cisco Systems.
Related Topic(s): Conservatives; Donald Trump Supporters; Evangelical; Immigrants; Immigration; Issues; Media; Politics; Republican; Tipping Point; (more...) Trump Attacks Senator Corker; Trump Cruelty; Trump Insults; Trump Mental State; Trump Non-stop; Trump Presidency, Add Tags  (less...)
Add to My Group(s)
Go To Commenting
The views expressed herein are the sole responsibility of the author and do not necessarily reflect those of this website or its editors.