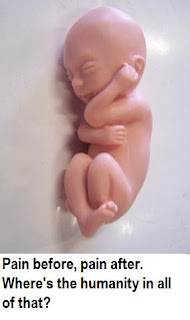 I've long had the stance that pro-lifers are actually pro birth, only caring that a child is born ... no matter the consequences. To some, "life" is only precious at the point of birth. And in the case of Danielle and Robb Deaver, neither life before, nor life after mattered to the State of Nebraska.

The Deaver story, as told by them below, is certainly heart-wrenching and, in short, involved a mother being forced to carry a child to term even though doctors said that the pregnancy would be painful, the child would be born prematurely, be seriously deformed and live for only minutes after birth. As Danielle put it, "we decided that some things were worse than death." Some "things?" Or some one like Senator Mike Flood and Julia Schmit-Albin of Nebraska Right To Life. Some media were more succinct about the situation:

Nebraska State Senator Mike Flood was the primary architect of the state's two-month-old law banning partial-birth abortions after the age of 20 weeks - no matter what the consequences.

"Even in these situations where the baby has a terminal condition or there's not much chance of surviving outside of the womb, my point has been and remains that is still a life."

Of course, the Nebraska Right To Life doyenne, Julie Schmit-Albin, came to the defense of the law:

"We acknowledge the tragedy that occurs with a poor prenatal diagnosis for the baby. But isn't it more humane for the baby to die in a loving manner with comfort care and in the arms of her parents than by the intentional painful death through abortion?"* (emphasis mine)

"We acknowledge the tragedy." The words seem hollow. While the pro-life movement has stressed that ALL children should be born no matter what the circumstance, it automatically erases any concern for the individuals involved and in some case, even that of the child: in the interview below, Danielle Deavers raises a good point: because of the child's inabilities to develop normally, how could she not think that the child was suffering? True, there was a heartbeat (evidently all that mattered to lawmakers like Senator Flood), but since muscles were pressing on the unborn child's head, she had to assume that the child was experiencing some discomfort. Added to those hollow words is this little point of sadism: since the Nebraska law reinforces a belief* that a fetus feels pain after 20 weeks, Danielle Deaver was right to be concerned for the suffering of her child. She was concerned, but obviously, the pro-life law of Nebraska wasn't. It's only concern was for the child to be born. Period.

One commenter on the situation brought up another concern: medical expenses. While the state forced the couple to proceed with the pregnancy, it certainly didn't feel liable for any of the medical expenses which added to the Deavers' woes.

I'm struggling here not to take on a possible little-Elizabeth-Deaver stance, but I'm losing the battle:

"OK, Ms. Julie Schmit-Albin, let's get this straight: the doctors say I'm not going to live past fifteen minutes. If, by the odd chance I do live, then I'm gonna be a vegetable gasping for breath for a while longer. Since I've been here in the womb for over 20 weeks, you believe I should feel pain. I've already had a hard time breathing in this place, but my mother feels a lot more pain than I do. She, being humane, thinks that both she and I would feel a lot better if things didn't continue. You, on the other hand, think that it's God's will that we both live through this. You, who are not related to me in any way, have passed a law that says I have to come out of this place into my mother's arms so that we both can suffer as long as possible."

At this point, while I'm not about to paint pictures of Flood and Schmit-Albin rejoicing at both pre-birth and after-birth agonies, I don't think their reasoning could be looked upon as humanitarian, although a glance at the Des Moines Register's piece and its comments section shows that both sides are screeching about "God" and the concept of being "humane."

People like Jill June, president of Planned Parenthood of the Heartland, took a more hopeful attitude:

"I think those that hear her story will be very, very moved," June said. "Hopefully some of them that are on this reckless stampede against a woman's right to decide with her doctor what is in the best interest of her health and well being - I hope they will hear her words and listen to her."

Rev. Dan Vojir is has been writing/blogging on religion and politics for the better part of ten years. A former radio talk show host (Strictly Books " Talk America Radio Network) and book publisher, Dan has connected with some of the most (more...)
Related Topic(s): Abortion; Abortion Rights; Abortion Without Exceptions; Fetus; Pro-choice; Sadism, Add Tags
Add to My Group(s)
Go To Commenting
The views expressed herein are the sole responsibility of the author and do not necessarily reflect those of this website or its editors.