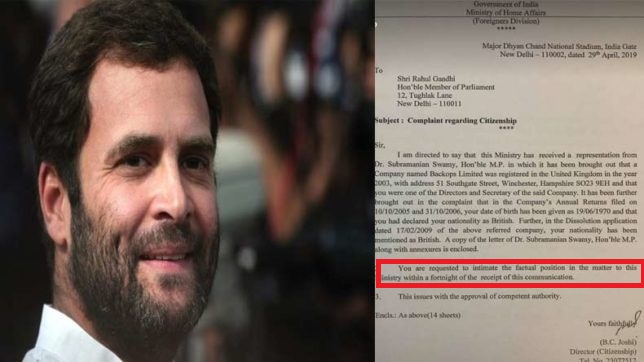 Rahul Gandhi and MHA letter: No reply yet?
(Image by newsbred.com)   Details   DMCA

There are some discourses you hear. Then there are others which are kept out of your sight. Out of sight, out of mind is a time-tested strategy.

So, let's begin with what you see and hear. Kamal Haasan and Rahul Gandhi. One is an actor turned politician; the other is a politician turning actor. Both fluff their lines but as we would see it has its own merit.

Kamal Haasan calls Nathuram Godse independent India's "first Hindu terrorist" for killing Mohandas Gandhi. Pragya Sadhvi, BJP's candidate from Bhopal, joins the fray by terming Godse as "deshbhakt (patriot)." Uproar is immense on either side. So who were real Godse and Gandhi?

Gandhi was greateven Godse said he folded his hands in front of Gandhi before firing from his country-made pistol. But Hindus, throughout Gandhi's political life in India, felt shortchanged by him. Godse, a microcosm of such feelings, felt cheated when Gandhi appeased Muslims in Khilafat movement in 1920s (who in turn massacred thousands of Hindus in Malabar riots as a return gift); when Gandhi kept his silence on a matter as grave as Assembly seats being reserved only for Muslim candidates on communal lines; when Gandhi and Congress hardly muttered as thousands of Hindus were raped and murdered under the call of Direct Action Day given by Mohammad Ali Jinnah in Bengal. Godse like many other Hindus, were anguished at butchering and rape of tens of thousands of Hindus in West of India, in what is now Pakistan, in migrations just before the Partition. He was absolutely horrified at the Razakars' violence against Hindus in Hyderabad which is little discussed in your history books.

One could say that Gandhi, the great soul, was looking for Hindu-Muslim unity. But his appeasement, ironically, turned out to be the most violent pacifism of human history. This is a fact. As is the fact that Justice Khosla, presiding over the Godse trial, said if the assembled courtroom was asked to pronounce their verdict on Godse, the overwhelming word would have been: NOT GUILTY. This is also a fact. As is the fact that Godse' testimony in courthe was his own lawyerwas so powerful that the Congress kept it banned for 20 years. You of course can now buy this testimony in the form of a book, Why I assassinated Gandhi. As you absolutely must read Manohar Molgaonkar's book "The men who killed Gandhi." This classic would leave you spellbound and hugely educated.

Now I want you to guess who said this:

"My own view is"Mr Gandhi had become a positive danger to this country. He had choked all the thoughts"As the Bible says that sometimes good cometh out of evil, so also I think good will come out of the death of Mr Gandhi."

Pragya Sadhvi? Nah. It's Bhimrao Ambedkar. Now please go and ask Congis to dare and criticize Bhimrao Ambedkar. Neither his progeny Prakash nor Gandhi's grandson Rajmohan Gandhi would ever mention it. So, nothing is sacred or gospel. Read and read and form your opinion. This is the first good which has come out of Godse storm around us.

Now let's look at Rahul Gandhi who has mocked Veer Savarkar no end up for "begging" British to release him from the dreaded Cellular Jail in Port Blair, the "Kaala Paani." Now guess who said this on the death of Veer Savarkar in 1966: "It removes from our midst a great figure of contemporary India. His name was a byword for daring and patriotism. Mr Savarkar was cast in the role of a classical revolutionary and countless people drew inspiration from him." No, not any RSS sanghachalak. Indira Gandhi said so. So Mr Rahul Gandhi, would you say your grandma, even though see was a contemporary of Savarkar, knew nothing about the great man?

Incidentally, The Ashok Gehlot Congress government in Rajasthan has removed "Veer" from Savarkar's name from its' educational school textbooks. You would have found this news in none of your Lutyens Media. This is how you stop a generation from knowing and being inspired by one of India's true legend. You can find a lot about Veer Savarkar in an old piece of mine. Vikram Sampath, who is writing a biography on Veer Savarkar, has a brilliant edit piece in today's Hindustan Times (May 17, 2019). The newspaper though seems to have developed cold feet since the article is nowhere to be found online.

Now let's look at what you neither see nor hear.

It's important for readers to know that they are victims of selective curriculum and biased discourse. While our newspapers jump up and down on Godse, and lap up Rahul Gandhi on his poison against Veer Savarkar, they would never question the Congress scion: Sir, aren't you past the date (May 16) by which you had to reply to Ministry of Human Affairs (MHA) about your alleged British citizenship? Whatever is happening in the contempt of court case pending against Rahul Gandhi? Or the lawyer who has presented evidence that there is a plot against Chief Justice of India? How many of you know that Rajeev Kumar, the controversial West Bengal cop against whom Supreme Court has found allegations to be "very, very serious," could be arrested today? Could "very, very serious" concern be about national security, terrorists hideouts? Shouldn't our media be training all their resources on this man rather than on US immigration on their front pages? Do you know that the "apology" of Pragya Sharma was never a "pre-conditon" for her release by Supreme Court as your newspapers have tried to project to you? And what's happening on "Chidambaran and son" case?

Question, question and question. And then draw your own conclusion. Don't be a sitting duck for your newspaper who would even come free as long as you are the chicken they can feed their agenda.

Related Topic(s): Appeasement; Congress; Muslim; Rahul Gandhi, Add Tags
Add to My Group(s)
Go To Commenting
The views expressed herein are the sole responsibility of the author and do not necessarily reflect those of this website or its editors.