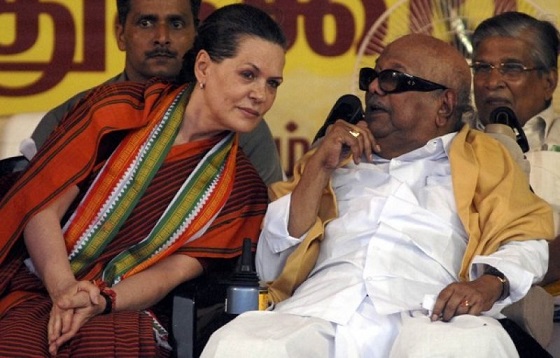 Right-wing ideologue Swaminathan Gurumurthy has alleged that former Congress president Sonia Gandhi once established links with killers of her husband Rajiv Gandhi so she could gain politically.

Speaking to a website, Gurumurthy said Sonia Gandhi contacted her husband's killer and LTTE chief V. Prabhakaran for getting the support of Dravida Munnetra Kazhagam (DMK) for the Congress. The Jain Commission of enquiry had suspected the DMK of having a hand in Rajiv Gandhi's assassination.

Gurumurthy is big enough for India Today magazine to rank him 30th in India's 50 most powerful people in 2017. He burst into limelight with his expose on Dhirubhai Ambani's Reliance Industries in the past. He is presently a part-time director of Reserve Bank of India (RBI) and edits the Tamil political weekly Thuglaq. He is also the co-convenor of the Swadeshi Jagaran Manch.

"According to the information I had from a third party, the Island Newspaper in Sri Lanka, which I had substantiated from my own sources back then and which I obviously cannot reveal, said that when Sonia Gandhi wanted to enter politics, she did not want any hostility with the LTTE. She said that the killers must not be hanged and that she had forgiven them. Secondly, she wanted them to support her," Gurumurthy said.

"If you can make a deal with the killers of your husband for politics, what is your karma? She traded her husband's death for politics," Gurmurthy said.

"She did not pursue the investigation into the conspiracies behind the assassination with the Multi-Disciplinary Monitoring Agency (MDMA) formed in 1998. She did not once pursue the matter during the UPA rule," the ideologue added. "This is much worse karma."

Above was in response to various tweets Gurumurthy made on Tuesday:

"With Sonia's entry into politics all her commitment to get her husband's killers to book evaporated. Afterwards she sought peace with her husband killers. She begged main conspirator LTTE's support to get its fan DMK to shift from NDA to UPA which was crucial to win 2004 poll.

"In 1999 she told President KR Narayanan privately neither she nor her son and her daughter wanted any of the convicts sentenced to death for killing Rajiv to be hanged. Thai was revealed by Mohini Giri (ex-head NCW) (See Frontline magazine friendly to the Left Nov 5-18 2005).

"Sonia was not in politics in 1997 when she demanded action against DMK for associating with LTTE to kill Rajiv. But after locked Sitaram Kesari who had gone to toilet & sat in Congress presidential chair, she changed. The first thing she did was to befriend her husband's killers.

"Sonia's & her mother's secret moves to beg LTTE's pardon seemed to have started ahead of Dec 2003 when DMK & congress appeared to have agreed on the alliance. In Jan 2004 Sonia met Karunanidhi and firmed up the alliance. In 1997 in Amethi she had hinted DMK was a fan of LTTE," he added, claiming, "Sonia pulled down UPF government in 1997 because she wanted DMK, accused by Jain Commission as being part of the LTTE conspiracy to kill her husband Rajiv, out. In 1997 LTTE & DMK were killers of her husband. In 2004 they became her allies.

So @RahulGandhi, what about Sonia's karma?"

The last punchline of course is to put Rahul Gandhi in place for the latter has been terming "karma" soon for Prime Minister Narendra Modi for terming Rajiv Gandhi as "Bhrashtachari No. 1" in a recent rally.

Another firebrand BJP leader and parliamentarian Dr. Subramanian Swamy has in the past accused Sonia Gandhi, P Chidambaram, a high-profile UPA minister and V. Prabhakaran, the once dreaded chief of LTTE of being hand in glove with each other.

Related Topic(s): Congress; Gandhi; Rahul Gandhi, Add Tags
Add to My Group(s)
Go To Commenting
The views expressed herein are the sole responsibility of the author and do not necessarily reflect those of this website or its editors.