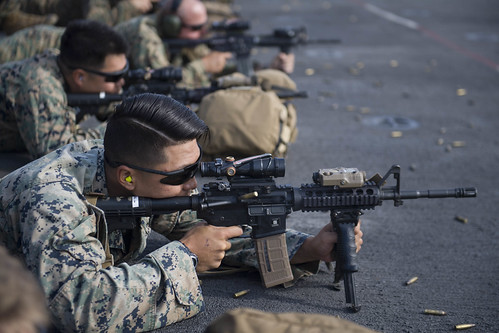 In the wake of the recent mass killing in Las Vegas, carried out by weapons the private ownership of which is protected (according to some) by the 2nd Amendment to the Constitution, there is now a large public debate about whether such weapons should be banned or their ownership more tightly restricted. The argument for banning or more strictly controlling these weapons is, of course, that they can kill a lot of people very quickly so why in the world would any sane society want them to be available for some deranged person who could use them to kill lots of innocent people? A related argument is that guns of all kinds are dangerous objects that sometimes accidentally kill innocent people, for reasons such as the gun going off unexpectedly or a child gaining access to it, and this risk, some say, outweighs the value of a good guy with a gun being nearby to stop a bad guy with a gun in a home invasion, a rape, a mass killing or some similar criminal situation.

The "guns are dangerous" argument versus the "a good guy with a gun protects against a bad buy with a gun" argument can be argued either way with statistics and anecdotes, and there are good people on both sides of the issue. But the Founding Fathers thought the importance of the 2nd Amendment had nothing to do with protection against criminals; they saw the right to bear arms as the only way for ordinary people to defend themselves against an oppressive government.

The fact that our United States government is indeed oppressive, and that the police departments are an instrument of oppression that uses armed violence or the credible threat of armed violence routinely, cannot be denied and is discussed here in the case of the Boston Police Department (known as one of the least oppressive and least racially biased in the country) and here regarding United States police departments generally. Whatever the merits--pro or con--of the Founding Fathers' arguments about the right to bear arms being important to protect against tyrannical government, one thing is for sure: tyrannical government is as much a legitimate concern today as it was back then.

This list of quotations from many of the Founding Fathers makes their reason for defending the right to bear arms--to defend against tyrannical government--very clear. Ben Franklin put it this way: "Those who beat their swords into plowshares usually end up plowing for those who didn't." Thomas Jefferson said, "What country can preserve its liberties if their rulers are not warned from time to time that their people preserve the spirit of resistance. Let them take arms." (True, the Founding Fathers were worried about the tyranny of King George III, not the tyranny they themselves practiced against slaves and poor farmers; when subsistence farmers revolted in 1786 against the tyranny of the rich in Shays's Rebellion, George Washington organized a private army led by the rich to attack them, and Sam Adams called for them all to be hung!)

Even if guns are too dangerous and the prevalence of bad guy criminals too low to justify making guns omnipresent, the Founding Fathers' argument would nonetheless tip the scales in favor of the right to bear arms--if that argument still made sense in the 21st century. But does it still make sense?

The Founding Fathers lived at a time when the arms of even the state's best-equipped military forces were not substantially different from the arms that private individuals could obtain. Today it is very different. Handguns and semi-automatic rifles are no match for the 82nd Airborne Division's weapons of tanks and missiles etc. If the Founding Fathers' argument has been rendered moot by the modern state's military might, then the right to bear arms is much harder to defend against those worried about fatal gun accidents and deranged mass killers with semi-automatic rifles.

What About the 82nd Airborne Division?

Despite the tremendous power of the U.S. military in contrast to even the famous "well regulated militias" of the 2nd Amendment, however, the words of Ben Franklin and Thomas Jefferson cannot be dismissed; in fact they are arguably more relevant today than ever. The reason for this is not that guns and semi-automatic rifles can defeat the 82nd Airborne Division. The reason is that, as I discuss below, the right to bear arms will help Americans persuade members of the 82nd Airborne Division (and the rest of the Armed Forces) to join them in removing our 21st century tyrants from power.

The United States is essentially a dictatorship of the rich. A ruling plutocracy of billionaires and their obedient corporate managers and politicians call the shots. They are making our society increasingly unequal and undemocratic. They are stripping us of the liberties that we once took for granted, such as habeas corpus (the right to have a court examine the lawfulness of one's detention, won in the year 1679, and abolished in the United States by the National Defense Authorization Act of 2013). This dictatorship of the rich has pushed economic inequality to obscene levels, has left more and more Americans unemployed or working at jobs that pay too little, has driven homes into foreclosure, deprived families of adequate medical care, saddled young people with huge student loans, caused environmental disasters like BP in the Gulf, and sent loved ones to kill or be killed in wars based on lies. The future holds misery for the many and privilege for the few. These and other problems are part of a system in which money is power and most people don't have any. The powerful men and women who run our world were not elected and cannot be unelected. They can only be removed from power by revolution, a revolution to break the power of the ruling elite and create a society run by and for the people: a true democracy.

But where do privately owned guns fit into the scenario of a revolution? Can privately owned guns defeat the 82nd Airborne Division? No. But who's to say that the 82nd Airborne Division (or at least a substantial part of it) won't disobey orders to attack their neighbors and friends and relatives in a broad, popular mass movement with the revolutionary aim of creating a genuine democracy and removing the plutocracy from its undeserved and illegitimate power? Who's to say these soldiers and sailors and marines will not use their ferocious weapons to defend that movement against those who would attack it? Who's to say, in other words, that the vast majority of Americans cannot gain the support of enough members of the armed forces to prevail against those who would continue to fight to keep the plutocracy in power? There is no reason why this cannot happen. What it requires is building a mass revolutionary movement that makes its aims for a more equal and democratic society widely known, a revolutionary movement that members of the armed forces will see is both morally right and also determined enough to be worth supporting despite the personal risk in doing so, the risk that if they refuse orders to attack the revolutionary movement and the plutocracy remains in power they will be severely punished.

The Role of Guns in the Revolutionary Movement

How will members of the armed forces know that the revolutionary movement is so determined to win that it makes sense to refuse orders to attack it and instead to defend it? One indication that the revolutionary movement is determined is if it uses arms in self-defense when it makes sense to do so. Which raises the question, does it ever make sense to do so, given the overpowering force of the 82nd Airborne Division? The answer is yes, sometimes it does. The reason is that violence always occurs in a political context in which each side in the conflict must, in deciding whether or not to use violence, consider the political consequences--will it increase or weaken the support one has from the broader public.

The ruling class knows that when working class people in a particular location have a lot of public support in that region (even if people elsewhere don't support them), then it might be politically counter-productive to employ the full violence of the U.S. military to defeat these people when they're fighting for some limited non- revolutionary demand, even if they have resorted to violence themselves. If the wider public saw the National Guard, for example, ordered to attack armed working class people fighting for what most people believed was a just cause, the result could be even greater public support for the people attacked by the National Guard, decreased support for the government, and--most dangerous of all for the ruling class--increased numbers deciding that a revolution is necessary. The political cost of ordering the U.S. military to attack Americans is often so great that the ruling class decides not to do it and instead to let an armed working class struggle win, at least in the short term.

This is why working people in the United States have often in the past been able to use violence in self-defense advantageously. Labor strikes sometimes involved workers using arms or other forms of violence. In 1921 in West Virginia coal workers on strike defended against cops and goons with an armed rebellion in what is known as the Battle of Blair Mountain. During the General Strike in San Francisco of 1936, dockworkers used threats and physical violence to deter scabs. On August 2, 1946 veterans, after their nonviolent efforts failed, used their weapons to successfully remove corrupt politicians from office in McMinn County, Tennessee, in what is known as the Battle of Athens. The anti-Vietnam War movement included American GIs fragging (killing by grenade) gung-ho officers who ordered them to risk their lives attacking the Viet Cong. The Civil Rights Movement against Jim Crow laws and racist police harassment involved Martin Luther King, Jr. seeking a gunpermit to carry a gun for self-protection (the permit was denied) and using armed guards to protect himself from racist thugs, and it involved armed stand offs between blacks and racist cops as when the Black Panthers stood their ground with rifles against the police of Oakland, California.

I am the editor of www.PDRBoston.org and www.NewDemocracyWorld.org, the author of No Rich and No Poor: The Populist Goal We CAN and Must Win, Divide and Rule: The "Left vs. Right" Trap, The People as Enemy: The Leaders' Hidden Agenda in World (more...)

Related Topic(s): Class; Class Action Lawsuits; Class Politics; Class War; Class Warfare; Crime; Democracy; People; Police; Working Families, Add Tags
Add to My Group(s)
Go To Commenting
The views expressed herein are the sole responsibility of the author and do not necessarily reflect those of this website or its editors.

STAY IN THE KNOW
If you've enjoyed this, sign up for our daily or weekly newsletter to get lots of great progressive content.
Series: "No Rich and No Poor"

What Do "White Supremacists" Believe?

Beware of the Universal Basic Income

Free Will: Why the Ruling Class Wants Us to Think It's an Illusion, and Why It's Not

Here's How the Ruling Class USES the Left