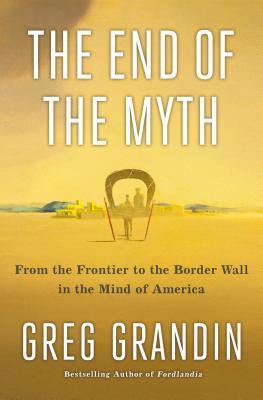 The End of the Myth
(Image by Greg Grandin)   Details   DMCA

"A person does not lightly elect to oppose his society. One would much rather be at home among one's compatriots than be mocked and detested by them...[but] it is terrible to watch people cling to their captivity and insist on their own destruction."... James Baldwin, No Name in the Street

There's a before and an after the COVID-19 pandemic. I began reading Greg Grandin's The End of the Myth: From the Frontier to the Border Wall in the Mind of America in the before era, that is, in February of this year. I read a few pages and then set the book aside. In fact, after a few days of it sitting on my desk, I decided I didn't have the time or the inclination to read the book, and so placed it on a book shelf where other American history books reside. The end of a reading of that particular history.

Until after the pandemic and the murder of Ahmaud Arbery.

I've read so much history, in fact, I've read more history in the last twenty years than I've read literature. An understanding of American history, the version not taught in my 1950s and 1960s education, for that matter, not even during my college years in the 1970s, is vital if an American, whatever stripe, is to understand how to relate to other Americans who's history doesn't reach back to the Vikings or the Goths. Or Anglo-Saxons.

How did the Indigenous people, in the millions throughout the so-called New World, respond to the arrival of old boy, Christopher Columbus? Why was it important for the Anglo-Saxons settlers to create an international business and market around the capturing, selling, placing, and patrolling of Africans and African Americans? How did the movement to go West further disrupt the lives of millions of Native Americans and eventually encouraged and emboldened capitalist adventurers to sail the world again and capture not just more free labor but also land and all the resources to be had on that land?

I guess I was just burned out in February. The country was just hearing about the Coronavirus. Although we now know, the government knew long before. I was told in January, by my new oncologist, that if I could just get through this fifth year of Multiple Myeloma, without the numbers rising significantly, then the chances of a full-blown outbreak of the cancer would decrease every year thereafter.

When the pandemic outbreak forced states to issue stay-at-home orders, I decided to read literature. And then here's a man jogging along a road. There's a truck and two white men. They have weapons, and the jogging man is Black.

I went to the bookshelf where I placed Grandin's book and started reading. And I'm still reading The End of the Myth when Minnesota Police Officer Derek Chauvin, ever so casually presses his knee on the side of George Floyd's neck for almost nine minutes. His freedom, so he believed, gave him the right to do so.

In the chapter entitled, "A Caucasian Democracy," Grandin writes about the history of freedom in America. How the idea of "frontier" became synonymous with the idea of freedom. Freedom to roam, to expand one's horizons and build on wild open space--- yes, the land had always been wild open and free of inhabitants, right? That's what the adventurers of the West read in the school textbooks in the 1800s.

By then in the 1800s, with the Indigenous having been removed, killed predominantly before marginalized to small patches of land, "the word 'frontier," writes Grandin, had come to mean not a line in the proverbial sand, "but a way of life, synonymous with freedom."

Whites, in other words, can't be told what to do, where not to go, where not to live, and more recently in 2020 what to wear on their faces. Or try to instruct them in staying at home during a pandemic when they know the one's dying in droves aren't them, but predominantly the Black, Latinx, and Indigenous peoples.

Back in the 1800s, the "removal operation" accomplished the task of teaching Americans that the original inhabitants were so unfit as to necessitate their removal in order for more competent and worthy people, true Americans, to tend to the land. And grow. There wasn't anything to feel bad about, in other words, for it's the creation of a "distinct culture," one that justifies the use of violence as a means of turning the land into safe spaces for Caucasian democracy. And that, of course, meant, removing "savage" obstacles for the expansion of white citizens and capitalist profiteers.

In other words, the nation's drive west in the creation of a democratic society for Caucasians is further evidence of the formation of white supremacy as a founding ideology. The demand for docile people of color in this Caucasian democracy to serve as a free labor force is contrary to a reality of a nonwhite (as it was at the beginning) society that is, thanks to conquest and enslavement, a bedrock of inequality.

I have to pause here in the reading because this chapter, an engrossing narrative, is about that horror of narrative that begins again to solidify a collective mindset into believing in Caucasian superiority. Again. It's Christopher Columbus riding returning to lead the charge from the New England settlements, pass the Mississippi, clear through to the Rocky Mountains. The carcass of women and children, fathers and husbands cleared away or left as food for the vultures.

Related Topic(s): America; Brutality; Culture; Freedom; History; Invasion; Pandemic; Police; Removal; Violence, Add Tags
Add to My Group(s)
Go To Commenting
The views expressed herein are the sole responsibility of the author and do not necessarily reflect those of this website or its editors.