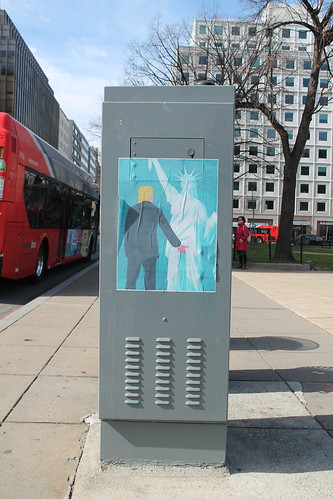 Trump is a mad man in a blizzard orchestrating the removal of freedom in a country called America.

In the following way, he tells one (lonely) truth. He is the President getting more things done in his first 100 days than any other. To understand this, we count the number of dastardly missions accomplished since his beginning.

Should we start with Trump today rolling back rules from Michelle Obama's school eating initiatives to combat obesity or Trump's White House invitation to Rodrigo Duterte, the murderous leader of the Philippines, and count back from there? Or shall we start with either his "p*ssy"-grabbing brags or his false statements about the bigness of the Inauguration crowd and move forth? Surely if he had a mentally well character, he would not be broadcasting what he is "achieving". In this way, it is not just his deeds but his pride in himself for these "achievements" as he blasts them forth, that reveals his sickness and the danger of him.

While psychology experts are calling him "narcissistic", it may be more accurate to inquire about the actual condition of his brain.

Narcissism is surely in the mix, yet that alone would only account for the need to be unconditionally loved as well as to side-step personal responsibility.

It seems to me that following his Inauguration, he abruptly dispensed with people-pleasing and has devolved into a mad destroyer of all that is humane. His extreme shift to being disinterested in whether the audience loves him is particularly disturbing. The hope was that, as a narcissist, he would keep a tangential concern with the level of popularity every one of his actions or intents would glean, and thus steer the ship accordingly. No such luck, it appears.

Perhaps his new audience is exclusively internal, and is not "the American people". Ha. And the voters thought he cared.

Regrettably, psychological categories and analyses do not help us, as news of the daily plundering of all that is good and decent in our way of life, flies on and off the headlines. How to absorb the alarm? Each news flash replaced with something worse that he either does or says he is contemplating.

Aside from freedom, dignity, compassion, unity, we are also quickly losing our sense of humor.

There is a short comedic shelf life for evil before it becomes unwatchable. The novelty of Trump is on fade-out.

The government is so currently wacky that Saturday Night Live can no longer provide relief. Watching Saturday Night Live is like watching an irritating, unnecessary, not-funny imitation/ reenactment of the week's irritating, unnecessary, not-funny news. I can't watch it anymore, even as I know how spot-on the impersonations are. Extreme impersonations, such as Alec Baldwin's Trump, are redundant. No one can touch the outrageousness of Trump himself.

Satire is currently DOA in the face of the truth.

And that, my friends, may be the worst thing of all.

As long as there is levity, the wheels of our intelligence are oiled for a comeback, for our imaginations to save us, for brainstorming our way out of our imprisonment.

I am a writer, media analyst, and psychotherapist. I'm interested in comedy, satire, politics, entertainment, pop culture, and business; exposing how the media powerfully spins the news we hear, and how this spin creates our feeling states and (more...)

Remembering Whitney Houston: The Quiet Curse of the Homophobic Mother

Grabbing Power (and Humor) by the "Pu**y"

I Love Me!: New Stories For Children

Franken "Trauma" Vs The Real Thing