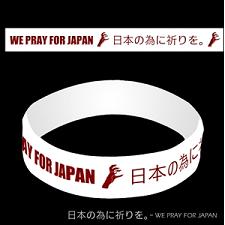 There's definitely going to be a battle between Lady Gaga and Pat Robertson.

WTF? Yes. While the Christian Right will be scurrying to set up electronic Bible Broadcasters as they did in Haiti, Lady Gaga's "prayer bracelet" may be more effective in helping the Japanese recover from the latest disaster. You see, hers is a true prayer for Japan because it comes with cash for food, clothing, medical supplies. The poor "pagan" Japanese (Buddhist, Shinto, Confucian), alas, cannot wear, eat or apply Bibles to wounds.

I know that sounds quite spiritually callus, especially coming from a Christian, but it's true. With the exception of Operation Blessing (which has largely divorced itself from founder Pat Robertson ever since the mining equipment scandal*), faith-based agencies will be under a very watchful eye (including mine). The Asian Tsunami attracted Jerry Falwell (who, along with supplies, sent 600,000 Christian tracts to Hindus and Muslims), Hurricane Katrina attracted Pat Robertson ( who immediately poured 40,000 Bibles onto people  - dead or alive), and Haiti brought out a Christian group that deposited electronic  "solar-powered Bibles" (at $90,000) to blare out Biblical passages as people fought off disease. Years ago, I called the whole mess of missionaries "God's Ambulance Chasers." Since then, the article still comes out on top for Google searches. In fact, it may be the only phrase this poor writer will ever be known for.

Disasters. They really do bring out the best in people, in humanity. But rushing to evangelize after a tragedy can be akin to circling vultures. It's no secret that I'm against proselytizing, but inundating people who have been devastated by a cataclysm, a people who are of a different faith, with pleas to convert is ...wrong.

And soothing words are cheap.

The rush to insult another religion is also wrong, but righteous arrogance is strong: Falwell couldn't understand why people were appalled that he sent so many leaflets about the "Word of God" to suffering Hindus and Muslims. The people, thankfully, summoned enough dignity to to reject the paper cargo. Falwell was not amused. Robertson was also criticized for his rush to rain Bibles onto New Orleans, then he compounded the insult by his "contract with the Devil" remarks. To be fair, while supermarket tabloids are now trumpeting Robertson's impending senility, many people have thought him senile for the last thirty years, so his actions are considered almost meaningless. As God's ambulance chaser, he's been retired.

So with Robertson retired and Falwell long gone, who will take up the gauntlet and become the next ambulance chaser of natural disasters? Lou Engle? Sorry. Lou Engle IS a natural disaster (just ask gays in Uganda). Rick Warren? I don't think so. Warren's too busy creating "Purpose Driven" countries (again, just ask Uganda). My bet is on Franklin Graham and his group, Samaritan's Purse. He may try to weasel in a proselytizing rally or two after humbly distributing food. Did I say humbly? Hmm. Well, maybe not too humbly.

Staff members are on their way to the affected area. We will be working with Japanese Christians to distribute food, water, blankets, hygiene supplies, and other aid to people who have lost virtually everything.
Samaritan's Purse President Franklin Graham has conducted evangelistic Festivals in the Japanese cities of Osaka and Okinawa, and we have hundreds of church partners in the country.

On Samaritan's Purse efforts in Sudan:

Samaritan's Purse has trained thousands of people from local churches to lead the reading groups. People who join the groups receive free Bibles. For many, it is the first they have ever owned.

Yes, it may seem petty and anti-Christian to monitor such a group, but my premise lies hidden in the name of Graham's charity: the Good Samaritan of Christ's New Testament did not come back with a tract on Samaritan religion. The Good Samaritan, in fact, did not proselytize: he may have simply gone on his way doing good for others. Period.

No matter what I thought of him as an actor, Sean Penn captured my adoration in his valiant efforts in Haiti. Some movie stars are like that: combining their fame with the determination to get relief under way makes them more beautiful. And when a celebrity who has been endlessly pilloried by the Christian Right as being immoral performs a creative feat of fundraising for disaster relief, she becomes more than beautiful, she becomes ... stellar.

The speed with which Lady Gaga came out with her "prayer bracelet" was amazing. The ingeniousness of the product was incredible: proving that spirituality can come in all forms and can transcend religion itself.

Rev. Dan Vojir is has been writing/blogging on religion and politics for the better part of ten years. A former radio talk show host (Strictly Books " Talk America Radio Network) and book publisher, Dan has connected with some of the most (more...)
Related Topic(s): Disaster Earthquake; Disaster Nuclear; Disasters; Franklin Graham; Franklin Graham; God; Gods Ambulance Chasers; Humanitarian; Japan; Katrina; (more...) Lady Gaga; Pagan; Pat Robertson; Samaritans Purse; Tsunami, Add Tags  (less...)
Add to My Group(s)
Go To Commenting
The views expressed herein are the sole responsibility of the author and do not necessarily reflect those of this website or its editors.