Compassion, but NO Evangelizing? What is this world coming to? 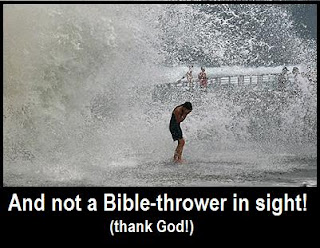 No solar-powered audio Bibles blaring the New Testament like in Haiti. No Scriptural tracts pouring forth from cargo planes like in the Asian Tsunami. No Bibles being proffered ubiquitously to hurricane victims like in Hurricane Katrina's Houston Astro Dome village. God's Ambulance Chasers were strangely absent.

Irene, it seems, just wasn't worth the effort for GACs: not in souls and certainly not in money. It may be that, in their way of thinking, arch-enemy and secular behemoth FEMA was doing too much. True, The Salvation Army and Pat Robertson's Operation Blessing leaped into Irene's aftermath,* but true bible throwers were very, very scarce: Irene just wasn't DISASTROUS ENOUGH!

Of course, their evangelical absence allowed Obama-haters and Tea Partiers to take center stage during the evacuations and relief efforts. The leading man in the FEMA-Is-A-Drag-On-The-Economy drama is, of course, Ron Paul.

Paul said FEMA is bad economics and bad morality. He said the federal government shouldn't be helping people when they do "dumb things". He also claims the agency is unconstitutional and that collecting taxes to fund the agency amounts to coercion.

So being in the path of a hurricane is a "dumb thing"? I guess Mr. Paul might suggest that cities and towns should not be built in the paths of natural disasters: like San Francisco (earthquakes), Galveston (hurricanes), Joplin, MO (tornadoes), Honolulu (tropical storms), Chicago (seiches), Watertown, NY (huge snowfalls) Guerneville, CA (flooding). In effect, Paul's comment is: "Tough, suckers!"

We've done that to this. We now have this woman saying oh, when there's a disaster you've gotta to help. No, we help each other. We are good neighbors to each other. We will provide better help for each other than the government could ever.

Unfortunately, it was Beck villain Franklin D. Roosevelt who proved that the government could indeed mandate compassion - because it had to: too many "Hoovervilles" were dotting the American cities due to a distinct lack of compassion from the rich.

Then, of course, there were the Irene-Is-A-Sign-From-God people at Apocalypse 2011. They are the people who followed Harold Camping into epic humiliation with the Great Rapture Failure of May 21st. And they are supported by the eminent(ly looney-tuned) Cindy Jacobs who says that the earth is so frustrated with sin that it "groans" with natural disasters. To be honest, Jacobs has been hypocritical enough to ask for disaster relief funds and her hands have never touched a shovel for mucking out the homes of hurricane victims.

Perhaps the foremost reason GACs stayed away from relief efforts is that they no longer consider American disasters to be a fertile field for conversions. A "Christian Nation" doesn't really need solar-powered Bible blasters any more, does it? Katrina was the last real chance to prominently preach because, of course, it had been caused by the gays in New Orleans and their orgy/party "Southern Decadence." Their target for righteous indignation was tailor-made. Irene's path, however, made it difficult to pinpoint a particular group or religion or mythical beast** so the general "America's sin is just asking for it" meme falls behind in impact. Way behind.

So what Irene hat wrought may not be the end of God's Ambulance Chasers as much as a realization that they know when they're outnumbered by people of compassion.

Rev. Dan Vojir is has been writing/blogging on religion and politics for the better part of ten years. A former radio talk show host (Strictly Books " Talk America Radio Network) and book publisher, Dan has connected with some of the most (more...)
Related Topic(s): Cindy Jacobs; Glenn Beck; Gods Ambulance Chasers; Hurricane Irene; Ron Paul; Stupidity, Add Tags
Add to My Group(s)
Go To Commenting
The views expressed herein are the sole responsibility of the author and do not necessarily reflect those of this website or its editors.