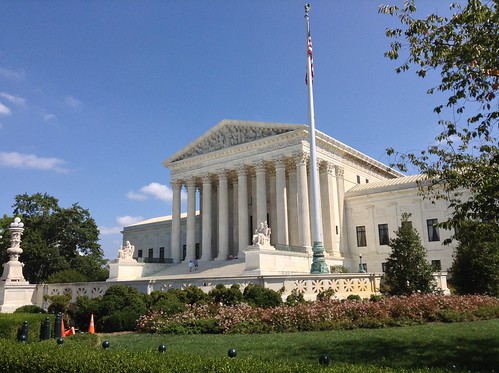 The U.S. Supreme Court recently ruled that it would not decide whether gerrymandering was constitutional or not, and left it to the states to decide. This ruling is contrary to more than 200 years of American jurisprudence. In the landmark ruling of Marbury v. Madison, 5 U.S. (1 Cranch) 137 (1803), the Supreme Court ruled that the Supreme Court had a duty to say what the law is and a duty to rule on constitutional issues. The Supreme Court has reaffirmed this principle and applied it to elections and the rights of voters to be counted equally. In Baker v. Carr, 369 U.S. 186 (1962) the court ruled that the constitution required one man's vote to equal another's. In that case, the court ordered Tennessee to establish equal voting districts so that each constituent's vote weighed the same.

In the case allowing gerrymandering, Rucho v. Common Cause, the Supreme Court did not say that it was overruling Baker v. Carr, but it actually overruled it concerning cases from Maryland and North Carolina. The court ruled that gerrymandering presented a "political question" and that it would not decide the constitutional issues it for that reason.

Gerrymandering is the deliberate manipulation of legislative district boundaries to give a disproportional advantage to a political party or racial group. In 1812, Governor of Massachusetts and future Vice President Elbridge Gerry notoriously approved irregularly-shaped congressional districts that the legislature had drawn to aid the Democratic-Republican Party. The moniker "gerrymander" was born on March 26, 1812 when an outraged Federalist newspaper, the Boston Gazette, observed that one of the misshapen districts resembled a salamander.

The political question doctrine is a judge-made principle that allows courts to duck important issues. In many undemocratic nations, where the courts are not independent, they are controlled by the ruling party, or by a single dictator. In China, for example, courts leave political decisions to the Communist Party. The People's Court in Transition: The Prospects of the Chinese Judicial Reform, Qianfan Zhang. In other words, China is the home base for the political questions doctrine courts there do not decide political questions. By abdicating its authority and ducking the issue of gerrymandering, the United States Supreme Court is undermining democracy and turning the United States into a banana republic.

For the first time ever, this Court refuses to remedy a constitutional violation because it thinks the task beyond judicial capabilities.

And not just any constitutional violation. The partisan gerrymanders in these cases deprived citizens of the most fundamental of their constitutional rights: the rights to participate equally in the political process, to join with others to advance political beliefs, and to choose their political representatives. In so doing, the partisan gerrymanders here debased and dishonored our democracy, turning upside-down the core American idea that all governmental power derives from the people.

Light at the End of the Tunnel

Together with the Court's horrendous decision in Citizens United(where the court allowed unlimited spending on elections by wealthy contributors) the Supreme Court has reinforced a wealthy minority's ability to legislate against the majority, turning American's democracy into a wealthocracy.

These two decisions are amongst the worst decisions of the Supreme Court. However, they can be overruled by a constitutional amendment, or by a new Supreme Court, appointed by a new president who is not named Trump, or by state courts. Justices Kavanaugh and Gorsuch, Trump's only appointees, joined the other Republicans on the bench and ruled that gerrymandering was a political decision that they would not decide. "One man, one vote," may now be delegated to the garbage dump of history.