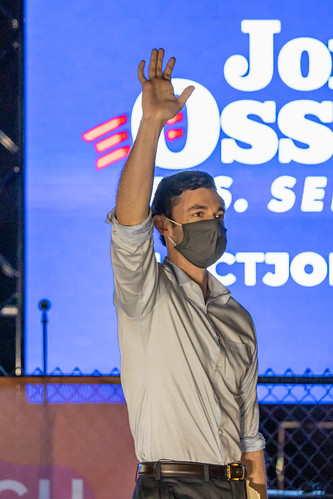 The battle for the Senate is far from over.

Both of Georgia's Senate races are going into runoffs, as no candidate in either race received more than 50 percent of the vote.

The winners of the races, and -- therefore -- control of the Senate, will be decided on January 5th. If both Warnock and Ossoff win their races, the Senate is tied 50-50. And with Kamala Harris as Vice President, she'll have the tie-breaking vote.

Here's what you need to know about the Republicans defending their seats.

Kelly Loeffler has used her brief tenure in Congress to praise Trump at every turn, ignore the needs of her constituents, and protect her own bottom line.

In April, it was reported that she made millions of dollars worth of stock trades before the public knew about the severity of the coronavirus pandemic and the likelihood of a stock market crash. She began making trades the same day Congress received a classified briefing about the virus, and just four days later she accused Democrats of fear-mongering about the virus and parroted Trump's line that everything was under control. She has denied knowing anything about the trades, but the whole saga reeks of corruption.

Senator David Perdue also began making suspicious stock trades on January 24th, the day of the classified briefing. That same day, he bought stock in DuPont, a chemical company that produces personal protective equipment. Throughout the pandemic, he joined Loeffler in praising Trump's deadly response and downplayed the virus to the public.

Perdue and Loeffler represent one of the worst tenets of today's GOP: governing for personal gain while ignoring the needs of their constituents.

They're also emblematic of the party's overt racism: Loeffler called the movement for Black lives and racial justice "divisive" and claimed it "seeks to destroy American principles," and Perdue recently went viral for intentionally mispronouncing Kamala Harris' name at a Trump rally.

Loeffler has even been endorsed by right-wing extremist Marjorie Taylor Greene, a QAnon promoter with a history of making racist comments.

Oh, and they're happy to parrot Trump's baseless claims about voter fraud, even calling on Georgia's Republican Secretary of State to resign because of supposed "failures in Georgia elections this year" -- without providing any evidence of what those failures were.

Georgians deserve better. They deserve senators who will fight for them in Washington -- they deserve the leadership of Raphael Warnock and Jon Ossoff.

Related Topic(s): Georgia Election; Georgia Politics; Senate; Senate Senators; Voting, Add Tags
Add to My Group(s)
Go To Commenting
The views expressed herein are the sole responsibility of the author and do not necessarily reflect those of this website or its editors.