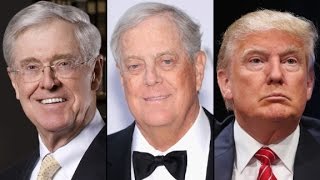 Few matters more powerfully prove the crisis of modern conservatism than the attack against the Koch brothers by President Trump, who calls them "a total joke."

As a Kennedy Democrat, my view is that when Trump clashes with the Koch brothers, the world is a better place. That's because the world more clearly sees the hypocrisy and phoniness that currently corrupts the great philosophy once known as conservatism.

One of the reasons I have repeatedly praised George Will, the conservative columnist at the Washington Post, is that he has stood up with clarity and conscience against the collapse of modern conservatism created by the politically reactionary and morally corrupt presidency of Trump.

That is why I offered high praise to former President George W. Bush, no matter how much I disagreed with him throughout his career, for his sweeping and cogent criticism of the Trump presidency.

That is also why I offered high praise to principled voices such as Joe Scarborough, Max Boot, Steve Schmidt and others who have spoken out, as Will has, with clarity and courage.

True conservatism stands for reducing deficits rather than raising deficits to catastrophic and disastrous heights.

Make no mistake, George Will disagrees with most of the views I hold, but he represents a true, honest and principled conservatism that Trump is determined to destroy while many "conservatives" march in lockstep behind him.

The Koch brothers, by contrast with Trump, take certain positions that reflect an honorable conservative viewpoint. While I have supported a stronger trade policy than free-trade Republicans or Democrats, the Koch brothers are entirely right to oppose the reckless and radical trade wars that have defined the Trump presidency.

Similarly, America desperately needs an enlightened bipartisan immigration policy, which Democratic leaders and the Koch brothers are entirely right to champion and Trump is radically wrong to attack.

I have known for many years prominent people across the ideological landscape of American politics, from the left to the right, but I have never known one person from either party who has described the Koch brothers as a "total joke," as Trump now does.

Related Topic(s): Conservatives; Crisis In Confidence; Koch Brothers; Republicanism, Add Tags
Add to My Group(s)
Go To Commenting
The views expressed herein are the sole responsibility of the author and do not necessarily reflect those of this website or its editors.