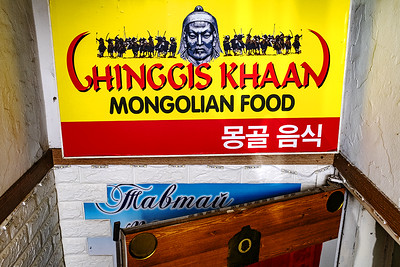 Near my guesthouse in Busan, there's a Mongolian restaurant, Chinggis Khaan. On its sign, there's a portrait of the conqueror, looking stern, with a lineup of archers on horseback, behind him.

Though I had walked by Chinggis Khaan many times, I never entered because I thought it was probably some jive joint, run by Koreans. Located in a basement, it offers no clues to what's inside.

Seeking a respite from kim chi, I finally entered Chinggis Khaan yesterday, to discover that it's practically a shrine to Mongolian nationalism.

Soon as I opened the door, I saw the baddest man ever staring back at me, and flanking Genghis were eight other khans. On a side wall was the Mongolian flag, and a television playing Mongolian music nonstop.

One had "Chinggis Khaan, Chinggis Khaan" as its refrain. With so much rousing, badassed music, it was impossible to focus on my mutton. I just felt like standing up on metal stirrups to shoot arrows at anything that moved.

One of Mongolia's top bands, The Hu, derives its name from Hunnu, or Huns. In the accusatory "Yuve, Yuve, Yu," they growl:

In Mongolia, Genghis Khan is back all right. Just outside the capital is a 131-foot equestrian statue of the man, and Mongolia's highest honor is The Order of Genghis Khan, of which only one is awarded yearly. The Hu is its latest recipient. It wasn't long ago that Mongolian scholars of Genghis Khan were killed by the Soviets. Their crime? Nationalism.

For Genghis Khan's 800th birthday in 1962, Daramyn Tomor-Ochir authorized a celebration. As the second highest member of the politburo, he felt secure, but just like that, Tomor-Ochir was kicked out of the party, jailed, sent into internal exile, given only lowly jobs then finally murdered in 1985 with an ax, his killers never caught. As a rising Communist, Tomor-Ochir had denounced Byambyn Rinchen, a leading scholar and writer, for his nationalism.

Internationally, the Great Khan is also enjoying a revival, though in 1992, Time Magazine still listed him as the worst villain of the last millennium, with Tamerlane coming in second. Is there an anti-Mongol/Turco/Central Asian/nomadic bias here? Someone alert the Anti-Defamation League and National Association for the Advancement of Colored People! Yellow horde lives matter! At least Attila the Hun didn't make the top ten.

In 1995, however, the Washington Post simply crowned Genghis Khan as Man of the Millennium, period, beating out Christopher Columbus.

In an often cheeky editorial, Joel Achenbach rhapsodized, "Genghis Khan was a doer ["] Genghis Khan reached out and touched countless lives. Ended them, in fact ["] Like Columbus after him, Genghis Khan shrank the world ["] He and his descendants created a vast free-trade zone across Eurasia and greatly enhanced the linkage between the civilizations of the East and West ["] The Mongols ["] pioneered global communications seven centuries before the invention of the Internet." Genghis Khan was a pioneer of globalism, in short.

In his 2004 book, Genghis Khan and the Making of the Modern World, Jack Weatherford elaborates:


In American terms, the accomplishment of Genghis Khan might be understood if the United States, instead of being created by a group of educated merchants or wealthy planters, had been founded by one of its illiterate slaves, who, by the sheer force of personality, charisma, and determination, liberated America from foreign rule, united the people, created an alphabet, wrote the constitution, established universal religious freedom, invented a new system of warfare, marched an army from Canada to Brazil, and opened roads of commerce in a free-trade zone that stretched across the continents. On every level and from any perspective, the scale and scope of Genghis Khan's accomplishments challenge the limits of imagination and tax the resources of scholarly explanation.

Unlike a wealthy, slave-owning planter like Thomas Jefferson, Genghis Khan had been a slave, and he beat the American by nearly six centuries in establishing the rule of law and religious freedom. Granted, dude wrote nada, since he couldn't write, but he porked many more babes than the philosophical Jefferson, for sure, and it's doubtful he bothered with courtship. Where's #Me Too on this? According to Oxford University, Genghis Khan has 16 million descendants.

Related Topic(s): Genghis Khan; Thomas Jefferson, Add Tags
Add to My Group(s)
Go To Commenting
The views expressed herein are the sole responsibility of the author and do not necessarily reflect those of this website or its editors.