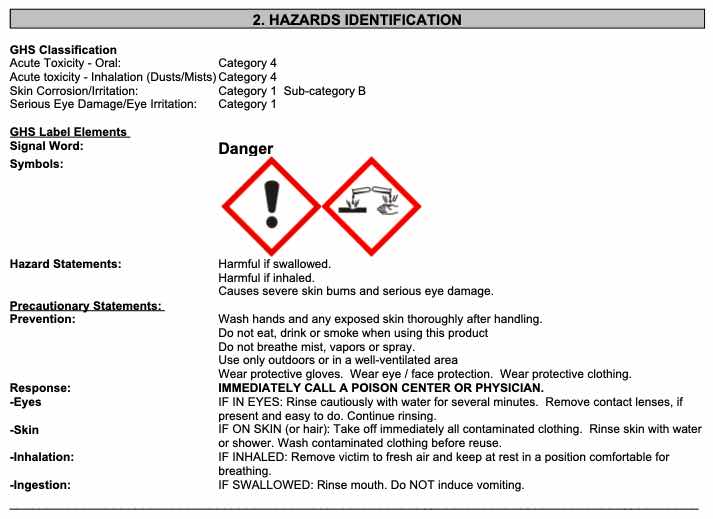 As the first and hopefully only presidential term of Donald Trump nears its November 3 moment of truth, the accusations of fascist or even Nazi tendencies and actions by him and his administration have multiplied.

But this latest one I'm calling out is particularly horrific: The use of a powerful "for industrial use only" disinfectant called HDQ Neutral on captive immigrants at the Adelanto ICE Processing Center, a Trump administration-funded for-profit detention center outside of Los Angeles, CA.

According to a report in the Independent, a UK newspaper, the powerful toxic ammonia-based chemical made by Spartan Chemical Co. is being sprayed as often as 50 times per day in the crowded detention facility despite company warnings on the label that it only be used near people if they are outdoors or in a well ventilated space, not in confined spaces. Worse yet, there are allegations from detainees that the sprays of the chemical are being aimed directly at them, though the company's label warns that exposure to the eyes can cause "permanent eye damage" while inhaling it can cause lung damage , breathing difficulty and asthma.

The Nazi connection? As Charles Vidich, author of a powerful and timely new book due out later this year on the history of quarantines in the US, dating back to the earliest days of the Colonies in the 1600s and down to the present (Germs at Bay, Praeger), notes, Zyklon B, the extermination gas of selected by Hitler's Third Reich for its extermination camps, was actually a powerful cyanide-based insecticide invented during the early 20th Century. It was for decades, well into the early 20th century, used to fumigate ships engaged in international trade in order to kill rats, mice, fleas and other vermin. The Nazis adopted a variant of the product to slaughter Jews, Gypsies, Communists, people with deformities or retardation, and other "undesirables" during the war years.

Now we have the administration of Donald Trump, whose own family had a history of Nazi sympathies and who himself has referred to Nazi demonstrators in the US as "good people," similarly using an insecticide/disinfectant that is highly toxic and life-threatening on detained immigrants awaiting deportation

.Investigations by Reuters, an organization called the Shut Down Adelanto Coalition and a not-for-profit legal organization called Earthjustice, have learned that immigrants locked indoors in detention at Adelanto have been getting sprayed "as often as every 15-30 minutes," sometimes directly at them, with a chemical that the company says should only be used outdoors or in well-ventilated areas. They are reporting rashes, nosebleeds, nausea, headaches and breathing difficulties among other symptoms following the spraying.

I must point out that when I first learned about the vicious way African slaves were treated in the colonies and later in the United States by their owners, it struck me, even as a youngster, that it was strangely worse than these white owners treated their own beasts of burden. I wondered at that, only coming to understand later as I got older, that the abuse of slaves the whippings, the starving, the over-working, etc. was a control mechanism, a dehumanization process of both owner and slave that wasn't necessary in dealing with horses or cattle. I recognize that the same analysis applies to the way ICE and its detention center contract employees cruelly abuse their immigrant captives.

HDQ Neutral thankfully isn't as toxic as the Zyklon B gas used by Nazi death squads at the German extermination camps, but what is being done is still a grotesque chemical assault on America's "undesirables," differing from the Nazi efforts against their human victims only in degree. The inhumanity of the overlords administering this toxin to their captive victims is little different from that which was punished, often with death sentences, in the Nuremberg Trials that followed World War II.

One can only hope that when this Trumpian nightmare is over in the US, Donald Trump and his criminal henchmen in the Homeland Security Department will be similarly hauled before a court to face crimes against humanity charges for their abuse of immigrants, including young children, as well as for their other grotesque crimes.

DAVE LINDORFF is a member of ThisCantBeHappening!, the uncompromised, collectively run, six-time Project Censored Award-winning online alternative news site. His work as well as the work of the other members of the collective, can be found at www.thiscantbehappening.net

Related Topic(s): Fascism, Add Tags
Add to My Group(s)
Go To Commenting
The views expressed herein are the sole responsibility of the author and do not necessarily reflect those of this website or its editors.