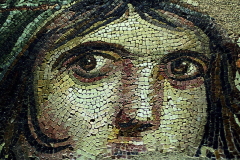 g a i a
(Image by Zeynep)   Details   DMCA
We were warned a long time ago by Emperor Marcus Aurelius (121 CE-180 CE) that all of Nature is sacred; and to harm any living thing, even the poorest and weakest among us, is to harm ourselves. We are as much a part of Nature as the rest of the flora and fauna, not superior, godlike beings entitled to take ownership of Mother Earth and her progeny to rape and plunder at will. Cultivate reverence and humility, Marcus enjoined us, and take care not to incur the wrath of the gods.

We've known for a long time that our way-of-life, based on greed and inordinate consumption, is unsustainable. The effects of global warming are increasingly manifest in violent storms, rising oceans, melting glaciers, floods and desertification. Most scientists believe that the climate change we're experiencing results largely from human activity, starting with the industrial revolution. The fossil fuel industry, on the other hand, has many of us believing that it is a hoax, so we go right on fiddling while Earth burns.

I believe that Marcus would tell us we're skating on thin ice. Witness the widespread destruction of animal habitats. Some experts report that possibly as many as 10,000 species are presently undergoing extinction. In religious terms, we continue to desecrate God's Creation, quite possibly beyond repair. Let us pray that some parts of it are still salvageable, and that God is forgiving.

Consider also the endless and unnecessary wars we continue to wage. The sky's the limit when it comes to what we as a country are willing to spend on weapons of mass destruction (WMDs) and unprovoked wars of aggression to protect American interests. But wait a minute. Do Americans value death and destruction more than life itself? Judging by the $936 billion that now goes to the Pentagon, Overseas Contingency Operations (OCO), and other support programs detailed in the 2020 Budget, it appears that we do. Or is it mainly the Top One Percent (TOP) whose interests are represented in the national budget?

Bi-partisan campaign rhetoric notwithstanding, the ruling class does not view it as being in America's interest to provide food for the hungry, medical care for the sick, education for our children, safe highways and bridges to travel on, or even potable water for those who can't afford to buy Perrier. My conjecture is that the one percent are wont to define America's interests as commensurate with their own. They tell us that the vast military apparatus that we've stationed all over the world, and the endless procession of regime-change wars we pursue, somehow serve the national interest.

Even now, the Democratic Party establishment continues to support Donald Trump's rapacious regime-change policy in Venezuela in hopes of gaining access to its vast natural resources, mainly oil. It is easy to point the finger at Donald Trump, Joe Biden, Nancy Pelosi, and others, but Americans have been pursuing an increasingly imperialistic role in the Americas since the mid-19th century, while invoking the Monroe Doctrine.

Some say that Gaia's mad as hell. With an uncontrolled global pandemic upon us, one might naturally wonder if we've despoiled and abused Mother Earth for so long that she's finally run out of patience and decided to teach us a lesson. We're told that the covid-19 virus could get worse, that there's no vaccine in sight. Even now, the relentless pandemic robs us of our community, our economy, even the company of our loved ones, some of whom lie dying in isolation wards, and some of whom have passed away.

Many family members are beyond our reach because we are, of necessity, isolating ourselves at home, many of us on borrowed time: that is, until the evictions begin for nonpayment of mortgage or rent. As businesses close their doors, some forever, millions of people are put out of work, and every day the food lines grow longer. With the specter of another Great Depression looming, we can anticipate that if or when that happens, suicide rates will rise sharply.

We've been sowing the wind for a long time, and we're not alone in this. Is the whole world now reaping the whirlwind? Perhaps we're beginning to learn what results from the sin of hubris, a violent pride so inflated that it leads those in power to rank themselves superior to the gods and to exempt themselves from Divine law, meaning the law of the gods, the law of Moses, or natural law, depending on one's religious perspective. The ancient Greeks viewed hubris as the cardinal sin, because it invariably ends in high tragedy.

Part 2 will consider what might be done now to alleviate widespread suffering, and where we might go from here.

Meredith Ramsay is a political science professor, now retired from UMassBoston, where she also served as Associate Dean of the Liberal Arts Faculty. She is a writer, musician, gardener, and amateur photographer. Her latest book is Community, (more...)

Related Topic(s): America; Capitalism Over Humanity; Classics; Climate; Community; Gaia Theory; Habitat; Hubris; Humanity; JOURNEY; (more...) Moses; Nature; Pandemic; Suffering; The_gods; Tragedy; Wisdom, Add Tags  (less...)
Add to My Group(s)
Go To Commenting
The views expressed herein are the sole responsibility of the author and do not necessarily reflect those of this website or its editors.

STAY IN THE KNOW
If you've enjoyed this, sign up for our daily or weekly newsletter to get lots of great progressive content.
Series: "A Journey onto Unfamiliar Ground"

Have We Hit Bottom Yet?