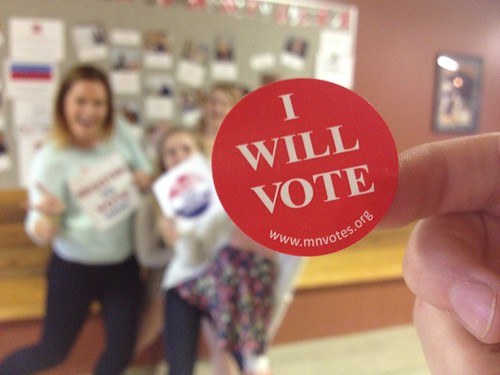 GOTV Plus: How to make sure they do!
(Image by iLeadMN)   Details   DMCA
GOTV Plus: Revisiting How to frame it "American" Now

If you are doing GOTV this fall, you will be given a party script, of course. But it's always good to have some more ideas about what else to say, if you get into a real conversation. So here is some review on how to "speak American" now. These days the political framing challenge we face is greater than any we've faced in a long time. While it is absolutely vital to avoid repeating the frames, words, and memes our president tweets or uses in any way, shape, or form, even to negate or critique them, there is a great deal more we need to do. It's equally important now to have something positive to suggest first, even if you follow it with a critique of what's going on now. Once we have accepted these rules, the next challenge appears: what positive things can we suggest or demand that will have broad appeal in our fiercely divided nation right now?

As I mentioned in an early 2017 blog, http://metaphorproject.org/getting-heard-beyond-the-choir/, Americans generally want to "protect our freedom, things to be fair, people in government and out to play by the rules, economic prosperity that benefits everyone, and our communities to be clean, safe, and secure. We all want practical solutions to our problems that work for everyone, and we all want to be able to keep up with other countries in the global economy."So even though we may seem very divided and suspicious of each other now, there is also a growing number of citizens who think we are "on the wrong track." Moreover, we still have the rigged economy, relative wage stagnation, and widespread fear about our economic future that led in part to the 2016 voter revolt. Add to that the already astounding damage of Trump's ignorant, out of date tariff ideas (see this excellent article for details), unchecked by a terrified and supine GOP. Then there are other new voter worries: about GOP threats to our healthcare coverage re pre-existing conditions, rising gun violence in our schools, and the robber baron GOP tax bill. Rampant corruption via misuse of office in D.C., and even more sickening, vicious ICE child abuse on our border complete the picture. So there is lots of widely shared concern that could find a voice in November.

True, there are GOP extremists on the right who are cool with all of above, but the real task we have is finding out what our own particular audiences want. There are tried and true rules for doing that. The first step in thinking about that is being clear about our audience's hopes, feelings, and the language they use to express themselves. What they may also be feeling right now is despair and hopelessness, as well as rage and helplessness. If we feed people's rage and despair with an angry, negative, sarcastic, or ironic remark, it won't move them to vote. What's needed most is talk about what we want instead.

So after we've after we've gotten clear about where our audience is, we need to reconnect with a vision of the American future we all want. Fleshing out the details of how our positive vision can solve a current problem is vital. Describing who could carry out these tasks and how they might do it is a key part of GOTV. Remember to stick with words that are colloquially "American." No abstract multisyllabic, Latinatewords like those two. Our talk must also be free of a lot of facts, stats, or historical references. It should be aspirational instead, a quality that communications research has shown works best. For example the word "rules" evokes a key part of the Ideal American Identity story,our being a country ruled by law, with fairness and equality of opportunity for all. So we can say things like "Restore/Bring back/ Save/Protect the rules that keep America clean/safe/pure/protected from bank/Wall Street/corporate/abuse/ etc." Or". "the rules that keep America fair," and the ones that "protect equality of opportunity for all."

To help everyone find the right American words to express our stories, the Metaphor Project offers two lists of memory joggers, The American Story Elements and American Metaphor Categories. These tools can help us recall suitable language, (images, popular metaphors, catch phrases) we already know implicitly. They can stimulate us to identify others as well. Combining these with our positive solutions in a brainstorming process can create "American truth bites" that take a variety of forms. Some may use tried and true variations of familiar phrases ("change course" instead of "stay the course"), while others reframe familiar phrases more effectively ("Say gun safety, not gun control!") Instead of saying "no X," which cognitive scientists tell us is heard as just "x," we can say "Y [something we want], not X." It also works to combine familiar elements from widely disparate sources to create a brand new idea ("community rights" or "marriage equality"). Then there's creating new words and ideas by combining familiar elements in a single new word ("frankenfood" from Frankenstein + food).

Thinking about what we are saying and how it might sound to someone else is key. Venting, being negative, subtle, sarcastic, or ironic fails to create positive momentum in a dire political moment like this. We need to be objective when we decide if our GOTV messages can meet the following tests: Can they go viral? Are they truly mainstream, not just party or progressive jargon, self-defeating in-group humor or insults? Are they concrete, not abstract? Do they evoke a familiar ideal American story and point to a positive idea? VIP, do they have rhythm? Say them out loud to find out, before using them anywhere! (To see more about how these and other criteria for successful American political framing, see How to Write Slogans That Move)

Now more than ever, we must "speak American!"

Susan C. Strong, Ph.D., is the Founder and Executive Director of The Metaphor Project, http://www.metaphorproject.org, and author of our book, Move Our Message: How to Get America's Ear. The Metaphor Project has been helping progressives mainstream their messages since 1997. Follow Susan on Twitter @SusanCStrong, check out her TEDx talk, and like, follow & review The Metaphor Project on Facebook.

Related Topic(s): Equality; Fairness; Future; Government; Metaphor; Progressives; Prosperity; Rights; Rules; Slogans; (more...) Truth; Work; Work, Add Tags  (less...)
Add to My Group(s)
Go To Commenting
The views expressed herein are the sole responsibility of the author and do not necessarily reflect those of this website or its editors.