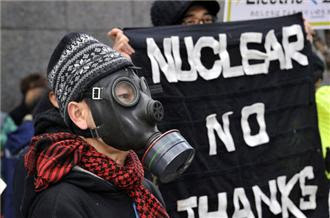 The Global Network mourns for the people of Japan following the recent disastrous chain of events that began with the earthquake, tsunami and then the nuclear power plant. Sadly Japan is now the victim of three gargantuan nuclear disasters: Hiroshima, Nagasaki, and Fukushima.

The Fukushima nuclear disaster in Japan tragically demonstrates, again, the dangers of nuclear power, an energy source that must be abandoned--as a clear and present threat to life. Instead there must be full implementation of safe, clean energy technologies --- which are here today.

The Global Network Against Weapons & Nuclear Power in Space has long challenged the use of atomic energy in space. The network has emphasized that there are safe alternatives to energize space devices. In recent times, NASA, at long last, has begun substituting solar energy for nuclear power in space. Indeed, in coming months NASA's solar-powered Juno spacecraft will be launched on a five-year mission to Jupiter. It was not long ago that NASA emphatically insisted that solar power could not substitute for nuclear beyond the orbit of Mars. Suddenly, it now can be done.

Likewise, as numerous studies have documented, safe, clean, renewable energy technologies now here can provide all the power we need on earth. Nuclear power and its deadly dangers are unnecessary. As the conservative scientific magazine, Scientific American, in its October 26, 2009 cover story, "A Plan for A Sustainable Future," declared, "Wind, water, solar technologies, [and conservation] can provide 100 percent of the world's energy needs."

The issue of switching to safe, clean energy is not technological -- it's political.

The problem involves vested interests: the government agencies which push nuclear power, notably in the United States the national nuclear laboratories and the entity that owns them, the Department of Energy (headed currently by a former national nuclear laboratory director), and the nuclear industry as it seeks to profit from selling nuclear technology despite the cost in people's lives.

These same entities are pushing nuclear power world-wide as evidenced by GE's involvement in the construction of Japanese reactors and the recent U.S.-India Nuclear deal. China and other emerging nations are also expanding plans for nuclear power despite the horrific memories of Chernobyl and now Fukushima.

A disgrace in demanding nuclear power on earth and space has been President Barack Obama. As president, he has reversed the critical position he espoused as a candidate and now, even in the wake of the Fukushima disaster in Japan, is seeking to "revive" the nuclear industry with the building of new nuclear plants using billions of taxpayer dollars. Meanwhile, his administration has been pushing to also "revive" the use of nuclear power in space by restarting U.S. production of Plutonium-238 for use on space devices.

The Global Network Against Weapons & Nuclear Power in Space calls for:

And, meanwhile, a concentrated effort could -- and must -- be made to swiftly bring the safe, clean energy technologies on line. Instead of promoting nuclear power expansion globally the nuclear power industry should be dismantled or converted to a green technology industry.

* The end of nuclear power in space. Accidents such as the 1964 SNAP-9A disaster in which a plutonium-powered satellite fell from orbit, disintegrating and spreading the plutonium widely -- a plutonium release long seen as causing an increase in lung cancer on earth -- have demonstrated the folly of using nuclear power overhead.

* The closure of all national nuclear laboratories. They have been breeding grounds for developing lethal atomic energy -- on earth and in space. There's an effort now underway in Washington to cut back on the federal government spending. Here is a federal government activity that must be cut back -- a string of national nuclear laboratories, including Los Alamos, Oak Ridge, Lawrence Livermore, Idaho, Sandia, Brookhaven, Lawrence Berkeley, Argonne, spending billions upon billions in taxpayer money annually while developing deadly nuclear technology.

Unless the nuclear juggernaut is stopped, we all live in Hiroshima, Nagasaki and Fukushima.


Global Network Board of Directors & Advisors:

Related Topic(s): Disaster Earthquake; Energy; Fukushima; Nuclear Disarmament; Nuclear Energy- Weapons; Nuclear Proliferation; Peace; Plutonium, Add Tags
Add to My Group(s)
Go To Commenting
The views expressed herein are the sole responsibility of the author and do not necessarily reflect those of this website or its editors.